Counting the cost of gender gap in pay 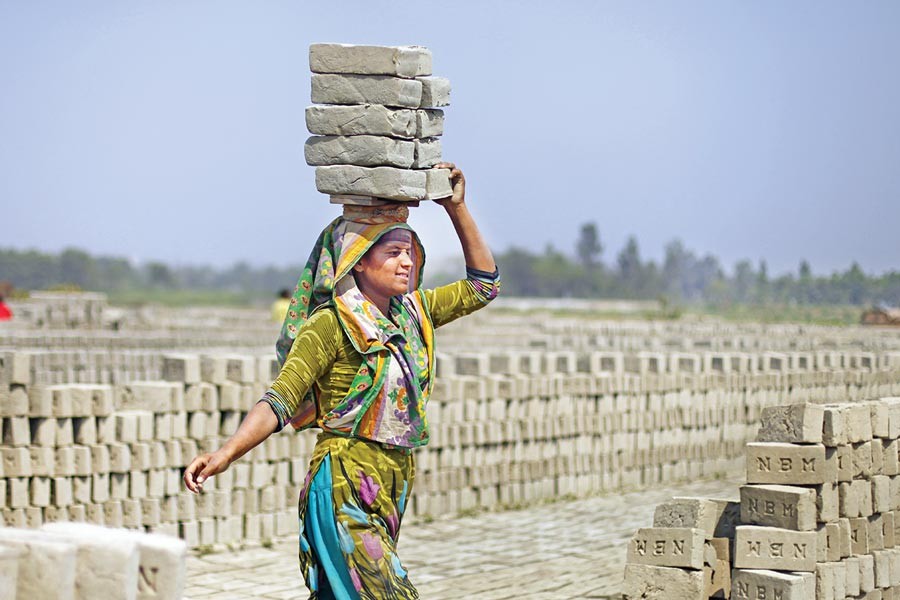 Is the gender gap in pay on the downward trajectory in Bangladesh? The answer could be 'yes' or 'no.' But this gap is not worse in Bangladesh than that in any other South Asian country. In the Global Gender Pay Gap Report-2017 of the World Economic Forum (WEF), Bangladesh ranked 47th out of 144 countries. Among other countries, the Maldives secured 106th position followed by India at 108, Sri Lanka 109, Nepal 111, Bhutan 124 and Pakistan 143.

Although globally women are paid 20 per cent less than the men get, Bangladesh's woman workforce are enjoying pay parity at the entry level of jobs, according to a report of the International Labour Organisation (ILO).

Two recent studies, one by the ILO in 2018 and another by SANEM in February 2019, revealed two aspects of the gender gap in wages in Bangladesh.

ILO findings say the wage gap in Bangladesh does not exist at the entry level of jobs while the SANEM (South Asian Network on Economic Modelling) found the gender-based pay gap ranging from 6.0 per cent to 36 per cent in urban areas of Bangladesh. Although participation of women in the workforce in Bangladesh is increasing gradually, their presence is still poor in the formal sector. At the national level, only 8.2 per cent females are doing formal jobs, according to the Labour Force Survey by the Bangladesh Bureau of Statistics (BBS). 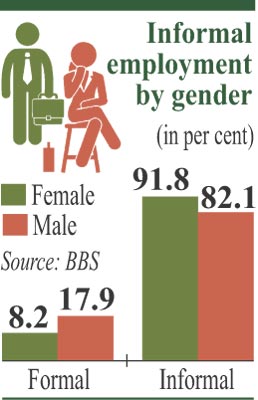 The majority of the women work in the informal sector where the pay gap is significant. Skilled and educated women hardly face the pay gap in the formal sector. Employers who follow the prescribed pay scale, wage board or regulated salary structures for their employees are unable to deprive the female employees of their due wages. However, the employers in unregulated or informal sectors working in the fields like services, construction, agriculture, cricket, teaching, house assistant, beauty parlours, day care centres, etc pay less to women.

It is true that presence of women in the workforce doing low-paid jobs is higher. Some employers prefer to recruit women for doing informal jobs without any job benefits after retirement. The wage differentiation is acting as a deterrent to women joining the workforce. Wage discrimination also discourages them to continue doing their jobs. 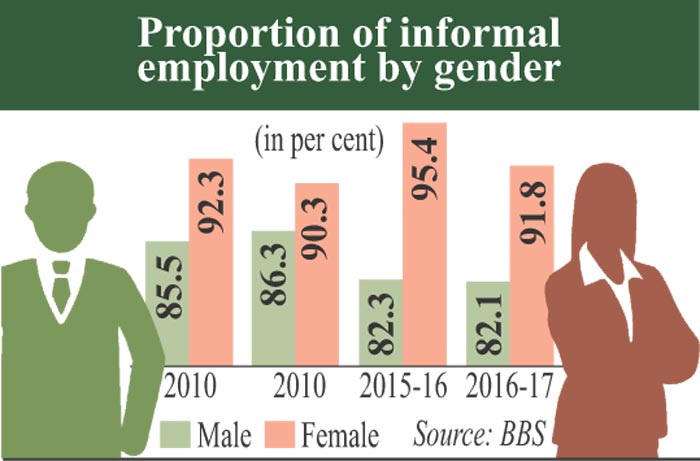 Women have to spend time for household work and also for their children. So their average working hours are less than those of their male counterparts. According to BBS findings, against the 48 average weekly working hours, male workers work 52 hours and their female counterparts 38 hours per week. For many women employees in the formal sector, it seems difficult to work overtime to earn more.

Presence of women in the workforce in the services sector is higher. The BBS findings have revealed that the highest 30.3 per cent women are employed for jobs in the field of services and sales, followed by skilled agricultural work accounting for 23.6 per cent, elementary occupation 14 per cent and machine operations 13.9 per cent.

There is a huge discrimination in wages in some sectors. For example, men cricketers in Bangladesh get nine times higher remuneration than women players. Although women started playing cricket formally under the Bangladesh Cricket Board (BCB) more than a decade ago, there is no formal rise in remuneration for them yet.

It is evident that women are most underutilised in Bangladesh. Many factors work as barriers for women to enter the formal sector of jobs and continue their jobs after marriage. After any childbirth, many of the women, literate or illiterate, are forced to quit their jobs. The situation is almost same in rural and urban areas. Even skilled women face difficulties with building up careers due to lack of social, infrastructural and family support. In Bangladesh, unlike other countries, there are limited quality day care centres at affordable costs.

The women workforce remains underutilised, both in rural and urban areas of Bangladesh. Out of 6.6 million working age underutilised population, women account for 3.5 million. Out of the country's estimated population of 161.3 million, 80.3 million are women. However, they are lagging behind in terms of labour force participation.

In Bangladesh, about 63.5 million people aged 15 and above were in the labour force in 2016-17. Of them, about 20.0 million were females. Women's participation in craft and related trades is relatively high. However, the sector is still unregulated and scattered across the country with huge wage discrimination.

Employers set wages at their will. There is no standard baseline to determine the wages. A benchmark should be set to fix the wages in some growing sectors, both formal and informal, including construction and services sectors. It should be determined by the authorities concerned or the government.