The nightmare for women in city 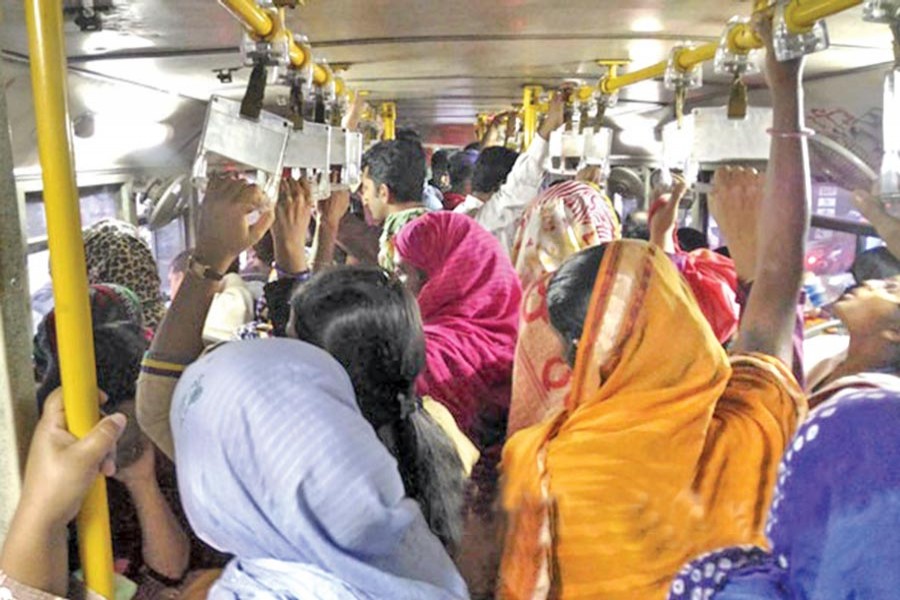 Prapti, Priya and Prokity were standing beside a busy road in the city to catch a bus. After classes, they were going back home like every other days from their college on the Mirpur Road. One after another the buses came in and went away but they could not get on any of them despite passing almost half an hour waiting there. Hardly any bus driver had showed any interest in picking them up.

When all the three class friends finally managed to get on a bus after quarrelling with one bus helper, they found the so-called women's seats occupied by mostly male passengers. So, instead of arguing with them to make them vacate the women's seats, they chose, judging by their past experience, to wait for some time with the hopes that they would get the seats, once the passengers left the bus. But unfortunately it was the peak hour rush and they could not get any seat. Instead, they were trapped inside the bus. Hardly a leg space was left there for them to stand comfortably as the bus helper continued picking up passengers from different points on their way home.

The experience of Prapti, Priya and Prokity is the example of how hundreds of thousands of women suffer while travelling by buses everyday in Dhaka city. Every day, students, workers, office-going ladies and even housewives use buses as their daily mode of transport. But sadly commuters from teens to aged women are often denied any seat on a bus by the bus conductors. Even the passengers inside also do not cooperate. They cite the excuse that there is no seat available for the women.

Actually the number of ladies' seats on a bus is very insignificant compared to the demand. Usually six to nine seats or first two or three rows on one side are set aside for ladies. But most of the times, men are found occupying those seats taking the advantage that women do not board a bus at all bus stops. At the same time, the seats that are available are very uncomfortable as those are on the top of the hot engines.

Prokity, who gets off the bus at Jatrabari regularly, says on an average more than 20 women travel by bus on her route. This number, however, excludes the women who are unable to board any bus as women lag behind men in the fight for boarding them.

Like Prokity, two other friends Prapti and Priya also said that the city bus service did not get better yet, though the demand for the services increased significantly. People of all income groups look for better bus services due to the comparatively low transport costs. But the lack of better service forces many of the women to raise the demand for special seats for them and an increase in the number of seats.

Being young in age, the three college girls do not back the idea of special seats for women, as the services are desirable equally for all. But they do not rule out the reason behind the demand for reserved seats for women facing harassment by bus conductors and in many cases by male passengers.

However, when it comes to the modes of transport like trains and water vessels, the situation of women passengers is no better. Women, most of the time, find it hard to get on an overcrowded train or travel on the rooftops like men. Women from nearby district towns now come to the city in search of jobs and for other purposes. But there is no system that can be called women-friendly, for example, special ticket counters, resting rooms, toilet facilities, seats or compartments for them aboard trains or launches.

With the economic development of the country centring on readymade garments, women's movement in and outside the city has increased significantly. Being a half of the total population, women's participation has increased in all areas, including education, health, labour force and different professions.

According to a study done under the Revised Strategic Transport Plan (RSTP) in 2015, more than 70 per cent of 29 million daily trips were hitched by buses and minibuses. Offices, schools and market places accounted for most of the trips. This indicates how much women dominate the number of trips. It also shows how difficult it is for women to manage seats on any public transport, when the share of buses and minibuses in the total number of transport is only 11 per cent.

The latest Labour Force Survey 2016-17 tells us that women account for 36 per cent of the total labour force. Out of more than 20.1 million youths aged 15-29 in the labour force, 13.1 million are men and 7.0 million women. The RSTP study shows that the growth of female labour force was high during 2002 to 2010. This growth has continued until now and the target has been fixed at least 40 per cent by 2021.

The state-owned Bangladesh Road Transport Corporation (BRTC) and a private bus company now run buses for women during peak hours two times. But this is for only a fraction of the women passengers-office-goers. The number is very insignificant compared to the demand.

Talking to this correspondent, some female passengers of the buses on the Motijheel-Mirpur route expressed their satisfaction. But they said the number of such buses and the frequency at different locations should be enhanced.

Under the RSTP, a mass transit system is being developed in different corridors of the city. It is hoped that with the development, the commuter services will also improve significantly. But the study shows that the demand for buses will remain same. The RSTP recommends bus route rationalisation and a bus service franchise system. Implementation of the recommendations can help bring about a change in the city bus services. The efforts once made by Dhaka North's late mayor Annisul Haq to this end are yet to come to fruition.

Women commuters now favour improving passenger bus services more than raising the number of seats for women. They argue that during any air journey, no woman requires any special seat or care as standard and equal services are made available by all the airlines. The bus services need to be redesigned so that they can suit the necessity of all- ladies, children, elderly people, young boys and girls.