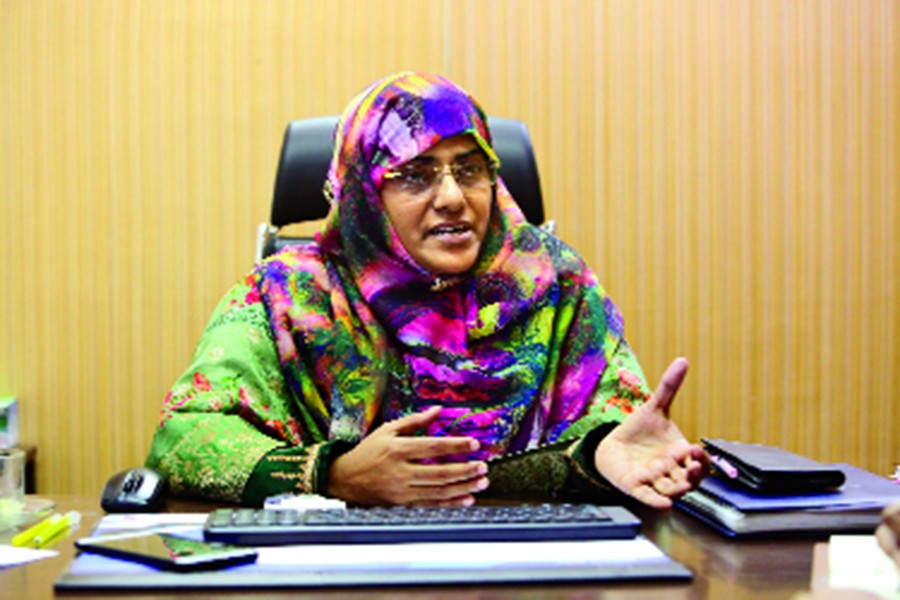 Women need to develop their skill assessing the job market demand to ensure their increased participation in the IT sector, said Khandker Bedoura Mahbub, Vice President and head of IT at the Trust Bank Limited.

The first and only head of IT at a commercial bank in Bangladesh, she shared her experiences and the challenges of her 23-year career in an interview with FE.

Tapping the potentiality of technological advancement is an important tool to enter and survive in the job market, she said.

Many projects along with 11 hi-tech parks are in progress. So the opportunity exists in automation required for all sectors, such as banks, telecommunications, public sectors and also in other areas, she said.

Women can develop their expertise about those new innovations, Ms Bedoura said.

Women will have to focus on the priority sector where skilled workers are needed, she said.

"Private sector would definitely concentrate on profit-making for survival. So, women should develop skill rather than expecting any favour," she said.

However, the job market would find out the skilled women if they can develop skills, she said.

"All of the individuals have some positive and negative sides. Women have to learn from criticism rather than giving up their career for this," she said.

Women should not consider their male counterparts in the office as 'rival' as cooperation from colleagues plays an important role in the career, she added.

"Team work is a vital thing for career development in the IT sector. I have been working as a team leader since 1999," she said.

Ms Bedoura started her career in 1995-96 as a system engineer (apprentice) after completion of her studies on Mechanical Engineering from BUET. She worked with Ali Autos, Leads Corporation, Jamuna Bank, Shahjalal Islami Bank before joining the Trust Bank as head of IT in 2017.

She has taken the challenge of developing expertise in the IT sector after finding the mechanical engineering-related work troublesome for her.

"I have started learning Oracle after my father bought a computer for me. IT sector was completely unknown to me but attracted me strongly to take the challenge. I had to struggle a lot, learn the languages, study for longer hours and deliver the job perfectly," she said.

Both support from the family and office colleagues helped her move forward, she said.

Still, participation of women in the IT sector is 16 per cent in Bangladesh which is 24 to 25 per cent in other countries, she added.

However, it is laudable that around 42 per cent girls are studying ICT at the graduation level, she said.

Participation of women in the IT section of banks is also poor as it is a 24/7 support service and target-oriented job requiring long working hours spent in the office, she said.

In the IT wing of Trust Bank, there are only five women out of 45 employees.

Ms Bedoura said the academic curriculum on IT education have been upgraded incorporating more practical tasks for the students.

"Women are the most trusted, sincere employees and have the unique quality to work under pressure. Better output can be realized through encouraging them in profession," she said.

The safety and security in workplace, flexible working hours, good organisational structure, congenial environment and a smooth commuting system are the most vital aspects that can encourage more women to enter the job market, she said.

Ms Bedoura emphasised focusing more on rural women and encouraging them to build career in the IT sector.

She observed that setting a target to increase participation of women in the IT sector is very important.

In India more than 30 per cent women work in the IT sector and they have set a target to raise it to 50 per cent by 2020, she said.

"Once we set a target and start working towards the target with dedication, at least we will be close to the target," she said.

Ms Bedoura appreciated the role of Trust Bank for recognising her skill and give her the responsibility to lead the IT team of the bank.