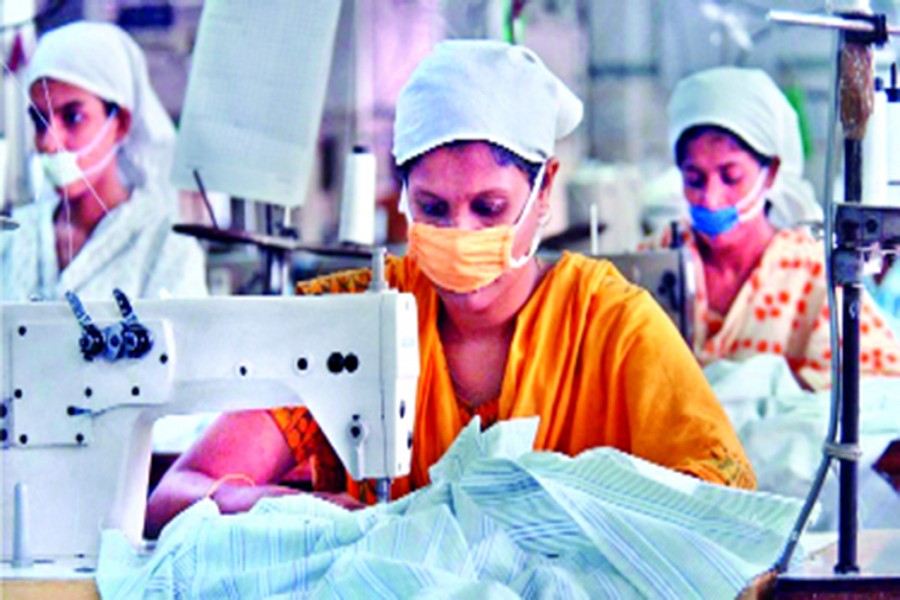 Though very nominal in numbers compared to their male counterparts, women now are seen in some supervisory role in the country's readymade garment (RMG) factories.

A few of them have also started exercising their bargaining power as the elected representatives in their respective factories. Traditionally, male leadership has been at the helm in the trade unions.

Still the scope for women to go up the ladder in supervisory or managerial roles or leadership in union activities in factories remains scanty.

An ILO (International Labour Organisation) baseline study published in 2017 on Bangladesh ready-made garment sector found that women despite making up 54 per cent of the RMG workforce, only 9.0 per cent of all supervisors and 4.5 per cent of factory managers are women.

Survey revealed that share of female employment in upper and middle grades is raising slowly particularly those belonging to grade III, grade IV and grade V. However, their presence in top grades remains scanty.

The sewing and finishing sections are still dominated by women having more than 70 per cent and 58 per cent representation respectively.

Labour leaders, however, argued that many women workers don't have the desire to go up while the factory managements hardly place their full confidence on female workers in those supervisory and managerial positions.

Female workers opined that they did not have much time as they have to maintain their family and household chores after their long working hours.

Moreover, they find meeting both ends difficult after their marriage especially after child-birth in absence of child care centres and congenial factory atmosphere.

Employers' perception about female workers is also responsible for women workers failing to go up the ladder. There is perception that women are physically less capable of carrying load. That is why they are not chosen for promotion to upper positions in factories.

Female workers who are less knowledgeable about operating different modern machines compared to their male counterparts need to be trained and factory management should also provide friendly environment and change their mindset toward their female workers.

A Karmajibi Nari study found that discriminatory practice with regard to promotion of women in upper position is widespread.

About 87.9 per cent of their surveyed workers reported discrimination regarding promotion while some 11.2 per cent workers were not aware of this issue.

Taking the situation into consideration, the ILO in cooperation with IFC (International Finance Corporation) launched a programme called Gender Equality and Returns (GEAR).

GEAR is a special initiative of the Better Work Bangladesh. It aims at promoting career progression opportunities for women workers in the garment sector by offering them 10-day training packages on soft and technical skills.

After completing the course, the trainees spend six to eight weeks working on a production line, as a trainee supervisor, alongside an experienced supervisor.

Rolled out in 2016, GEAR has trained 144 female sewing operators, 160 managers, and 341 lower-level managers in 28 factories during its initial pilot phase.

A total of 58 out of 144 female sewing operators were promoted to supervisory roles.

In 2019, the initiative was scaled up to additional 26 units to train a further 106 female sewing operators, of whom 79 have now been promoted to supervisory positions in 12 RMG factories.

Female supervisors trained under GEAR also saw - on average - a 39 per cent increase in salary.

Findings from an impact assessment of the GEAR pilot phase revealed that 60 per cent of the GEAR trainees had received an offer of promotion by their managers within weeks of completing the training, and efficiency gains of 5.0 per cent, on average, were observed on all production lines led by GEAR-trained supervisors.