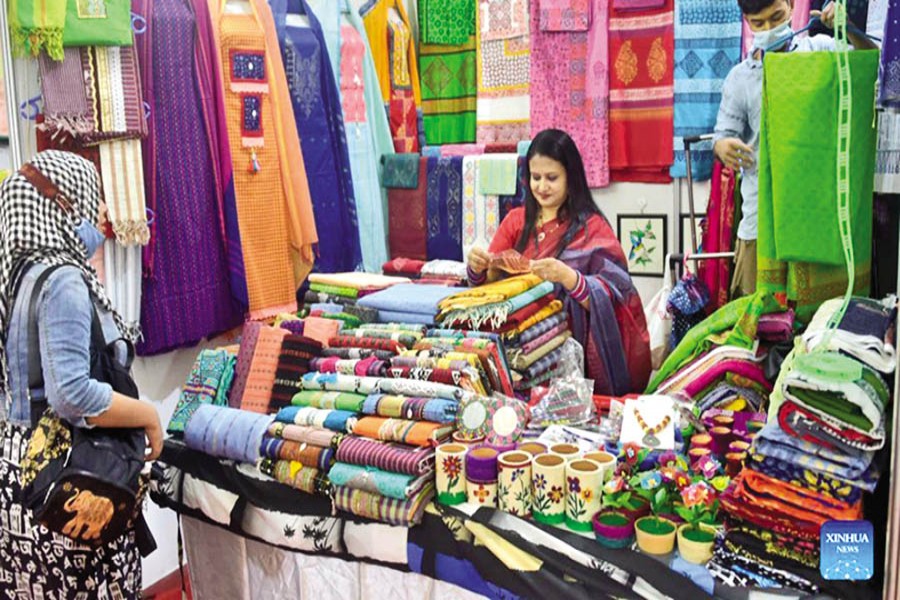 What women do traditionally at homes is now successful business for many men. Billions of dollars worth of industries, namely garments, curry, food industry, catenary services etc are dominant among the successful businesses which are based on what women used to do in stitching dresses for others, cooking or taking preparation to make various kinds of ingredients for cooking. Restaurant business, housekeeping or hospitality are also women arena of works--but economic fruits of those go into men's account.

Despite skills, women's presence in such successful businesses is hardly found on a large scale. Women entrepreneurship is developed with those ideas at micro- and cottage levels, and in some cases, small and medium stages. But graduation still remains a challenge not only in the businesses they enter first but also those where they are supposed to dominate as experts.

Slow graduation of women entrepreneurs is categorically blamed for not taking risk to invest hugely. Women often blame the lack of access to formal banking channel or continuous and time-based policy support for their failure to graduate. Lack of scope for getting diversified markets, product development etc are also common allegations raised behind their backwardness in both traditional and non-traditional areas

With these scenarios, the FE talked to some successful women entrepreneurs, women researchers and experts on the occasion of the International Women's Day and got newer focus on credit system, market knowledge, timely policy support and product development to help women's graduation.

Munnujan Nargis, chief executive officer of Le Reve fashion house, says lack of market knowledge and technique to grab market is absent in women entrepreneurs in many cases. ''Business stands on risk but, at the same time, it is necessary to have confidence in taking risk which cannot be earned without knowledge on various markets, products and technology.''

The Le Reve venture started only a decade ago with the target from the beginning to grab international market, she adds.

So, taking risk in participating in an international fair in Singapore in 2016, she was able to get her Bangladeshi brand in dresses into the highly tourist-dependent country in June 2017. Unlike the readymade garment industry that depends on buyers' order, Le Reve takes Bangladeshi brand to superstores by fusion of the trends in dresses.

''Our team follows international trend in dresses and make fusion to attract foreign buyers,'' says Ms Munnujan. She mentions that La Reve-brand dresses are sold through Lazada online as well as shop-in-shop model with famous brand store of Ishitan and Metro in Singapore.

Le Reve has now a total of 19 outlets, including 16 in Dhaka city, with business in Taiwan, Hong Kong, and Malaysia through Asian popular online fashion portal Zalora.com.my since start in 2009.

Mahmuda Sultana Emon tries to compete with big companies in spices business. She has managed shelves for her special and traditional spice brands in some popular superstores in the country.

Even after overcoming typical day-to-day challenges, Emon's struggle would not end for a lack of policy and new kind of credit supports for business expansion.

Emon shared that market of spices is grabbed by big houses and scope to get it hard for keeping retail prices of their products far below the level of the brands of small investors.

But, to get the market, Emon has compromised her brand name in some cases by helping branding for superstores' own ones. This helped her solve the problem of the gap remaining between share of the stores from retail price of big and small like her business houses.

''We cannot buy in bulk amount, not even produce in large volume with modern machines. So we have to compromise profit margin to sustain in the market and get a confidence of the customers,'' she says about the tricks of the trade.

Emon, who formed her company with the name BTMEE branding the products as Emon, complained about not getting credits required to expand the businesses to grab wider markets.

BTMEE has now more than 100 different kinds of spices--some of Emon's own innovation could not be marketed due to making certification quite expensive for small entrepreneurs.

Due to low profit margin, it's also not possible for her to get markets for new products that are ready as BSTI charges now more than double for each of Emon's innovations.

Though Mahmuda Sultana Emon continued her effort to sustain with slow expansion, it is not possible by other women entrepreneurs as their businesses are mostly new. But, the last SME fair brought more than 60 per cent of participants as women who displayed wide ranges of products. While reviewing information on the participants, the FE writer found majority of women entrepreneurs having started business five to 10 years ago. Women-led enterprises' products were dominated with items related to women's household works. These include herbal, spices, jewelry, boutique, mattress, Nakshikatha, block clothes. But a few women were also there in plastic-product manufacturing, hologram, interior, printing items

Nazneen Ahmed, Chief Economist, UNDP, notes that credit facility, to some extent, has now been made available for women and a few of them are also getting those. ''Inadequate credit support is obviously a barrier for women in graduation''.

Dr Nazneen says credit service is now needed to expand in terms of amount and places as demand for loan is created in district, urban, cluster and village levels.

''Women are now getting loans of Tk 2.0 to 3.0 million. But they need to take risk and seek credits of larger amounts,'' she adds.

A gender specialist, Dr Nazneen also emphasises market tricks learning to compete with other big industries of the same categories.

She reiterates the role of the government in providing continued and timely policy supports like increase in collateral loan limits, creating scope for new markets, capacity building to compete with other products of respective sectors etc.

Dr Nazneen mentions that signature products and branding- related training are also necessary as innovation, value addition in products are also important elements to develop for filling up the gap remaining in women's traditional working skills to run successful business.

The government made a move to develop area-specific products of any districts, zones or culture with the concept ' One district, one product'. SME Foundation is also trying to develop entrepreneurs in clusters providing loan facilities in clusters.

But Dr Nazneen believes that the women entrepreneurs are now going through a transition and will certainly grow with the time passing.