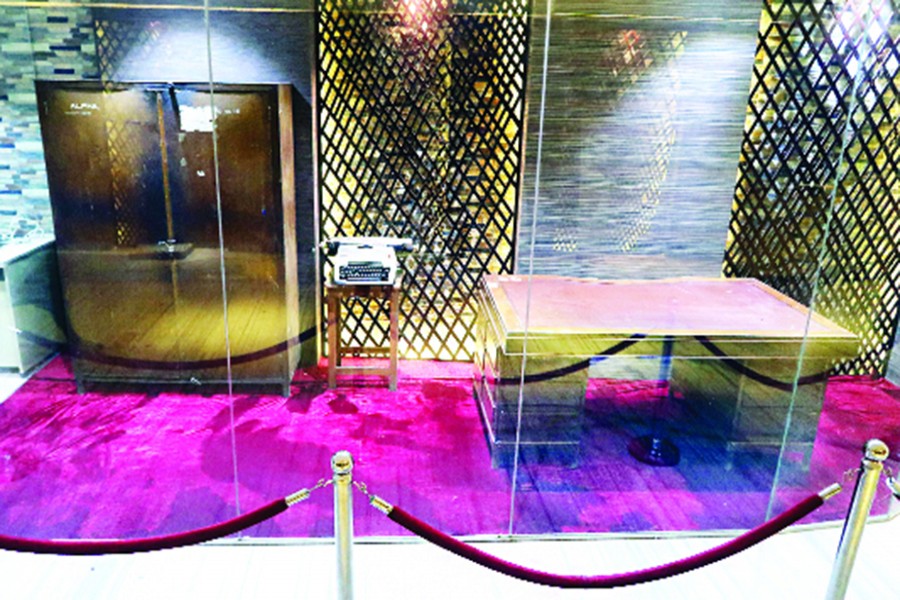 The table, the typewriter and the almirah seen in picture were used by Father of the Nation Bangabandhu Sheikh Mujibur Rahman while he worked as the head of business promotion at the Alpha Insurance Company at the Bangabandhu Avenue Office. These articles are being preserved at the Head Office of the Sadharan Bima Corporation at Dilkusha Commercial Area in Dhaka.

During the 1960 martial law across the country (then East Pakistan), Bangabandhu Sheikh Mujibur Rahman joined the Alpha Insurance Company. The Father of the Nation joined the insurance company as the chief of business promotion. He also received his first salary from the insurer in April 1960.

Unearthing the true history of how and when he joined the company was not an easy task. There were very hard efforts made by some close relatives and well-wishers to unearth it. Mr NI Khan, the curator of Bangabandhu Museum, had played a significant role in this. Mr Sheikh Kabir Hossain, currently president of Bangladesh Insurance Association, also played an important role in this regard. The government's law enforcing agencies had a record on the joining date.

After return from London, Bangabandhu made Mr Shafat Ahmed actuary, the first controller of the department of insurance. He had later laid the founding stone of the insurance sector under the guidance of Bangabandhu. During 1980s, Mr Shafat later established the Delta Life Insurance Company in the private sector. He is the pioneer of micro insurance in the country. He is no more with us. The Insurance Development and Regulatory Authority (IDRA), however, has selected him for awarding the first gold medal posthumous today at the Bangabandhu International Conference Centre in the city.

People having knowledge of the sector said the decision of the Father of the Nation to pick Mr Shafat for this important job was very brilliant as the insurance personality later contributed immensely to the country's insurance sector.

The reform in the sector after the Independence was carried out by Mr Shafat under the leadership of Bangabandhu. It was easy for Mr Shafat to carry out the reform as he had thorough knowledge of the sector.

Relatives said Bangabandhu's joining the Alpha Insurance was merely a political strategy as politics was almost restricted in the country that time.

"Bangabandhu used to meet with the fellow political activists and give different political messages to the people sitting in the Alpha office," said Sheikh Kabir Hossain recently at his Panthapath office in the city. He also said: "Even I met him several times at the office."

However, daughter of Bangabandhu and incumbent Prime Minister Sheikh Hasina was also influenced by what her father did. She during her first term in power from 1996 to 2001 gave licences for operation of insurance business in the private sector. The insurance firms are now mature enough and have been making an important contribution to insurance penetration and gross domestic product growth (GDP).

She also appointed another actuary Mr Shefaque Ahmed the first head of the IDRA in 2011. Mr Ahmed had served as IDRA chairman for two consecutive terms.