For the first time in the history of Bangladesh, 1st of March 2020 is going to be celebrated as the 'National Insurance Day' in the country in a befitting manner. This celebration will definitely be a stimulant for the insurance sector as a whole since it is a national observance mandated by the Government of Bangladesh.

Through this celebration, the government is paying heed to this underdeveloped segment of the financial market and this will be acclaimed by our international development partners. Every year the celebration of the National Insurance Day in the country will pave the way not only for promoting insurance as a vehicle for financial inclusion in the remote areas of the country, but also for motivating 78 insurers to proactively serve their customers with the need-based insurance products.

It is to be hoped as well that this festive observance would result in upholding the social as well as economic benefit of insurance to our people, which would both impact the penetration rate, and help attain the United Nations' Sustainable Development Goal 8 (Promote sustained, inclusive and sustainable economic growth, full and productive employment and decent work for all).

In this regard, the Government of People's Republic of Bangladesh issued a circular on 15 January 2020 for celebrating 1st March as the National Insurance Day throughout the country with a view to commemorating the joining day of Bangabondhu Sheikh Mujibur Rahman in an insurance company in his noble career. History suggests that the father of the nation had become a part of the insurance family on 1st of March 1960 by joining in the then Alpha Insurance Co. Limited, which has made the sector a blessed one.

The GDP contribution of the insurance sector to the country's GDP in the year 2017 was very nominal i.e. 0.56% (Ref: IDRA Annual Report 2017-2018) because the insurance growth rate has not been significant since our independence in 1971, in comparison with other counterparts financial markets i.e. banking sector. As a result, our insurance market has been an under-performing one in the South Asia region.

Geographically Bangladesh is located in the South Asia where insurance sector is emerging due to sustainable development and high density of population in the 'SAARC' region. In the recent past, the insurance sector has experienced a rapid growth in Sri Lanka and India. In India there is a significant insurance penetration rate i.e. 3.69% despite the fact that their growth has largely been aided by agriculture and health insurance. But, their highest premium generating portfolio is motor insurance.

Insurance being a financial product required soft skills in order for production, distribution and marketing of this product whereas the current level of technical know-how of our insurance employees in Bangladesh, is far below the required label.

So, human capital investment can be the best way for improving the existing and future professionals who are expected to contribute enormously for the successful operation of the insurance market.

Human capital management varies from human resource management, which is defined as "a strategic approach to acquiring, developing, managing, motivating and gaining the commitment of the organization's key resource -the people who work in and for it" (Armstrong, 1997).

Once the professionals are groomed up, they would provide the insurance policyholders with tailor-made insurance products. This would, for sure, improve the overall image of the sector, and eventually pave the way for a stable and healthy economy. 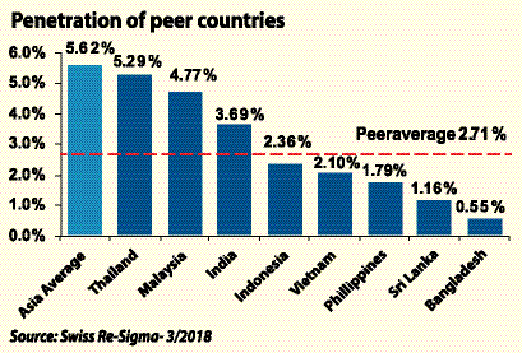 This also will help Bangladesh meet the requirement of World Bank's Human Asset Index in its way to be graded as a developing country in the days to come.

The findings of a survey conducted by Bangladesh Institute of Bank Management do indicate that number of employees in the banking sector declined to 81,245 in 2017 from 90,265 in 2016. Bankers spend BDT 0.25 out of BDT 100 for human capital development though an average expenditure for human resource development across the world is 2-3 per cent.

There is no denying the fact that investment in skills development of workforce can be added advantage for insurers though handling human capital is a huge challenge. In this regard Lloyd's risk index has also identified "a shortage of talent and skills" is the second most critical risk in 2011 that businesses face globally (Lloyd's 2011).

The implementation of modern techniques of human resources management is hardly evident in Bangladesh, a south Asian country where the basics of HR Management is yet to set into practice even in most of the listed companies. Nevertheless; there are some exceptions to this realism.

Talking about the potentials of our overall economy, the Goldman Sachs Group, Inc., an American multinational investment bank has listed our country in the Next Eleven emerging market middle income economies in the 21st century. Bangladesh, Egypt, Indonesia, Iran, Mexico, Nigeria, Pakistan, the Philippines, South Korea, Turkey and Vietnam are the proud members of the Next Eleven (or N-11).

We are very much optimistic about the future of the insurance industry as the World Bank has undertaken a project costing of 80 million US Dollar to develop the insurance sector of Bangladesh in collaboration with the Insurance Development and Regulatory Authority (IDRA).

In the last decade or so, the government has adopted some corrective measures, for example, passing of two insurance related acts of parliament. IDRA ACT 2010 and INSURANCE ACT 2010., Those acts are the milestones for the sector. Insurance Act 2010 has repealed and modernized the long-prevailing Insurance Act 1938, which used to define the market practices in Bangladesh. By the way, the introduction of the different rules and regulations by the Insurance Development & Regulatory Authority (IDRA) have recently been vibrating the sector with positive exposures.

Last but not the least, the celebration of insurance day nationwide on 1st of March 2020 would definitely give a moral boost to the existing insurance employees of the market. This would also help create a sense of hope among them about the future of the sector.

As an insurance professional, I myself really feel honored to have seen that the insurance day is being celebrated nationwide by many private sector organizations, different government agencies at thana/district level, non-governmental organizations and the civil society, among others.

In such a vivid and joyous situation, we cannot but take an oath, in the same tone of the slogan of the National Insurance Day, for devoting our career goals, professional knowhow, experiences, and skills to the advancement of the insurance sector of our beloved motherland, Bangladesh.

(Mr. Md Khaled Mamun, ACII (UK), is associated with the Chartered Insurance Institute of the United Kingdom. He is