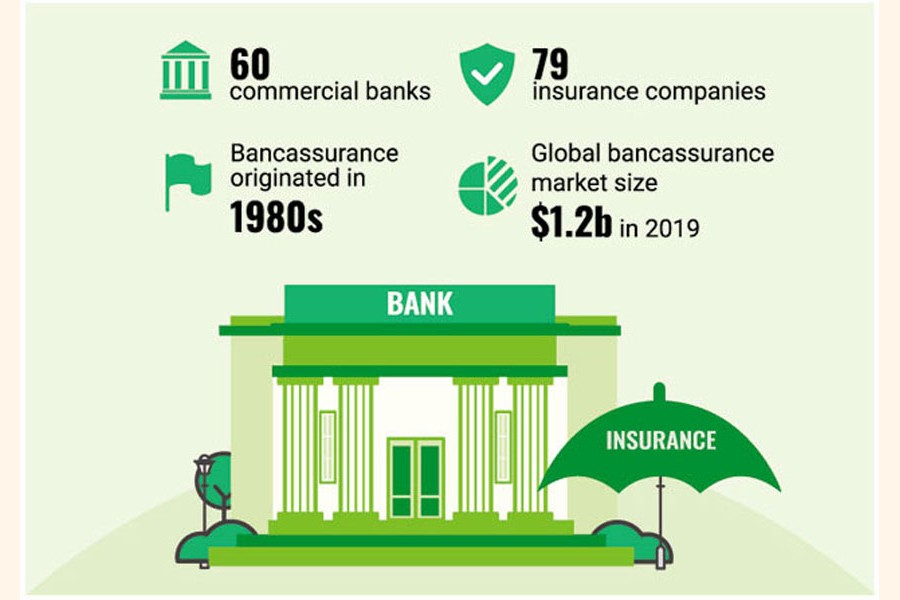 Bancassurance, a bank and insurance partnership business model is expected to be launched this year as both the banking and insurance regulators have been working on it.

It is expected that it will provide a new avenue for them to boost commission-based income up.

Currently, bancassurance is not in operation in the country for banks and insurance companies as the existing laws and regulations do not allow the same. Previously, the insurance regulator wanted to launch it but the country's central bank did not show interest in it.

However, this time the banking regulator, Bangladesh Bank and the insurance regulator, Insurance Development and Regulatory Authority (IDRA), have joined their hands to devise means to launch bancassurance in the country.

This model gives banks, with their nationwide network of branches and a large number of customers and workforce, a better platform to sell the insurance policies than the insurance companies themselves. Local people have much more trust in banks than insurers.

These banks have a total number of 10734 branches as of December 2020. Most of it has an online facility. Banking system has more than 1.3 million active deposit accounts.

With the introduction of bancassurance, there will be higher insurance penetration. It is argued that it will bring many dramatic changes in the insurance industry. They are: (a) The business model will enhance financial inclusion by insuring the uninsured people; (b) Such partnership will provide insurance services under banking umbrella; (c) It will ensure non-traditional revenues for banks.

Bancassurance originated in Europe in the 1980s, it has now become popular all over the world. The global bancassurance market reached around USD. 1.2 billion in 2019.

Europe has the biggest market of the model. it represents over 65 per cent of the premium income in life Insurance in Spain, 60 per cent in France, 50 per cent in Belgium and Italy each.

Emerging markets such as China and India are exhibiting high growth potential for the bancassurance market. Bancassurance is available in SAARC countries: Bhutan, India, Nepal, Sri Lanka and Pakistan.

But Bangladesh which has been growing faster than its peer nations of the region is lagging behind in terms of financial security through insurance.

It has both risk and opportunities in Bangladesh market. A popular analysis technique -- SWOT [Strength, Weakness, Opportunities and Threats] was done to evaluate its prospects and potential in the country.

Strengths: (a) The size of the country's population is 170 million. Some 60 banks with a nationwide network of branches in both urban and rural areas. They can facilitate the insurance business; (b) People's purchasing power is on the rise; (c) Banks' have much trust than insurance firms; (d) Both rural and urban economies are growing; (e) The rate of literacy is growing in rural areas; (f) The financial literacy is growing; (g) Almost all banks are online; and (h) Leading banks have MFS licenses and reach the target peoples without a bank account.

Weaknesses: (a) Common people have negative attitude towards insurance sector; (b) Insurance sector has a lack of proper people to sell their products as most development officers work for a number of insurers in the same area; (c) Suspicion over quick claim settlements by insurers; (d) Some cultural differences among banks and insurers that may arise for the nature of products, strategies and revenue recognition; (e) The unbanked population still high; (f) Corporate culture is not homogeneous; (g) No institutional training facility about bancassurance is currently available; and (h) Limited number of insurance products;

Opportunities: (a) Insurance penetration remained one of the poorest in the world. Bangladesh has less than 1.0 per cent penetration; (b) People have trust on the banking system; (c) Banks have information about customers. they can use it to sell insurance products; (d) Through banking networks, insurance products can reach previously unserved areas; (e) Corporate and salaried customers can be targeted for specific products; (f) Relatives of expatriates can be targeted for business; (g) Rural agricultural farms are growing; and (h) It can create a new opportunity of business for banks.

Risks: (a) Image crisis of the insurance sector; (b) Many insurance firms are not financially sound for higher management expenditure; (c) Lack of actuarial tables and detailed analysis on the population. Such deficiency leads to higher premium rates. Besides, 50-plus peoples are not targeted for insurance; (d) Lack of automated insurance sector; (e) Banks will have to be prepared for possible disturbance to client relations because of insurance claims; and (f) Conflict of interest between the other products of bank and insurance policies.

However, a high-powered committee headed by the general manager of the Banking Regulation and policy Department of Bangladesh Bank is now working on it. Committee consisting of all stakeholders. They have already met several times.

It is expected that both the insurance and banking regulators may finalise rules and regulation pertaining to it shortly. And it is expected that within this year the new business model will take place in the country's financial market.