Poor contribution of ins. to GDP 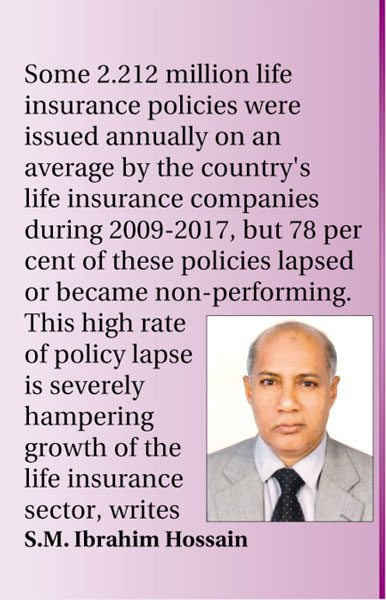 The National Insurance Policy-2014 prepared by the insurance regulator IDRA had a target to raise its contribution to GDP to 4.0 per cent by 2021. This remained still far away from reality.

Actually there are many challenges to meet the target or goals. One of the main reasons is poor density of insurance in the country. This is a country of nearly 170 million people, but only 10 per cent have life insurance policies. And of those who have insurance plans, a large number see their policies lapse.

Some 2.212 million life insurance policies were issued annually on an average by the country's life insurance companies during 2009-2017, but 78 per cent of these policies lapsed or became non-performing. This high rate of policy lapse is severely hampering growth of the life insurance sector.

This indicates that we need to closely monitor the coverage of insurance and widen the scope of non-life insurance. According to the Road Transport Act 2018, the Liability Insurance of Motor Vehicles is not valid any more which will lead to a further fall in non-life insurance business.

To meet the challenges IDRA suggested deploying agents having SSC as minimum qualification and mandatory 72 hours' training. Seminars are being organised at divisional and district levels under a World Bank-funded project, namely BISDP, to raise public awareness. The insurance sector is being brought under full automation mandated by the WB-funded project.

Besides, steps are being taken to include insurance contents in the textbooks of secondary and higher secondary education.

IDRA has taken steps for speedy settlement of claims. Steps are being taken to implement the National Insurance Policy 2014. If all these steps are implemented, many problems in the insurance sector will be solved which may boost the people's confidence on the industry.

Policy lapse is the major issue because it is like cutting the young saplings right after planting them. Some 78 per cent lapse means the same amount of business is lost after procurement.

Government has a vision to turn Bangladesh into a developed country by 2041. For this, insurance companies need to be prepared. The contribution of insurance to the GDP needs to be raised to a large extent. The contribution can also be raised by introducing corporate agents, bancassurance and the suitable micro insurance (micro health, micro credit insurance).

New insurance products need to be introduced after removing the existing problems. Complete automation is required and fast claim settlement is also important. All stakeholders need to come together to take the sector forward in a bid to build a rich and developed Bangladesh.

at the Bangladesh Insurance Academy.