Bangabandhu was the Druid in our lives 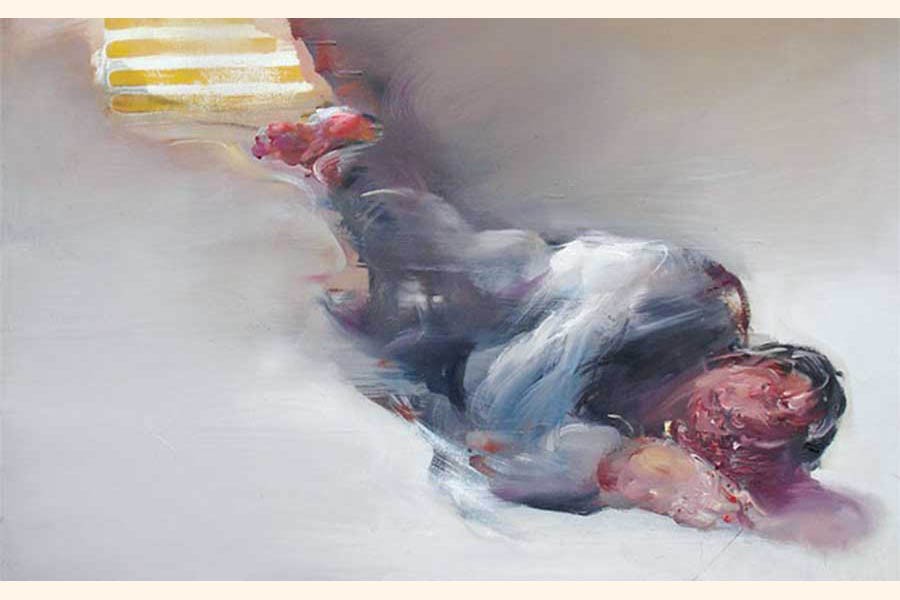 In the pre-dawn hours of 15 August 1975, sinister darkness descended on Bangladesh. Conspiracy felled the Father of the Nation, Bangabandhu Sheikh Mujibur Rahman, and nearly his entire family. Bloody treason, in Shakespearean terms, reigned supreme in the land. It was the end of a chapter in the history of this country. More ominously, it was the light going out of our lives when Bangabandhu was shot down and collapsed on the stairs of his home. He lay there, lifeless. It was Bangladesh laid low as the murderers went from room to room gunning down his spouse, children, daughters-in-law and brother. When it was all over, the uniformed assassins gleefully told themselves, 'All are finished.'

Bangabandhu's corpse and those of the other members of his family lay in that blood-drenched home, the very place which had become symbolic of national history over the years, as the conspirators put Bangladesh into a stranglehold. Forty five years on, it is still a shock retelling ourselves of the horror we were all plunged into on the day. For close to five hours, Bangabandhu lay dead at 32 Dhanmondi and yet no effort was made by the leading lights of the military or other security forces to mount a resistance to the killers and their political accomplices. All these men, in the service of the republic and till the other day loyal to the Father of the Nation, in obsequious manner trooped down to the radio station to profess allegiance to the usurper installed in power. Not one of them resisted; not one of them questioned the men behind the calamity.

In killing Bangabandhu, the assassin majors and colonels and their political patrons imagined they were wiping out the nation's history. They went forth to inform the country and the world that Bangladesh had changed course. Suddenly, the slogan Joi Bangla was banished and in its place came the spurious 'Bangladesh Zindabad'. Secularism was on the run and patently communal ideas had begun to vitiate the atmosphere. Bangladesh Betar mutated into Radio Bangladesh. The usurper proclaimed the assassins as 'children of the sun'. Only, the sun was a bloodstained one on the day.

When you recall Bangabandhu Sheikh Mujibur Rahman's place in our national life, you cannot but reflect on the place the month of August has in his long political struggle. In August 1946, as Calcutta burned through the riots pitting Muslims and Hindus against one another in the aftermath of Direct Action Day, a young Sheikh Mujibur Rahman plunged into the task of containing the violence in the city. He was a dedicated worker of the All India Muslim League and yet he reached out to both communities in his endeavour to put out the fires and stanch the blood that was destroying lives.

Move on to another August, that of 1947. Pakistan having come into existence, Mujib moved from Calcutta to Dhaka in the belief that the new political dispensation would redound to the benefit of Bengali Muslims. His respect for Mohammad Ali Jinnah was unquestioned and yet within months he would begin to have second thoughts about the Pakistan idea. It was the issue of language that exercised his mind in early 1948. Add to that his solidarity with the menials of Dhaka University who had gone on strike to demand better working conditions. The young Mujib was surely aware of the ramifications of his support for the menials, but timidity was no part of his nature. It was this courage of conviction that would become increasingly more pronounced as he pursued a political career on the national stage. In 1948, Dhaka University would show him the door. Ironically, twenty three years later, as Bangladesh's leader, he would be its chancellor.

In August 1968, the proceedings of the Agartala Conspiracy Case galvanized the two wings of Pakistan, for it was Sheikh Mujibur Rahman who, as accused number one, was on trial. The case had commenced in mid-June of the year and by August it had turned into the principal focus of discussion in both East and West Pakistan. In court, Mujib never lost his equanimity. Courage and self-confidence defined him even as the Ayub Khan dispensation looked forward to a conviction that would either have the leader of the Awami League walk the gallows or spend the rest of his life in prison. It was a supremely confident Sheikh Mujibur Rahman who loudly proclaimed in court, 'Anyone who wishes to live in Bangladesh will have to speak to Sheikh Mujibur Rahman.' Here he was on trial for his life and yet it was the future that was shaping up in his imagination.

Life for Bangabandhu had always been lived at the precipice of danger. He was one politician in pre-1971 Pakistan for whom imprisonment was to turn into a casual event. He often quipped that prison was his second home. In August 1971, his incarceration in Pakistan at the height of the War of Liberation in Bangladesh was verily an experience neither he nor many in the country expected him to emerge free of. The Pakistani ruling circles, not willing to commit the mistake of keeping him in Dhaka and subjecting him to an open trial, were shrewd enough to fly him to Mianwali jail and place him on trial in camera before a military tribunal. The goal was obvious: it was time for Sheikh Mujibur Rahman to be disposed of. Sentenced to death in November of the year, it was only a matter of time before he would meet his end.

And yet circumstances stood transformed, enough for Bangabandhu to be freed by the government of a rump Pakistan and sent out of the country. Today, forty five years after his assassination in Bangladesh, the very country he had led to freedom, it is pertinent to ask if his enemies --- within and without --- were not busy planning his elimination from the day he came back home. There were leftwing extremists creating trouble in the border regions; local collaborators of the defeated Pakistan army lurked in the bushes; false propaganda in sections of the media (remember the Bashonti scandal?) sought to undermine the government; the Ford administration in the US, angry with Bangabandhu over Dhaka's jute trade with Havana, called back a shipload of emergency food for Bangladesh; rising prices, brought on by the oil crisis in the Middle East, had created famine conditions in the country; and worsening it all was a series of devastating floods ravaging large parts of Bangladesh.

Bangabandhu's was an embattled government. Even so, it fought bravely on. Today, there are all the grounds for criticism where the fourth amendment to the constitution, adopted in January 1975, is concerned. But let the economic realities not be ignored. Reports emerging in post-August 1975 circumstances pointed to significant improvements in agriculture between January and August 1975. One cannot ignore either the fact that the Baksal concept needs to be studied in a broader academic perspective. Within that study must come Bangabandhu's concept of a decentralisation of power, through segmenting the country into sixty districts, each with a governor in charge, the better to promote a people-oriented administration that would signal a break with the entrenched bureaucracy that had been the norm since British colonial times.

The violent coup of 15 August put paid to all of that. It did much more. It struck at the fundamental structure of the Bengali state and set in motion a train of events that would push the country into military and quasi-military rule. That was the nature of the darkness the nation was plunged into on the day Bangabandhu died. The darkness would not lift for twenty one years. It was a time when the nation's self-esteem came under relentless assault through the imposition of the indemnity ordinance blocking the trial of Bangabandhu's assassins; through sending a good number of the killers abroad as diplomats; through permitting some of the other assassins to cobble together a political party and take part in elections.

History, though, cannot ever be tampered with. That is the lesson that has come down to us through the generations and because it has, Bangabandhu's place in history remains assured and secure. He walked tall in the councils of the world, informing fellow leaders of the ethos of his nation. Fidel Castro was wonderfully surprised by the fact that Bangladesh's people had freed their country on the strength of his leadership even as he languished in prison. Marshal Tito respected him and so did Leonid Brezhnev and Alexei Kosygin. Harold Wilson and Edward Heath found his company pleasant. Anwar Sadat looked upon him as a brother. Bangabandhu asked Indira Gandhi, who honoured him immeasurably, when her soldiers would leave Bangladesh. She made sure they left by March 1972. He would not travel to Lahore for the Islamic summit in February 1974 unless Pakistan acknowledged Bangladesh as an independent nation. Zulfikar Ali Bhutto obliged. It was a globally acclaimed Sheikh Mujibur Rahman who journeyed to Lahore. For Bengalis, it was a moment of supreme pride when Bangabandhu stood in the cavernous hall of the United Nations General Assembly and spoke in Bangla before the world.

Bangabandhu Sheikh Mujibur Rahman was one of us. People of his generation respected him as Sheikh Shaheb. The struggling masses endearingly called him Amago Mozibor (our Mujibur). His laughter came from somewhere deep in his soul; his sense of humour was a pronounced affair. He admired Bertrand Russell. On the night before he was assassinated, it is said he had been reading Shaw's 'Man and Superman.' Ayub Khan and Yahya Khan tormented him, but they could not intimidate him into silence. When Tikka Khan saluted him in Lahore in February 1974, Bangabandhu's sarcasm was evident. 'Hello, Tikka', he said and moved on. When firmness was called for, he did not flinch from displaying it. He knew people in his party were hoarding relief goods and food and duly excoriated them in public. He was blunt in asking bureaucrats to contribute to the national cause by joining peasants and workers, thereby identifying with them.

Bangabandhu pledged to repay the love of his people through sacrificing his life in the interest of their welfare. In the end, his promise turned out to be a self-fulfilling prophecy. On the day Salvador Allende was murdered in Santiago in September 1973, Bangabandhu sadly remarked, 'They will now come after me.' He went home early from his Ganobhaban office.

Eleven months after the carnage in Chile, they came after the Liberator of Bangladesh. They killed him, unaware that the idea he symbolised would not and could not die. Bangabandhu was the embodiment of liberty, of all the beauty which flows from politics resting on a struggle for an attainment of the popular weal.

This morning, as on every morning, our heads are bowed in obeisance to Bangabandhu Sheikh Mujibur Rahman. He was our very own . . . and we are his. Here was the Druid in our lives, the Colossus in whose brilliance we shone across the globe.

On National Mourning Day, the lesson comes home to us: Sheikh Mujibur Rahman remains our history, our claim on heritage, our hold on the future.

Syed Badrul Ahsan is a writer and senior journalist.