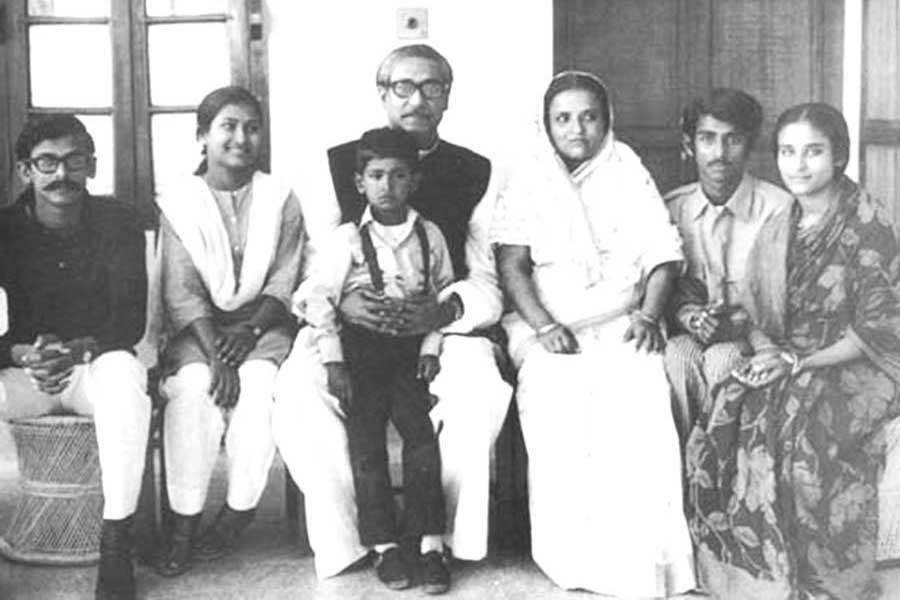 August 15 has become a national mourning day of Bangladesh and it will remain so forever. This day will be solemnly observed across the country. Forty five years ago, a young group of military personnel of newly independent Bangladesh brutally killed Sheikh Mujibur Rahman, the Founding Father of the country, and all but two members of his family who remain the undying embers of his sprit.

A land that just went through the destructive rampage of genocide and many other destructions due to a nine-month liberation war entered an era of hatyar rajnity or politics of violence. This group of Pakistani trained army officers destroyed the living Sheikh Mujibur Rahman, but, as described by eminent historian Shalauddin Ahmed, Bangabandhu "remains the rare instance of a statesman in history in whose name, and in whose physical absence, a nation fought its way to freedom. The surrender of Pakistan in Bangladesh in 1971 was indeed the culmination of Mujib's long struggle for the emancipation of his people. They killed him, with most of his family members, on August 15, 1975. Bangabandhu Sheikh Mujibur Rahman remains in death, as he was in a lifetime, Bangladesh's foremost political symbol." A young group of Pakistani trained army officers succeeded in introducing the hayter rajnity and made August 15 a landmark day of mourning in Bangladesh for generations to come.

In the human history killings of men in power for the sake of grabbing political power have happened repeatedly. This type of killings is considered differently from regular murders that take place in society. However, selective killing of the man of power - King and Head of State - is considered as 'assassination'. The most important aspect of assassination is its secrecy - the killer wants to stay unknown. Around 1600, Shakespeare first used the word 'assassination' in Macbeth as a synonym of the regular word 'murder'. But later it has been used for political killing only and different from regular 'murder.' There emerged another method in the modern era, called coup-d'etat, sometimes simply 'coup' to topple a government. Both have the same intention - removal of a person from power but modus operandi is different. Moreover, in the case of the assassination, the killers do not become public until the criminal justice system finds the perpetrators whereas a coup or a counter-coup is always an open effort. Thus, what happened in Bangladesh on 15 August of 1975 was reported as a coup and was unparalleled in terms of destruction, severity, and scope.

History reveals that coup spawns counter-coups. In the case of Bangladesh, the killing of the Founder Father was followed by more killings. The group behind the coup, first believed that by eliminating Bangabandhu they would wreck Bangladesh and that would be the end of Bangladesh. In the second move, they killed Sheikh Mujib's four life-long political comrades in Dhaka Jail on November 03, 1975. In the absence of Bangabandhu, these four leaders successfully steered the liberation war into the final stage of independent Bangladesh. After the killings of these four associates of Sheikh Mujib, another Army General, Khaled Mosharraf, was also killed on November 07, 1975. Creating confusion is quite common in the history of military coups. The initial actors of a coup over time go to oblivion and someone emerges as the final beneficiary. In the case of Bangladesh, the key beneficiaries of the killing of Bangabandhu did not pay attention to one major historical reality that thousands of Bengalis took up arms and died even when Mujib was not present and so by eliminating him they only reinforced the perpetuation of his spirit and vision. Bangabandhu is a symbol of hope and aspiration - a compendium of life, liberty, equality, and social justice. Bangladesh was a dream, an ideal construct of Bangabandhu and it was erected even when he was absent during the nine-month liberation war period. One can eliminate a dreamer but not the dream.

How could those perpetrators and their supporters assume that by eliminating Sheikh Mujibur Rahman from this world they could destroy his dream? Sheikh Mujibur Rahman had already been deeply embedded in Bengali ethos except for a handful of distracters his mega dream of independence remains a bacon to guide the country to scale luminous heights. Those perpetrators and the supporters did not learn from history that dreams are indestructible. The Founding Father who taught the Bengalis to dream is also indestructible.

For a peaceful living, people need to be vigilant. Justice has a unique way to prevail. A couple of months ago one of the perpetrators of Mujib killing came from the blue and was caught. For a long time, many beneficiaries of 15 August tried to twist the truth by using different ploys but these withered away like wilted leaves of a fallen tree. Moreover, the massacre violated the founding Kantian principle of a civilized society - the rule of law.

The year 2020 provides a life-time opportunity for the citizens of Bangladesh to celebrate the 100th birthday of the Founding Father and also like every year the people mournfully observes his death too with a greater sense of loss. For those who are part of the current administration, the best tributes that they can pay to Bangabandhu is by bringing to fruition his dream of economic emancipation that leaves no one behind.