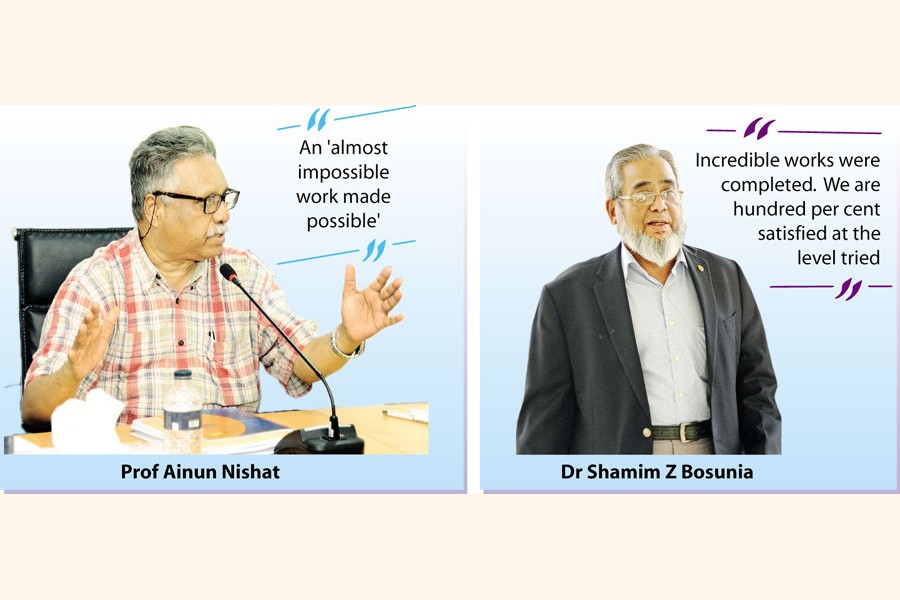 Multinational consultancy stakes are embodied in the Padma Multipurpose Bridge that now sparkles over the devastating waves of one of world's most turbulent rivers. The PMB project has taken different kinds of consultancy supports from international firms and experts of numerous countries at various stages in the implementation. Panel of Experts (PoEs) was among them which comprises six national experts and four international. A melancholic note will, however, be ringing softly when celebrations will be set off too soon marking the bridge's inauguration. Three pioneers will be conspicuous by their missing. They are the first chairman of the PoEs, Professor Jamilur Reza Chowdhury, and Professor Dr AMM Shafiullah and Professor Dr Alamgir Mujibul Hoque.

The three passed away when the project neared almost its end--amid the high waves of pandemic coronavirus. Now Professor Dr Shamim Z Bosunia is the chairman of PoE. Professor Ainun Nishat has been attached with the panel from the beginning as an expert on river-training works.

All on the PoEs used to rush to the construction sites whenever any technical problem arose and guided the project by consulting one another as well as with international members, virtually or physically, to find the best solutions to the problems. Dr Bosunia and Dr Ainun Nishat shared their experiences with The Financial Express on the occasion of inauguration of the Padma Bridge.

Asked about the standard of the country's longest bridge built by taming the once-unmanageable river, they both expressed their satisfaction in the highest degree. Prof Bosunia terms the work 'incredible'. The project was uncompromising to the level of following international standards at all stages. Quality control was very strict in the project.

"Incredible works were completed. We are hundred-percent satisfied at the level tried," says Dr Bosunia, however, focusing on the need of proper maintenance of the Padma Bridge for its lasting through the bridge lifespan of 100 years.

He cited as an example another big bridge built in the British era over the same river, saying that the Hardinge Bridge is still in operation after 100 years due to its maintenance.

According to him, experiences in the Jamuna Bridge construction worked in the success of the Padma Bridge. 'We have an advantage of experience of working in Jamuna-like alluvial river. Foreign experts might have theoretical knowledge but they have limited practical knowledge as Padma-, Jamuna-like alluvial rivers are very few in the world," he clears.

The professor of engineering of BUET says the Padma river is stronger than any other rivers, mightier than other rivers in the world. The river-training model proposed by them in the case of Padma was used in the Jamuna Bridge successfully.

Regarding the challenges in the design of both main bridge and river-training works, the PoE chairman said the checking of the design as well as materials is also done strictly. Both first chairman Dr Jamilur Reza Chowdhury and he had been in Wuhan of China several times to check the materials and equipment before shipment. Not only that, shipment of any materials could not start before the two engineers who were posted at the manufacturing sites had certified. The project has been tried to be under strict supervision, the current chair adds.

"We all tried to give our best," Dr Bosunia repeats, on an emphatic note on the engineering wonder.

Prof Ainun Nishat also claims that challenges were there for all independent international consultant, supervision and quality-control consultants engaged in the Padma Bridge project as they do not have experience in such a deep foundation as well as river- training work. No compromise in the technical and environmental quality was allowed in the project. They were also conscious about the quality work and had gone through various sorts of trial and error to finally manage the unpredictable and get the desired-level work.

Citing more examples, Dr Nishat says being it a mighty river, seasonality, current or erosion etc were all against whatever schedules were planned during the construction work.

Both Dr Bosunia and Dr Nishat, an expert on structure, and water resources and climate change respectively, claim that PoEs have played the key role in the decision-making process, too.

"There were lots of scope to compromise the standard and quality--scope to cut the cost. But did not do it as clear directives from the Prime Minister were there in this regard,'' he says to make it clear what an epical effort has gone into PMB making.

When asked about the allegation raised about corruption, on which the World Bank-led financiers had backtracked, the PoE chairman says the project was designed in a way that none can misuse funds. The contractors were also in the mental pressure of losing reputation nationally and internationally. He, however, expresses his ignorance about the land acquisition.

Regarding the criticism in keeping the provision of single rail track in the double-decker Padma Bridge, the PoE head says the project cost doubled just to include single-track rail option in it. Single track was proposed considering the existing rail facilities and future possibilities on both sides of the bridge. After nearly two decades, it is found that the new rail routes being developed in the south-western region have also single-track facility. Demand for double-track rails would not arise in the near future.

Dr Bosunia also underlines the need for controlling the plying of overloaded vehicles to keep the bridge operative for longer time and expresses his confidence that the Padma Bridge will change the fates of the people on both sides.