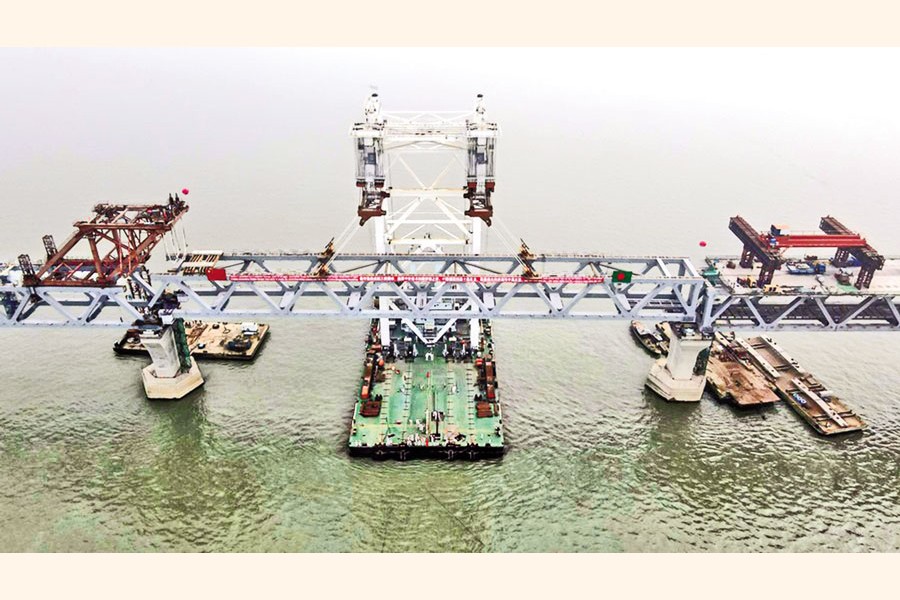 Aerial photo taken on Dec. 10, 2020 shows the last span of the Padma Bridge being installed at the construction site over the Padma river in Munshiganj — Xinhua

With the Padma Bridge opening to traffic on Saturday next, the mega structure will usher in a new era of hope and economic prosperity for the south-western districts of the country, observe business leaders in the region.

They believe the dream project will not only facilitate the existing business - ranging from agriculture to manufacture - but also create scope for new businesses, thus creating employment opportunities.

Talking to the FE, President of the Barisal Chamber of Commerce and Industry (BCCCI) Saidur Rahman Rintu said he was profoundly optimistic about the economic impact of the Padma Bridge on the region.

The economic prospects of Barisal have long been shadowed due to poor infrastructure, especially the road connectivity, he said.

Now, it is necessary to complete the construction of infrastructure related to the bridge as economic activities will gradually increase after the bridge inauguration, Mr Rintu suggested.

"We hope the government would implement the 237-kilometre four-lane road between Faridpur and Kuakata via Bhanga-Barisal-Patuakahli as soon as possible, in order to cope with the increased traffic in the coming years," he said.

The opening of the dream bridge will improve accommodation facilities too, he said, adding that a number of star hotels would be established in Barisal and Patuakhali, which in turn would facilitate tourism.

"As far as I know the feasibility study of the proposed economic zone has been completed that will create a good number of direct and indirect employment opportunities," he said. "In addition, the economic zone will create a ripple effect in the neighbourhood for which seamless connectivity is essential."

Padma Bridge opening is expected to create opportunities for new types of business alongside the traditional ones mostly based on agriculture, said Mr Rintu.

When the movement between Barisal and other parts of the country, especially the capital, gets faster, more new factories will be set up in the region, added Mr Rintu.

Currently, the economic activities in the region mostly revolve around agricultural produce, like paddy, betel leaf and fisheries.

President of Shariatpur Chamber of Commerce and Industry (SCCI) AKM Ismail Haque said the district was set to go through a massive economic transformation after the inauguration of the Padma Bridge - the mighty structure that directly connects the district to the centre of the country.

"Many renowned companies have already bought land in different parts of the district in recent years to establish industrial units," he said, adding that many of them would begin construction of factories soon after inauguration of the bridge. "Land prices have already seen a rise."

Earlier, farmers in the district didn't get reasonable prices as they had to face difficulties transporting their produce outside the district crossing the Padma River.

"We hope our farmers will get good prices for their agricultural produce, thanks to the direct connectivity with wholesale markets in the capital city," he said.

Construction of railway station and the four-lane road from Jajira end of the Padma Bridge to Shariatpur town is now going on, while a move is underway to establish an international standard airport, he said.

Indicating economic opportunities ahead, Mr Haque said, "It is needless to say that people of 21 districts in the south-western region are now waiting to go through a huge change because of this bridge."

President of the Khulna Chamber of Commerce and Industry (KCCI) Kazi Aminul Haque said the opening of the bridge would help the region create new employment opportunities.

"The Padma Bridge will of course benefit us in many ways, especially revitalising industrialisation here," he said.

The bridge will boost road connectivity between the Mongla Sea Port in the region and other parts of the country, thus creating new opportunities, he observed.

The business leader hoped that the Mongla Port would get more attention in the coming years, leaving a positive impact on the local businesses.

Khulna will now be a suitable place for almost all kinds of manufacturing business as its connectivity is set to increase significantly, he said.

Currently, there are a good number of agro processing industries operating in the region.

"Time and cost will be lowered for two-way travel between Khulna and other parts of the country including the capital, encouraging local businesses to expand," added Mr Haque.

Former president of the Jhalakathi Chamber of Commerce & Industry Mahabub Hossain said, "After inauguration of the Padma Bridge, people of my district will be able to travel to Dhaka and other parts of the country 24/7 - this was not possible before."

Earlier, it wasn't financially favourable for businesses to manufacture products in the district due to excessive transportation costs, he said.

Mr Hossain hoped that many new investments would come after the opening of the bridge.

Meanwhile, former president of the Madaripur Chamber of Commerce & Industry Babul Chandra Das said, "We have been waiting for the bridge for a long time and finally the moment has come. So it's our time to celebrate."

Mentioning the investment scenario of the district, he said many small and medium enterprises (SMEs) could not make their businesses profitable due to higher transportation cost.

"Now, as the bridge is set to open, small entities are finally eyeing good business and planning to scale up their respective ventures," he said.

Sikandar Liakat Hossain, president of the Bagerhat Chamber of Commerce & Industry, told the FE that the fisheries sector of his district would benefit the most in terms of transporting their produce to Dhaka and other districts.

It used to take 10-14 hours or sometimes more to reach the capital with the agro produce from the district, he said, adding that the time would come down to almost half after the inauguration of the bridge.

Goods-laden trucks suffered a great deal of hassle crossing the Padma River via ferry, he said.

Now, the bridge will save both time and money for the businesses and make agro produce, like vegetables and fish, cheaper in kitchen markets of Dhaka and other big cities.

In the meantime, Faridpur Women Chamber of Commerce and Industry President Selina Mahbub said it was quite difficult for the entrepreneurs, especially the women entrepreneurs engaged in the cottage industry, to sell their products in big cities like Dhaka and Chattogram.

"Now we are excited to get better market access and will be able to attend different trade fairs which are mainly concentrated in Dhaka," she said.