Padma Bridge . . . leap of faith across the waters 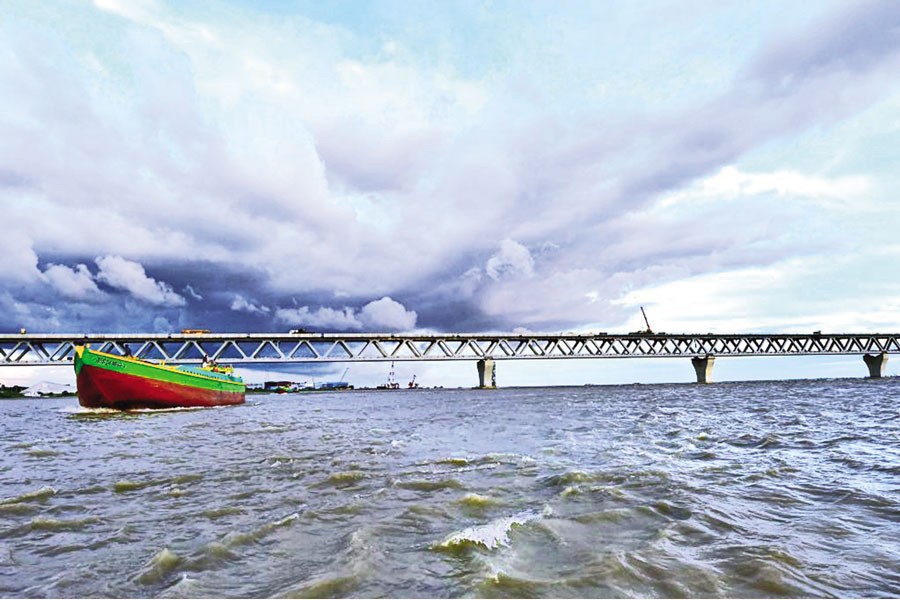 Photo taken on Sept. 12, 2021 shows a view of Padma Multipurpose Bridge Project under construction in Munshiganj on the outskirts of Dhaka, Bangladesh — Xinhua Photo

There is a literary, indeed a near religious quality which has come to be attached to the River Padma across the generations. It has been and is part of the folklore which has underscored Bangladesh's cultural traditions.

The turbulence of the waves, the songs of boatmen as they go home, the poet looking out at the far expanse on the other bank of the river, local traders doing brisk business beside the waters of the river --- these are tales we have heard and lived through.

The mighty Padma --- that is how we in Bangladesh think of the sheer power it symbolises --- is that river that has seemingly no end. That other bank, the one away from where we are, is but another land beyond reach, beyond comprehension.

A boat will take hours, perhaps the better part of a day, to carry you from one bank of it to the other. A ferry crossing gives you an idea of the enormity of power, of depth, of the riotous beauty that is the Padma.

Over the centuries, the Padma has been evocative of our collective soul in as much as it has been symbolic of fear. The light of the moon playing on its gleaming waters has caused romance to well up in the hearts of the young, has had the elderly feel in its waves the spirituality which has redefined their perspectives on life.

In days gone by, dreams of journeying across the river were the stuff of poetry. There, in that distance --- distance from where you stood feeling the breeze, looking out to that near-fairyland on the other bank --- was a world you imagined sailing to.

Our childhood and adolescence were governed by the stark, often fearsome and forbidding beauty of the Padma. In our ageing, in these twilight days of life, that old magic of the Padma, the epic quality of its waves and its sounds and its power to destroy villages, to take down homes in flood-driven fury is the story we have not forgotten.

Today, as that mighty bridge over the Padma is inaugurated, it is a new dream taking hold of us. Translate this dream into your specifications and you will arrive at a renewed understanding of the capacity of government to do good, of the engineering arising out of human ingenuity to inform us that the Padma, the river we have always been fascinated by, is now a metaphor for human endeavour. Those six-plus kilometres between where you stand on this bank and where your friend waits on that bank have now been bridged, each to each.

The Padma Bridge links us all to the south-western region of the country and the other way around. It quickens the pace of the journeys we mean to undertake in our ambition to explore new opportunities for ourselves and for our fellow citizens. Yes, the Padma Bridge adds a new dimension to our sense of poetry, to our consciousness of the nature of enlightened, forward-looking government.

That government is a throbbing, thriving experience is the old, raw truth emerging out of the waters of the Padma and reaching out to the steely frame connecting the country, one end to another.

This morning, as the Padma Bridge is inaugurated by the nation's Prime Minister --- a leader who has demonstrated before the world that Bangladesh's self-esteem is the central idea which has consistently underpinned its ethos --- it is pride, justified and definitive, which we give voice to.

This morning, it is not the doomsday pundits and the naysayers --- those who did not think we could span the two banks of the mighty river by this gigantic symbol of modern engineering, who questioned the nation's ability to accomplish an undertaking of this magnitude --- we will speak of or draw attention to.

This morning, it is time for a renewal of the Bengali nationalistic spirit. The intrepidity which once caused us to march off to the war we meant to wage for national liberty a half century ago was the boldness which we reworked, in grit and determination, in raising the Padma Bridge across the waters of the Padma.

We will cross the Padma, humming the old but poignantly remembered lyrics of 'Padma-r dheu re mor shunno hridoy podmo niye ja. . .' The boatman's song will reverberate in us this morning as the bridge opens, for all of us to journey across.

And we will remember the hamlets and villages which have generationally enriched the Padma, those old epics which resonate in us even at this distance of time. When Shyamal Mitra sings 'Padma nodir pare amar chhotto shobuj graam …', we will go on a new search for that chhotto graam, that little village.

The Padma Bridge will take us there, for the little village is, again, a metaphor we connect to the new metaphor today. This morning, poetry and life will come together in charming union.

The Padma Bridge is a quantum leap into the future, a reaching out to heightened degrees of prosperity. Industries will grow on the strength of the bridge, around it; employment will be generated for the young; education will bridge lives to the times to be.

Given pragmatic policy planning, the Padma Bridge will be a spur to the growth of local government, enabling our citizens inhabiting the tens of thousands of villages across the land to sow the seeds of the economy on home ground and reap the harvest for an entire nation to marvel at and benefit from.

The Padma Bridge reinforces our ideal of nationalism, our understanding of ourselves. Today, as this huge engineering feat arrived at through expenditure borne by the nation --- funds that were our own --- it is that old, powerful call of freedom which comes alive again. 'Tomar amar thikana Padma Meghna Jamuna' was the revolutionary slogan we chanted in the build-up to freedom back in March 1971.

We will translate this slogan into spirited music today, to remind ourselves of the long road we have travelled in all these decades, despite our tribulations, despite the miseries thrown our way by men and women of insidious intent.

The resilience of a people, the power of government, the wisdom ingrained in pragmatism are the images which shine forth this morning across the sun-kissed waves of the Padma. There are the truths, universal and renewable, which paint this new dawn in all the colours of glory --- that political leadership is a moral undertaking, that fulfilling pledges is an ethical compulsion.

The Padma Bridge will forever stand as a testament to good, strong and purposeful leadership. It adds a fresh new chapter to the ability of Bangladesh's people to have dreams reconfigured into achievements, to have them note that beyond everyday partisan politics, beyond the narrow alleys and lanes of quotidian despair lies an expansive landscape of magic touched by the mysticism of good governance.

Today we turn a new page in our history, through informing ourselves that political independence must open up the path to economic emancipation. That was the lesson imparted by Bangabandhu an eternity ago.

It is the lesson we see being fulfilled, in a dramatically dynamic way, through the Padma Bridge formally rising over the turbulent waters of the mighty Padma.

The lord Buddha, that exponent of timeless spirituality, enlightened us long ago on the nature of faith. You trek down to the bank of the river, take a boat to the other bank and carry on. That is faith. That is belief taking you to a higher plane of experience.

Our faith carries us, by way of the Padma Bridge this morning, to the other bank, at which point our journey moves into deeper terrain. The Padma Bridge has imbued us with the faith and courage to be on our own, to be ourselves, to meet the world on our own terms.

We have come to the bridge. And we have crossed it.