Are enough actions being taken to ensure safe working conditions in RMG industry? 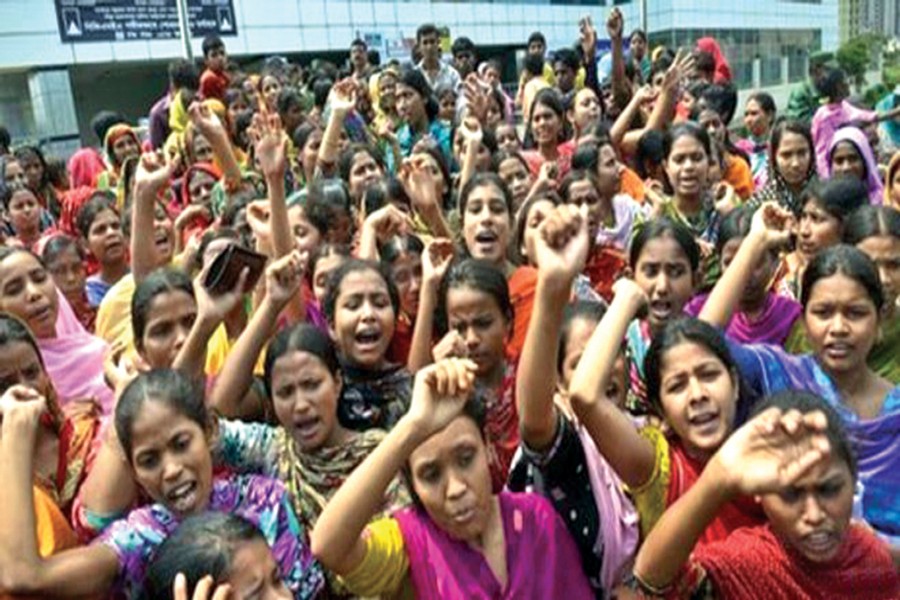 The Readymade Garments (RMG) industry in Bangladesh has been under considerable scrutiny owing to a range of high-profile disasters over the last decade.

Overview of RMG Industry in Bangladesh: The history of the Readymade Garments sector is a fairly recent one. The garment industry is the main source of foreign exchange for Bangladesh. It acts as the backbone of our economy and as a catalyst for the development of our country. We take pride in the sector that has been fetching billions of dollars in export earnings and creating jobs for millions of people, especially innumerable uneducated women, in the country.

The 'Made in Bangladesh' tag has brought glory for Bangladesh: When our lone export earner - the jute industry - started losing its golden days, it is the RMG sector that replaced it, and then, overtook it. The sector has contributed significantly to the Gross Domestic Product (GDP) of the country. It is credited with bringing 82 per cent of total export earnings of the country. The RMG industry has expanded dramatically over the last three decades.

There is a challenge to ensure all garment factories, export-oriented or domestic suppliers, in the country have basic amenities. It is the high demand for cheap clothing that led to the poor working conditions in many cases. Almost all the garment workers come from poor families who suffer from a lack of nutrition and health services.

It is mandatory for the factories to undertake safety measures for their employees, but due to shortage of proper facilities and resources, the workers are being deprived of their basic needs. As a result, countless accidents are occurring in factories throughout the country.

Some important reasons behind these accidents are given below: Exit routes are blocked by storage materials; Machine layout is often staggered; No provision for emergency lighting; Absence of signs showing escape routes; Absence of adequate doors and staircases for quick exit; Lack of proper maintenance of fire exit or emergency staircases; and Parked vehicles and piles of goods and rubbish outside the building obstruct exits.

The Most Catastrophic Tragedies: Two deadliest tragedies took place in the garment sector in the last five years. The one is Rana Plaza collapse in 2013 when over one thousand innocent workers were killed, sending shock waves across the world.

This incident took place just months after another tragedy - a devastating fire at Tazreen Fashion. It was a crucial juncture for the RMG sector.

The Rana Plaza Collapse: The eight-storey Rana Plaza building housing several garment factories collapsed in Savar on 24 April 2013 due to a structural failure. As many as 1,134 workers were killed and more than 2,400 people injured in the collapse.

Shortly after the collapse, the Bangladesh government formed a high-level committee to investigate the disaster site and determine the causes of the tragedy. During the investigation, it discovered several factors contributing to the Rana Plaza collapse, most of them developing at the very beginning of its construction.

These factors were: Unsuitable land for multi-storey construction; Use of poor quality construction materials; Load placed on the building that was not within design criteria; Poor regulation and enforcement of building codes; High demand within the garment market

The Rana Plaza was originally designed as a four-storey building primarily to house retail stores, but was occupied by garment factories instead. Rana Plaza's architect Massood Reza said the building was not designed for industrial use. Other architects also stressed the risks involved in placing factories inside a building designed only for shops and offices, noting that the structure were potentially not strong enough to bear the weight and vibration of heavy machinery.

The media coverage of this incident, both in Bangladesh and overseas, was more intense and widespread than in any other previous cases of accidents in the RMG industries worldwide.

Tazreen Fashion Fire: On 25 November in 2012, a devastating fire ripped through the Tazreen Fashion factory at Ashulia on the outskirts of Dhaka, claiming the lives of 112 workers and injuring many more.

The fire, presumably caused by an electrical short-circuit, started on the ground floor of the nine-storey factory, trapping the workers on the floors above. Because of the large amount of fabric and yarn in the factory, the fire quickly spread to other floors, complicating firefighting operations. The fire burned for more than 17 hours before the firefighters managed to douse it.

Factory fires, such as this one, are sadly all too common in the RMG industry. Various factors are responsible for such tragedies. The factors include overcrowded production lines, electrical faults, inappropriate storage of inflammable chemicals, faulty fire extinguishers and fire exits being obstructed by inventory.

The Aftermath of the Tragedies: In the weeks following the tragedies, public protests were commonplace.

The tragedies caused outrage among the people and voiced their demand for a change in the working conditions in the industry.

The authorities also took some remedial measures-changes are being made in the Bangladesh building code, inspection procedures and safety standards of factories.

Following pressure from the public and persuasion by foreign governments, international organisations and retail companies, three major initiatives have been taken to improve the factory conditions and enforce regulations designed to encourage safe construction and work practices, empower the industry to have more regular inspections by hiring additional inspectors, and increase factory owners' involvement by requiring them to pay for upgrades to their factory buildings in order to meet appropriate safety standards.

The Compact is built on short- and long-term commitments related to three inter-linked pillars: 1) Respect for labour rights; 2) Structural integrity of buildings and occupational safety and health; 3) Responsible business conduct.

Since the launch of the Compact, its partners have held regular follow-up meetings and videoconferences.

The actions taken by the European Union (EU), the United States (US) and the International Labour Organisation (ILO), including the negotiation and monitoring of a Sustainability Compact, have created opportunities for progress.

Now the question is, "Has there been any real progress so far?"

It seems that Bangladesh has failed to comply with the terms of that Compact, despite the substantial financial and technical support of a number of foreign governments and the ILO. A combination of lack of political will, failure of intra-governmental coordination, high levels of corruption and the extraordinary dominance of the garment sector in government have meant that the hoped-for responses to the catastrophes of 2012-13 have been limited.The government has missed the deadline to recruit factory inspectors. Further, even when factories are inspected, we do not see evidence that inspectors have regularly undertaken the necessary corrective follow-up inspections in fire and building safety and labour rights.

Nevertheless, the government of Bangladesh has increased pressure on the initiatives.

The Department of Inspection for Factories and Establishment (DIFE) has established an RMG Sector Database. However, the database includes no more substantive content, such as violations identified, fines and sanctions administered, factories closed or relocated or violations remediated. Only the private initiatives have published any factory reports.

The RMG industry in Bangladesh has acted as a catalyst for the country's recent growth and development. With recent developments, Bangladesh stands in a critical position. It is facing both internal and external issues which have either short-term or long-term effect on RMG firms, or a combination of both these effects.

Right now, there are two prominent coalitions working to improve factory safety in massive and unsafe garment industry. Fixing these problems is an enormously complex undertaking, but it's a necessary one.

In the meantime, the general public could be encouraged to educate themselves about the RMG industry and come forward to help the government reach its goals for the industry by spreading awareness about the safety and security issues of this sector.

Given the remarkable entrepreneurial initiatives and the dedication of its workforce, Bangladesh can look forward to advancing its share of the global RMG market.

Labiba Fairooz is a student of North South University.