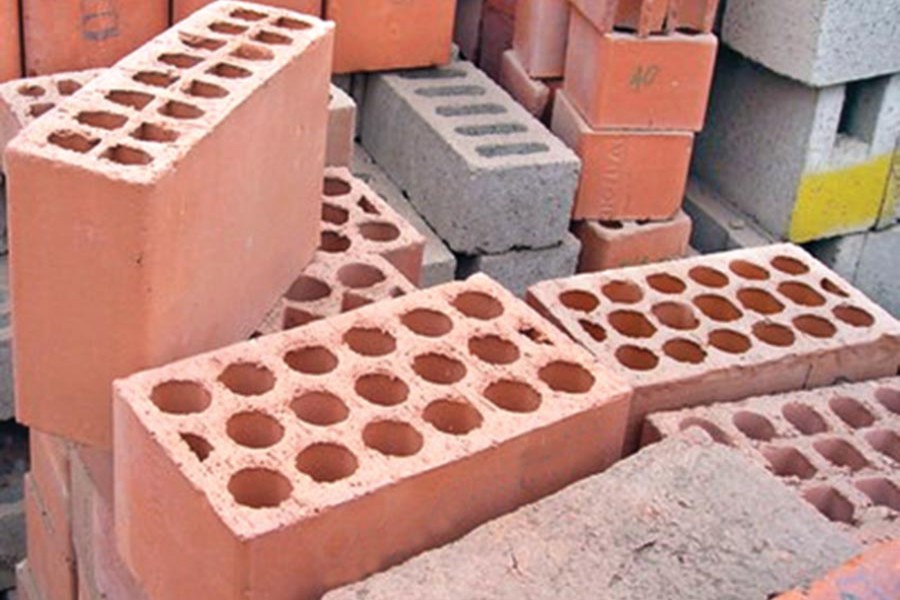 Locally-invented "green blocks" are gradually becoming popular in the country's growing construction sector. These blocks are cheaper, environment-friendly and disaster-resilient.

People at the Housing and Building Research Institute (HBRI), the state-owned key promoter of the brick, told the FE that the brick already grabbed 10 per cent share of the market.

Currently the country produces around 25 billion bricks a year. Around 60 million tonnes of topsoil are used to meet this high demand and that causes dust pollution and degrades the soil quality significantly.

Many studies show that brick kilns in and around Dhaka are responsible for a big share of the densely-populated capital's air pollution.

Besides, they emit 15 million tonnes of carbon into the air, according to the HBRI.

The use of the block can minimise construction cost by 30 per cent, but its key feature is it saves farmland and cuts air pollution.

Mohammed Shamim Akhter, director at the HBRI, told the FE that the demand for the brick was on the rise.

He said it would expand fast shortly as many were yet to know about the new invention of the institute.

However, the people at the HBRI in the city told the FE that the demand for the block was on the rise, as the private sector realtors were opting for use of the disaster-resilient and environment-friendly construction material.

The big real estate companies are also producing the key building materials on their own premises, as it needs a small piece of land and investment. It reduces the carrying cost of brick as well.

The statistics provided by the HBRI suggest more than 40 top realtors in the country have already set up their own factories for ensuring their own supplies of the building material.

The item can be made in different sizes depending on the designs of the buildings. The brick also called "hollow block", can be of 24 types.

The brick does not need any boiling in the kilns, which have been taking a heavy toll on the country's environment for decades, immediate past director Mohammad Abu Sadeque at the HBRI told the FE.

The brick was first used on the HBRI campus during 2015-2016. It was used in two two-story buildings on its campus. The same was also used in fencing off the boundaries.

Mr Sadeque said the new bricks were used to build a primary school in Nalitabari of Sherpur district during 2016.

"That one-storey building was 30 per cent cheaper than one made with conventional bricks," said Mr Sadeque who had long served at the organisation.

The bricks for the school were produced using a machine that can be transported to the place where the mud is excavated, lowering the costs further.

The machine can manufacture nearly 7,000 bricks a day, and the institute plans to use it for large-scale production of its building materials.

The compressed earth blocks are usually made of soil dredged out of rivers and cement.

People at the HBRI said the manufacturers could use sand derived from dredging as the key raw material for producing the natural block.

The mix of the brick is sand accounting for around 80 per cent and cement 20 per cent.

The bricks do not require to be baked in a kiln, but simply harden in the sun.

The new bricks are also lighter than traditional ones, making them easier and cheaper to transport.

The block is cheaper as each brick costs Tk 6.0 to produce, compared with a cost of Tk 12 for every traditional brick. But each block is bigger than the traditional brick size. It is equivalent to more than 1.5 bricks.

Apart from this, there are many firms that are not directly involved with the real estate business but producing the blocks in different parts of the country.

Two such factories were built in Munshiganj and one in Manikganj.

A managing director of a real estate company in the city said the country set a target to bring the topsoil use for brick kilns to the zero level by 2020 to save farmland.

He said the government set the target keeping in mind the necessity of substitution of bricks.

The green bricks proved much cheaper and environment-friendly, he said.

The HBRI says that each working day around five-six entrepreneurs visit their office at Darus Salam in the city expressing their interest in commercially producing the bricks and blocks.

"We are getting huge response from the people as they visit our office and want to know about different technical issues relating to manufacturing it," said Aktar Hosen Sarkar, a senior scientific officer at the HBRI.

He also said if the people wanted to learn about the environment-friendly technology, the institute would be happy to train them.

He also said they had been working on exemption of VAT and tax at the production level of the brick.

"We've already sent our proposal to our ministry to discuss the issues of tax and VAT exemptions for the local enterprises with the National Board of Revenue (NBR).