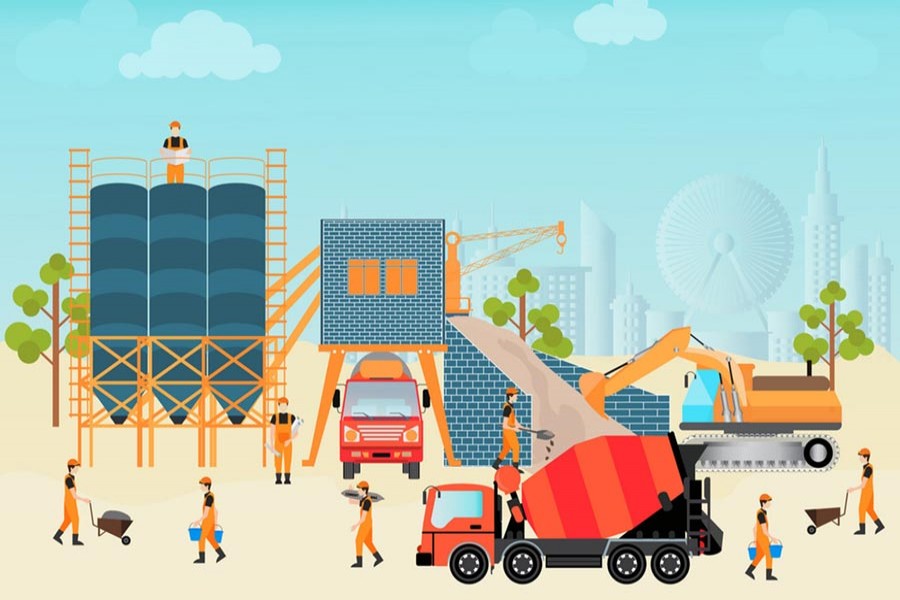 Rapid urbanisation and large government infrastructure projects are helping boost the country's cement industry, as the sector has geared up to Tk 290 billion in terms of annual turnover.

The cement industry has been growing by more than 10 per cent year-on-year for last one decade.

However, the sector achieved a robust growth of 12 per cent in the last calendar year as the quantity of sale of construction materials was a record 33 million tonnes, according to the Bangladesh Cement Manufacturers' Association (BCMA).

Local companies hold more than 85 per cent of market share thanks to attractive prices and quality, BCMA data showed.

"Despite the manufacturers facing many challenges, the sector has been showing notable growth for last one decade," Mohammed Amirul Haque, managing director of Premier Cement, said.

He credited the increasing demand from individual homebuilders, mega projects, and rebounding real estate, for the growth.

"The recent growth of the cement industry is also being driven by the rural economy, which is developing and will expand further," he said.

He said people in the rural area are now building homes using bricks instead of CI sheets.

"Schools, colleges and other structures are being built across the country and the government's consumption has also seen substantial growth," he said.

But the sector has been passing through many challenges following rise in costs of raw materials including clinker, gypsum and slag.

Depreciation of Taka against the US Dollar has also been compounding woes of the local players, he said.

"These factors also have contributed to consistent rise in the demand for construction materials such as cement," he said.

He pointed out that large government infrastructure projects have sustained the growth in cement demand amid a slow real estate recovery.

This trend is making competition in the market tough, resulting in decline in prices.

Raw material prices increased in the last one year sharply by 8.0 to 10 per cent as clinker price skyrocketed to US$ 44-$ 45 a tonne, said Shahidullah.

Transport cost has also seen a sharp increase due to the weight (axle load) restriction imposed by the government on highways.

But the manufactures did not raise prices of the material, he said.

Cement of different brands are being retailed at Tk 400 to Tk 450 a sack (50 kgs) in the country for the last fourteen months, Mustafizur Rahman Pintu, proprietor of Sardar Traders at Manirampur, in Jashore, told the FE.

"But there is a twist in wholesale prices," he said.

Senior vice president of the BCMA Manwar Hossain, said the industry used to produce only ordinary Portland cement using 95 to 96 per cent of clinker two decades back.

"We are producing verities of high-quality cement now. Besides, producers are bringing in modern technology, making the manufacturing process more efficient," he said.

He said we relied heavily on imports for cements some twenty years back.

"But now we are self-sufficient and looking to seize a sizable global market share," he said.

For such condition, many companies could not even make profits last year.

He expected that the current business trend will continue in the next two to three years "as consumption will not double overnight."

"So mill owners have to increase efficiency and productivity in all areas," he said.

According to the BCMA, local companies met 85 per cent of the demand while foreign companies delivered the rest last year.

Mostafa Kamal, President of BCMA said the country has been able to sustain its GDP growth within 7.0 per cent for last few years.

He said rising population, low labour cost, rapid urbanisation, fast industrialisation and mega projects might continue supporting the country's growth which is also expected to remain so in the upcoming years.

The country's strategic geographic location has led to increasing levels of infrastructure investments from China, India and Japan.

He pointed out that this positive outlook is also leading to significant investments in the country's cement production capacity expansion which may result in continued price pressure in the market.

However, Mr Kamal, also Chairman of Meghna Group, which markets Fresh Cement, echoed weight (axle load) restriction set by the government as a problem for the sector.

He said a single truck can now carry highest 240 sacks of cement, down from 500 sacks previously because of the load restriction, which has increased both demand for vehicles and carrying costs.

He said the government should make the river route smoother to take uninterrupted movement of raw materials and finished products away from the roads.

It will help the industry expand business further, he said.

However, the country is almost dependent on cement raw materials like clinker.

Only two local two companies -- the state-run Chhatak Cement and private company LafargeHolcim have their own clinker plants.

According to the Export Promotion Bureau (EPB), cement exporters made shipment worth $12 million in the last fiscal year (FY' 18).