Sale of bricks, sand to rise in coming days 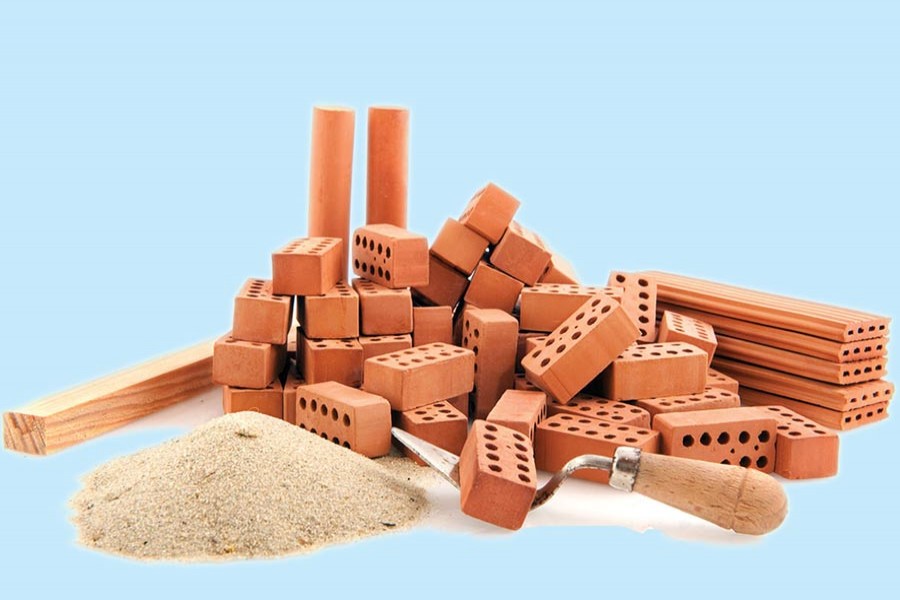 Demands for bricks and sand have been on a downward trend in the recent days amid price hikes of the major construction materials, insiders said.

Brick traders and industry insiders have attributed the situation to a lower demand of bricks and sand primarily because of a slow pace of construction works.

However, prices of both bricks and sand have increased in recent times.

Traders have identified some factors like increased raw materials costs, higher coal price and higher labour cost for the hike in brick prices.

Without specifying the reasons, traders said a slowdown of construction works due to recently held national elections and presence of what they alleged 'a syndicate' might have linked for the rise in sand prices.

Besides, supply shortage might lead to the price hike of sand as the suppliers also claimed a less-than-expected of sand supply, the sand traders said.

Talking to this FE correspondent, Md Gausul Azam, a manager at BD Construction, a online construction management and designing-construction firm in Dhaka, said the total construction works have declined to 20 per cent from November last year.

Giving no reasons of such slow sale of the brick and sand, he alleged that the real estate companies were making apartments in sluggish manner.

The manager observed that brick and sand prices have registered a hike now-a-days compared to the last year.

Mr Azam hoped that the market might be normal in March.

Saleh Ahmed, a proprietor of Messrs Nahian Traders at Gabtoli's Balughat area, told the FE that he did not sell any bricks in last one week as market demand for bricks went on a downward trend in recent days.

The lower demands of bricks hit his business and that of the traders in the area hard, he said, adding that he sold at least one truck of bricks in a day in four months ago.

All the traders of the area are facing the same kind of problem, Ahmed said.

He said the realtors and people are not building houses right now. So the demand has fallen drastically.

Mr Masud hoped that sale of such items would increase in the coming days.

Siddikul Islam, a manager of Messrs Ajuya Enterprise, which sells brick, sand and stone, at capital's Gabtoli Balughat area, said the sale of sand has been low since November last year.

The buyers feel reluctant to buy the sand at such higher prices, the manager told the FE.

However, he said the prices of sand differ from trader to trader as quality varies. The sale of sand also depends on seasons. The peak season of sale of sand is the rainy season.

He was selling five to ten trucks of red sand in one day which was nearly 20 trucks a day in October last year, he said.

Masud Rana, a manager at Messrs Nur-A-Modina Traders, in the same area said the sale of sand is very low as people are taking time to think about starting their construction works.

He hoped that the sale would increase within the shortest possible time.

Now he is selling two to four trucks of sand in a day while it was eight to ten in October last year, Mr Rana said.

Every day as many as 200 trucks of sand are sold here, he said, adding that an estimated worth Tk 1.8 million of sand is sold each day at the Balughat area.

Current market value of the brick kiln industry is estimated nearly Tk 255 billion. The sector is growing five to seven per cent annually, according to the Bangladesh Brick Manufacturing Owners Association (BBMOA).

The quantity of coal imported into the country is increasing 5.0 to 7.0 per cent every year. An estimated 2.0 million people are involved with this sector directly or indirectly, the BBMOA data added.

The industry is currently producing approximately 30 billion of bricks annually, according to the data provided by the Department of Environment (DoE).

As many as 7,882 brick kilns are in operation in the country. Of the total, 71.64 per cent of the brick fields are using environment-friendly technology, the DoE data revealed.

Mizanur Rahman Babul, president of the BBMOA, said current condition of business of the industry is not good as market demand is very low.

Manufacturing cost of bricks has increased a lot as coal price is higher currently, he said.

Babul said lower market demand might be due to scarcity of money of the people and less sale of ready apartments.

Labour wages have also increased. The labourers demand higher wages but their work is substandard.

The DoE also is conducting drives all of a sudden and imposing fines as the brick manufacturers have not renewed their licences, he said.

Mr Mizanur complained the raids had been a great nuisance for us as the DoE is not giving us time for licence renewal. Rather it is creating problems for us.

Another problem created in recent times that Directorate of National Consumer Rights Protection is also realising fine from the brick makers due to the smaller size of bricks after launching drives, the BBMOA president said.

He admitted that some brick makers were producing such smaller size of bricks which was not of the standard size.

The standard size of a brick is 10x5x3 inches. But some brick makers in some brick kilns are manufacturing measure 9x4.5x2.8 inches bricks.

He pointed out that some new entrepreneurs were coming to this sector with the hope of gaining quick profit.

Md Abu Bakar, secretary general (SG) of the brick makers association, said demand for bricks has been low now-a-days due to the seasonal change.

He said that demand and price of bricks fluctuates and would be normal soon.

The demand for bricks is mainly increased in rainy season, he said.

Abu Bakar also observed that the demand is somewhat normal in the market.

Current drives by the DoE have created a big problem for us as it hits our business hard, he said.

The incumbent government is committed to reduce the use of soil by 2020 as it promotes using blocks to protect environment from severe pollution, the SG Abu Bakar mentioned.

If the government initiates starting all public construction works by the use of blocks mandatorily across the country, then the brick makers will also launch manufacturing the item in full swing, the secretary general said.