The calamitous month of August and the catastrophic fifteenth 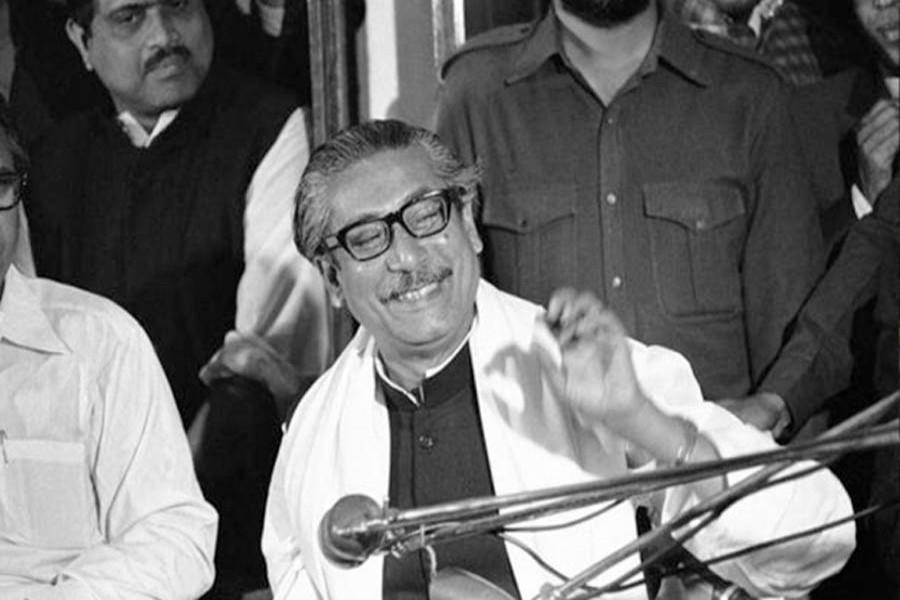 This Fifteenth of August marks the 46th anniversary of the brutal assassination of Bangabandhu Sheikh Mujibur Rahman, the Father of the Nation and many members of his immediate family. On this day of the tragic month we need to acknowledge once again the historic role he played as the master helmsman in the creation of an independent country called Bangladesh. We also need to remember how he subsequently safely guided our ship through troubled waters amidst a devastated post-war scenario.

This day and the month of August assume many special connotations for the people of Bangladesh. It has to be seen also against the backdrop of the birthday of Captain Sheikh Kamal on August 5 and the birthday of Bangamata Fazilatun Nesa Mujib on August 8. They were both murdered on the 15th along with many others who were part of the family of Bangabandhu. This included the two other sons of Bangabandhu-- Captain Sheikh Jamal and Sheikh Russel, the two wives of Sheikh Kamal and Sheikh Jamal and many near relatives who were part of the family. This most unfortunate situation created a denotation that has not happened elsewhere in the world.

No allusion to Bangabandhu, our charismatic leader, will be complete without referring to his vision as outlined in his remarks at Palam Airport, New Delhi on January 10, 1972. He described his journey to a free Bangladesh as 'a journey from darkness to light, from captivity to freedom, from desolation to hope'. He also reiterated that he was going back to his independent country 'not with hatred in my heart for anyone, but with the satisfaction that truth has at last triumphed over falsehood, sanity over insanity, courage over cowardice, justice over injustice and good over ill'.

We must not forget in this context the efforts undertaken by him in successfully providing relief and rehabilitation to more than ten million displaced persons and in the undertaking of measures for restoring order and stability within a war-ravaged economy. This effort and approach on his part was consistent with the courage and determination that Bangabandhu had demonstrated in the political arena between 1948 and 1971. He had welcomed incarceration on several occasions, stuck to his task and his conviction and disagreed with compromises and half-way solutions. This transformed him into the symbol of freedom and independence. His efforts in this regard always received the support of his wife Bangamata Fazilatun Nesa Mujib despite severe domestic difficulties for the family. She held her head high despite having to resolve sudden problems.

It may be mentioned here that Mr. R.N. Rao Chief of Indian Intelligence Agency RAW and Indian High Commissioner Samar Sen had both warned Bangabandhu about plots being hatched by some against him on August 6 and 7 and that he needed to be more cautious in terms of security for himself and his family. However, Bangabandhu's love for the people of Bangladesh persuaded him, most unfortunately, to disregard this warning.

The August putsch was carried out by certain sections of the armed forces and a group of power-hungry disgruntled politicians. The voice of liberty was snuffed out by the very men trained to save, rather than maim.

Murder was bad enough but what followed was even worse. On September 26, 1975 through an Extraordinary Bangladesh Gazette Notification, the usurper President Khandker Moshtaque Ahmed and his compliant Secretary of the Ministry of Law, Parliamentary Affairs and Justice informed the nation that under 'The Indemnity Ordinance, 1975 (Ordinance No. XIX)' restrictions had been put in place with regard to 'taking any legal or other proceedings in respect of certain acts or things done in connection with, or in preparation or execution of any plan for, or steps necessitating the historical change and the proclamation of Martial Law on the morning of the August 15, 1975'. What an abuse of the English language!

The consequence of such lack of accountability was only natural. Murderers did not hesitate to commit another crime. That is exactly what happened on November 3, 1975. Four prominent leaders of the Awami League, formerly Ministers, including the Acting President and the Prime Minister during our War of Liberation were brutally killed within the Dhaka Central Jail. A three member Judicial Commission, as expected, was immediately constituted to investigate the matter, but that was the end of that story. Nothing happened.

The BNP leadership however forgot that what goes around usually comes around. Their espousal of lack of accountability for murder of innocent people came back to haunt the BNP through the assassination of President Ziaur Rahman in May 1981.

Subsequently, it took 21 years before the crime committed on August 15 could be addressed. The Awami League government sworn into Office in 1996, and took two important steps-- the overturning of the iniquitous Indemnity provision and the initiation of a normal judicial process (not through a Special Tribunal) for trying those guilty of the crimes committed on August 15. This measure commendably reiterated the belief of the aggrieved victims in the fairness of our Judiciary. The government also declared that day as the National Mourning Day and a public holiday.

Unfortunately, the new BNP Alliance government (elected to office in 2001) cast basic civility out of the window and on July 28, 2002 cancelled the observance of the National Mourning Day. This was politics of hatred at its worst. The judicial process pertaining to the alleged killers of Bangabandhu was also more or less suspended through machinations between the politicised judiciary and the government in power. It was amazing to see how the virus of 'embarrassment' spread within the echelons of the judicial hierarchy. Fortunately for the people, due process of law and the principles of natural justice were upheld on July 27, 2008 when the High Court declared illegal the cancellation of this significant Mourning Day. I believe that the observance of this day as the National Mourning Day has reaffirmed the establishment of the rule of law.

Since then the country has witnessed the completion of the trial and the execution of the judgment pertaining to some of those who were directly involved in the murders that took place on August 15. There are still some others who were involved in the killing. One can only hope that this cycle is eventually completed.

Bangabandhu will always be remembered for his magnanimity and belief in the people of Bangladesh. This was reflected in his optimism. It was also this spirit that inspired him to rise up to the many difficulties that he had to overcome in the few years after his return to independent Bangladesh. This applied in his efforts to reconstruct a war devastated country. He also had to tread carefully with regard to the unfolding paradigm of the newly independent country's engagement within the matrix of international affairs. He knew how to stride this difficult path with care and sensitivity.

These efforts on the part of Bangabandhu and indirect pressure from Egypt, the then USSR, Afghanistan, India, Iraq and Japan led the UN Secretary General Waldheim to visit Bangladesh on February 9, 1973 to discuss with Bangabandhu how to help Bangladesh in its reconstruction efforts. This eventually led to the formation of the United Nations Relief Operations, Dhaka (UNROD) and subsequently United Nations Relief Operations Bangladesh (UNROB ) after we became a Member of the United Nations in 1974. Within a short time after that, Bangladesh became a member of the Non-Aligned Group, the Commonwealth, the ILO and the WHO and started playing an important role in the diplomatic arena.

In this regard one needs to underline this as a great achievement. On September 17, 1974 during its 29th Session, Bangladesh became the 136th Member of the United Nations. This led to Bangabandhu's addressing the United Nations General Assembly in Bangla (first time any leader had done so in the history of the United Nations) on November 25. During his historic speech he reiterated his belief in friendship towards all and enmity against none.

This vigorous effort enabled us to move forward in the arena of international relations very quickly. By March 26, 1972, when we were celebrating our first anniversary of independence, 54 countries from Europe, Asia, Africa and Latin America had already recognised Bangladesh (as opposed to less than 10 before Bangabandhu's return to Bangladesh). It took time for the USA to accord recognition-- it came about near the middle of 1972.

A gifted orator, one cannot forget his emotional speech delivered on January 10, 1972 at Suhrawardy Uddyan within a few hours of his arrival in Dhaka. It was masterly in its pragmatic approach. At this first opportunity, he did not fail to warn that no one should 'raise' their 'hands to strike against non-Bengalis. At the same time, he displayed his concern for the safety of the 'four hundred thousand Bangalees stranded in Pakistan'. While re-affirming that he harboured no ill-will for the Pakistanis, he was also clear in pointing out that 'those who have unjustly killed our people, they will surely have to be tried'. He also appealed to the United Nations 'to constitute an International Tribunal to enquire and determine the extent of genocide committed in Bangladesh by the Pakistani army.

It may be recalled that later, consistent with this view, on April 17, 1973, after the completion of investigations into the crimes committed by the Pakistan occupation forces and their auxiliaries, it was decided to try 195 persons for serious crimes, which included genocide, war crimes, crime against humanity, breach of Article 3 of the Geneva Conventions, murder, rape and arson. It was also decided that the trials of such persons and others associated in planning and executing such crimes would be held in accordance with universally recognised judicial norms. This argument and the related judicial process were to be central till his murder in August 1975.

Unfortunately, his death also resulted in the setting aside of the entire judicial process.

One needs to conclude by remembering that Bangabandhu was a pious person, who believed in non-communalism and was averse to sectarianism. He was also the symbol of successful secularism throughout the Islamic world.

Muhammad Zamir, a former Ambassador, is an