Towards a prosperous Bangladesh 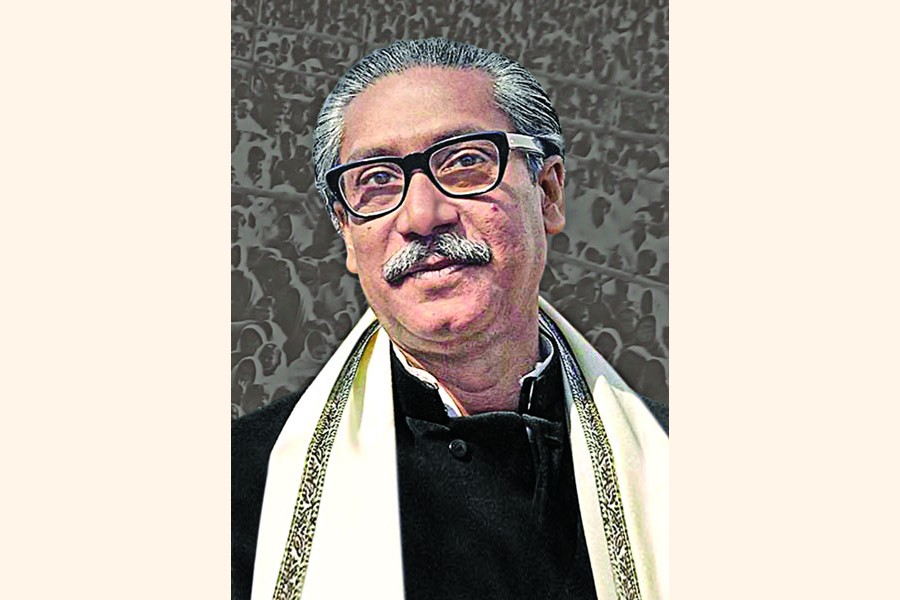 Bangladesh at fifty fulfils most of these aspirations of Bangabandhu who is also the namesake of Bangladesh. On this victory day we are celebrating both the milestones of golden jubilee of independence of Bangladesh and birth centenary of Bangabandhu Sheikh Mujibur Rahman, father of the nation. Bangabandhu's Bangladesh has completed fifty years of its existence with both ups and downs. However, the gains have been more overwhelming defying adverse fallouts. The fighting spirit instilled by Bangabandhu in the mindset of his people helped overcome most of the challenges to take the country into the higher trajectory of growth and prosperity. The newly liberated country under Bangabandhu's leadership started its development journey from a narrow 'metho path' (rural road) with a total size of its economy of 8 billion USD. The per capital income was only USD 93. The share of savings to GDP was just 3 per cent. The same for investment was 9 per cent. The rate of poverty was more than 80 per cent with expectancy of life at birth of about 47 years. The inflation rate was hovering over sixty per cent. The food deficit was staggering in the wake natural calamities and adverse food diplomacy by a superpower instigated by ill-motivated Pakistan which was squarely defeated in 1971 war of our liberation.

That Bangladesh has now been able to reach the broad highway of development with the size of the economy of 411 billion USD with per capital income of USD 2500 plus testifies to the steadfast progress made in the past fifty years.

During last fiscal year Bangladesh's economy growth rate was more than 4 per cent while global growth contracted by 3.5 per cent .

The economy is expected to grow by more than 7 per cent in the current fiscal year as projected by the Standard Chartered Bank and as well as the Bangladesh budget document. The growth rate of Bangladesh remained 6 per cent plus over the last decade or so. The sustainability of this growth rate owes a lot to the fast moving modern and diversified agriculture, consistent inward flow of foreign remittance and stunning performance of the export-sector. The phenomenal growth of apparel industry must be credited for this extra-ordinary performance of Bangladesh economy. The stability of the macroeconomy has also been contributing significantly to maintaining this growth momentum. The farsighted policy for digital technology and inclusive finance has also added fuel to this dynamic growth process which has been augmented by the stability of well performing consumption by the many. That Bangladesh has been performing well in the growth process has also been complemented by other institutional finance and development institutions. IMF's World Economic Outlook of 2021 postulates it to be 6.5 per cent.  World Bank's estimate is 6.4 per cent and ADB's 6.8 per cent.

All these estimates support Bangladesh expectation of becoming a high-income country by 2031 when its growth rate will be 10 per cent, per capita income 12,000 USD plus, inflation contained around 5 per cent, savings to GDP ratio at 37.7 per cent and that of investment at 40.8 per cent. IMF's current World Economic Outlook points out that size of Bangladesh economy will be 517 billion USD in 2026. The Standard Chartered Bank's research team also thinks it to be 500 plus billion USD in another five years.

Centre for Economics and Bureau Research (CEBR), a British think tank postulates Bangladesh's economy will be 34th global economy by 2034. It was 40th in 2021. Others like PwC expect it to perform even better in the coming days.

The nominal GDP per capita was 7.8 per cent in 2019-20 fiscal year defying pandemics challenges as against China's 6.9 per cent and India's 3.1 per cent.

The UN General Assembly recently approved formally the graduation of Bangladesh from the status of LDC to a developing country which will take effect from 2026. Both UK and EU have committed to continue the trade facilities for Bangladesh as it has been getting now up to 2029. Bangladesh will have to invest more in its human resources to make them more efficient to live up to the challenges of a developing country and finally a developed country. Simultaneously, it will have to focus more on smart economic diplomacy and reforming trade policy to sign more free trade agreements and preferential trade arrangements to continue its drive for better performance in exports to avoid middle income trap.

To continue this robust growth process to align Bangladesh's dream of becoming a developed country by 2041, we must remain focused on the following:

• Continue investing in the people promoting productive and humane education, inclusive health system and more robust social protection to address the short-term challenges of the pandemic and long-term challenges of climate change.

• Support tourism and aviation sector with huge potentials in post-covid transformation as this sector may experience V-shaped recovery.

• Further expand software industry which has the potential of becoming second RMGs. Besides high-tech infrastructures give more fiscal support to the R&D for all strategic sectors.

• Focus on sustainable urbanisation which must be green, climate friendly and linked to special economic zone Replicate green Rajshahi as much as possible.

• Emphasise to explore the potential of Bangladesh in joining the regional and global value-chains by further improving connectivity to make Bangladesh a regional hub.

• Mobilise more domestic resources to move up the Tax/GDP ratio to 20 per cent.

• Continue investing in infrastructures, both physical and digital, in addition to completing the mega projects as fast as possible. These will, indeed, be the growth and employment multipliers and turn out to be game changers.

• Finally continue to emphasise on 'Made in Bangladesh' campaign with more rigour.

Bangladesh must continue its experimentations to move forward drawing lessons on what works and what does not within the country's changing dynamics of political, economic and social configurations. It has a rich history of policy innovations, particularly low-cost solutions, to serve many and not a few.

It can certainly cash in on these gains and further innovate its policies, with more emphasis on strengthening the base of pyramid. Quality implementation is a must to live up to its deeply rooted aspirations of shared prosperity for achieving 'Sonar Bangla' (prosperous Bangladesh). Bangabandhu remains the greatest strength for Bangladesh. The entrepreneurial nation keeps on fighting for better Bangladesh deriving strength from the social capital encapsulated in the compassionate leadership of Bangabandhu.

Hail that man, on whose name

The sun shines down eternally,

Like a song comes down the rains of Sravan,

Hail that man, over whose name

Hail that man, on whose name liberation flutters

Hail that man, whose name echoes in

The victory cries of freedom fighters."