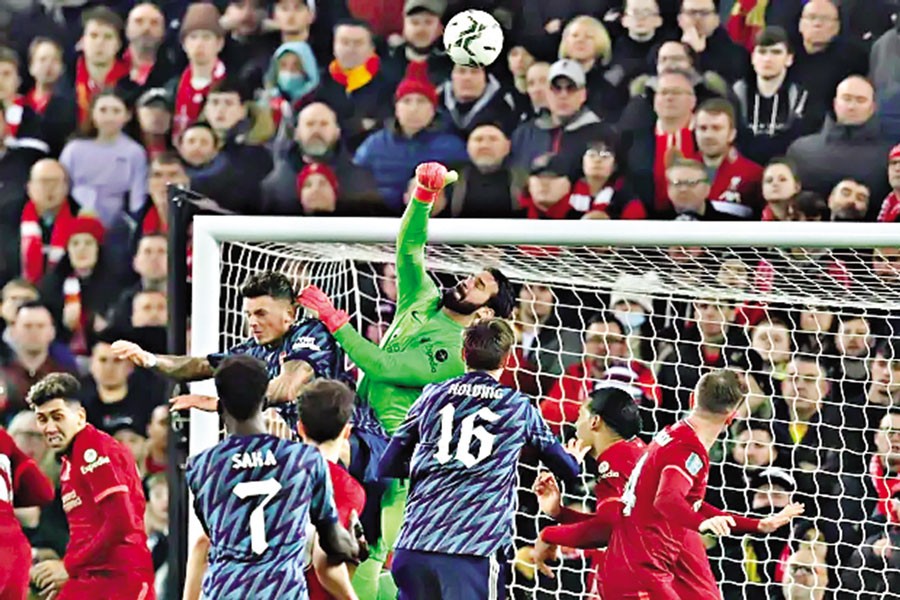 LIVERPOOL: Arsenal had one or two opportunities themselves to score but were also denied during their English League Cup semi-final first leg football match against Liverpool here Thursday — AFP

LIVERPOOL, Jan 14 (AFP): Arsenal held out for over an hour a man down to leave their League Cup semi-final with Liverpool delicately poised after the first leg ended 0-0 at Anfield on Thursday.

The Gunners looked set to pay for another moment of madness from former captain Granit Xhaka when he was sent off for chopping down Diogo Jota after just 24 minutes.

However, Liverpool badly missed the firepower of Mohamed Salah and Sadio Mane as they laboured to even create chances against the 10 men.

"We revel against the situation. The players showed great fight, determination, brotherhood. You saw the emotion, we never gave up," said Arsenal manager Mikel Arteta.

Chelsea already await the winners at Wembley next month after the first leg, originally scheduled to be played at the Emirates last week, was called off due to a coronavirus outbreak among the Liverpool squad.

The Reds were missing Salah and Mane due to their international duties at the Africa Cup of Nations.

However, Liverpool otherwise had a clean bill of health and Jurgen Klopp named the strongest side available to him.

The home side had the better of a cagey opening quarter with Ben White's miscued clearance from Takumi Minamino's cross that skewed just wide the closest either side came before the red card.

Xhaka has remained a key player for Arteta despite his disciplinary issues.

But he will miss Sunday's north London derby against Tottenham and the second leg next Thursday after being sent off for the second time this season.

Jota was played through on goal by Andy Robertson's pinpoint long ball and the Portuguese was brutally brought down by Xhaka's lunge.

"We would've preferred to have scored the goal instead of them getting a red card," said Klopp.

"From that moment it looks like we are under pressure.

"But it's a two-legged game and it's half time. I can't remember when it was 0-0 at half time, wherever I've been, and I thought 'we have no chance'. We will give it a proper go."

Arteta responded to the red card by sacrificing Eddie Nketiah for an extra centre-back in Rob Holding and the visitors' back five held up well despite Liverpool dominating possession.

"I don't know if the red card inspired them but it took the fight," added Arteta.

"You need a certain attitude to play in these games and the boys did that."

Minamino had the two clear chances Liverpool did create in the second half.

Firstly, the Japanese dragged his shot wide from a narrow angle.

Moments later a rare Arsenal foray forward nearly resulted in the winner as Kieran Tierney picked out Bukayo Saka, but he could not beat Alisson Becker from close range.

There was further concern for Arteta when Saka limped off in the final stages.

And all his side's good work was nearly undone at the death as Aaron Ramsdale flapped at a cross, but Minamino sliced high and wide with the goal gaping to leave it all to play for in the second leg at the Emirates on January 20.