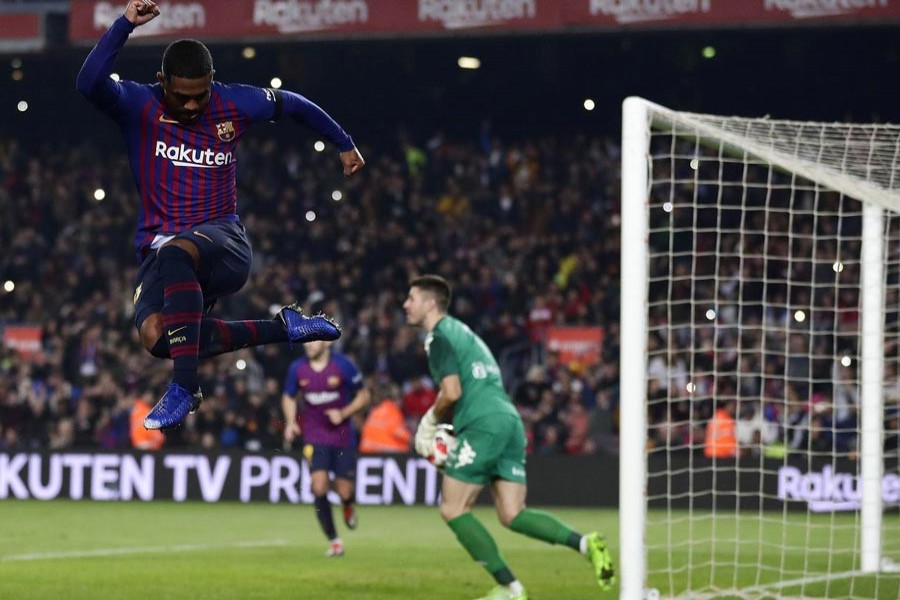 MADRID, Dec 06 (AP): Atletico Madrid was so poor in the first half against fourth-division visitor Sant Andreu that a shock Copa del Rey elimination wasn't a far-fetched possibility on Wednesday.

But three goals in the opening 10 minutes of the second period guided Atletico's second-string team to a 4-0 victory at Wanda Metropolitano Stadium.

Thomas Lemar scored for Atletico in the 48th minute, Nikola Kalinic in the 53rd, Angel Correa in the 55th and Victor "Vitolo" Machin in the 81st to secure Diego Simeone's team a place in the last 16 following a 5-0 aggregate victory.

Atletico was without Diego Costa because of injury, while Antoine Griezmann and several other regular starters were rested by Simeone, who was banned from the bench as he served the second of a three-game suspension following a rant in a Copa match against Sevilla last season.

Substitute Lemar went on at halftime and was key for Atletico, opening the scoring with a right-footed shot from outside the area. Kalinic added a header and Correa produced a fine finish with the outside of his right foot. Vitolo's goal from close range came after a pass by Saul Niguez.

Denis Suarez scored a goal in each half while Munir El Haddadi and Malcom were on target before halftime. Josep Sene netted in the second period for Cultural, the club owned by the Qatari state.

Barcelona midfielder Ricard "Riqui" Puig, 19, set up one of Suarez's goals on his debut.

Toko-Ekambi became the first Villarreal player to score four goals in a match this century, leading the club to an 11-3 aggregate win. He netted three times in the first half and once in the second.

In all first-division ties, Girona came from behind to defeat Alaves 2-1 and advance 4-3 on aggregate, while Real Sociedad beat Celta Vigo 2-0 to go through 3-1 overall.