BD wants to play only three T20s in Pakistan 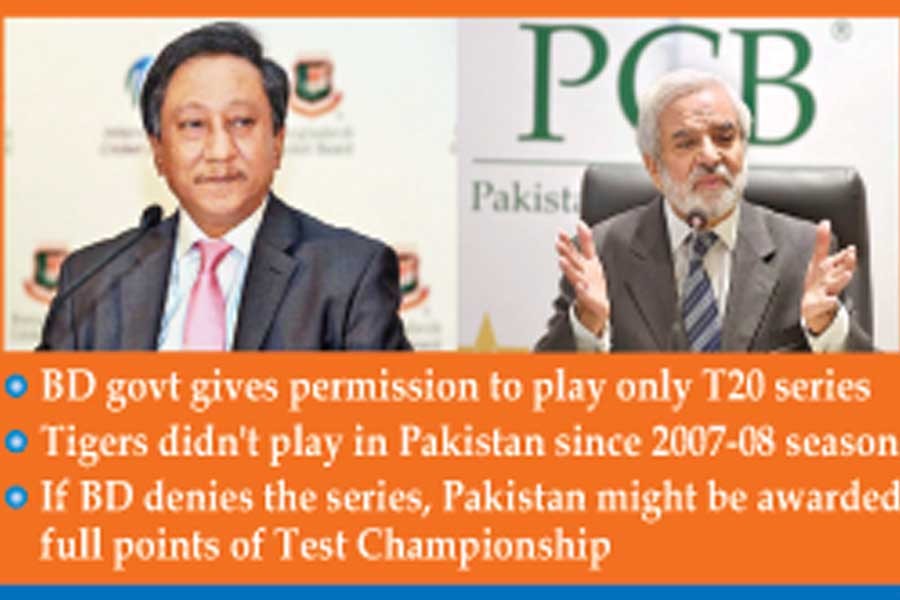 ISLAMABAD, Jan 13 (Agencies): Officials from the Pakistan and Bangladesh cricket boards will meet on the sidelines of an International Cricket Council (ICC) meeting in the United Arab Emirates this week after Bangladesh got permission from its government to only play a short Twenty20 series in Pakistan and not the two Test matches.

Bangladesh Cricket Board (BCB) president Nazmul Hassan said on Sunday his government has given a go-ahead for a short tour to Pakistan comprising three Twenty20s. Pakistan was originally scheduled to host Bangladesh for three Twenty20s and two Test matches in January-February.

The PCB had proposed to Bangladesh that it could defer the T20 series, but Bangladesh must play two Test matches in Karachi and Rawalpindi, which are part of ICC´s World Test Championship.

"Directive from the government is to go for a short tour to Pakistan at this moment," Hassan said after a board meeting on Sunday. "We are always with Pakistan´s initiative to revive international cricket there but at this moment it´s not possible to stay there for a long period. I think they should consider our situation."

"We're yet to get a full security advice from the government. But we've managed a brief report which suggested that we can tour Pakistan for a shorter period. So we've decided to play three T20s. We don't think we can play Test now," he told the media.

He said the security authorities advised BCB to take into account the current situation in that particular region in Middle East and make the tour as short as possible.

"So we have decided to play T20 series only. We might play Tests after peace is restored in the region. We are going to make this offer to Pakistan Cricket Board (PCB)," Nazmul Hassan said.

It had previously proposed to play the T20 series in Pakistan but PCB declined.

"We don't know how we'll play the Test series - whether be it one-by-one or two-match series together. The Test series might be cancelled as well. We already verbally informed PCB," Nazmul said, replying a question about the fate of the Test series which is also a part of World Test Championship.

He explained that security concern was not the only reason behind the decision.

"We understand that the security situation can worsen at any time in any country. The important thing is the security plan that we've been offered," he said.

PCB chairman Ehsan Mani said last month that Pakistan will no longer host its bilateral Test series at a neutral venue after it successfully hosted two Test matches against Sri Lanka in Rawalpindi and Karachi.

The PCB said on Monday that Mani and Hassan will meet in Dubai, after which further updates will be provided.

"The Dubai meeting is a continuation of the discussion process, which the PCB has followed to reach a consensus with the BCB on its national men´s cricket team´s tour itinerary," PCB said in a statement.

Bangladesh´s junior and women's cricket teams toured Pakistan last year, but its national men´s team has not played an international match in Pakistan since the 2007-08 season.

Nazmul said Bangladesh sent women's team and an age-level team to Pakistan. The security arrangement was good. The International Cricket Council sent their match officials to Pakistan after getting advice from their own security specialist.

"We aren't saying that the security situation in Pakistan isn't satisfactory. It's really tough to say no to this tour because Sri Lanka, who were victims of a terror attack in 2009, are saying that they are happy with security. But the situation is different than it was during Sri Lanka's latest tour," he said.

The two-match Test of this series is part of the World Test Championship. If Bangladesh denies the series, Pakistan might be awarded full points. But the BCB boss said they are unaware of the fact.

"We don't know what could happen if we skip the Test series. We still need to know specifically as it's part of an ICC competition," Nazmul told the media.