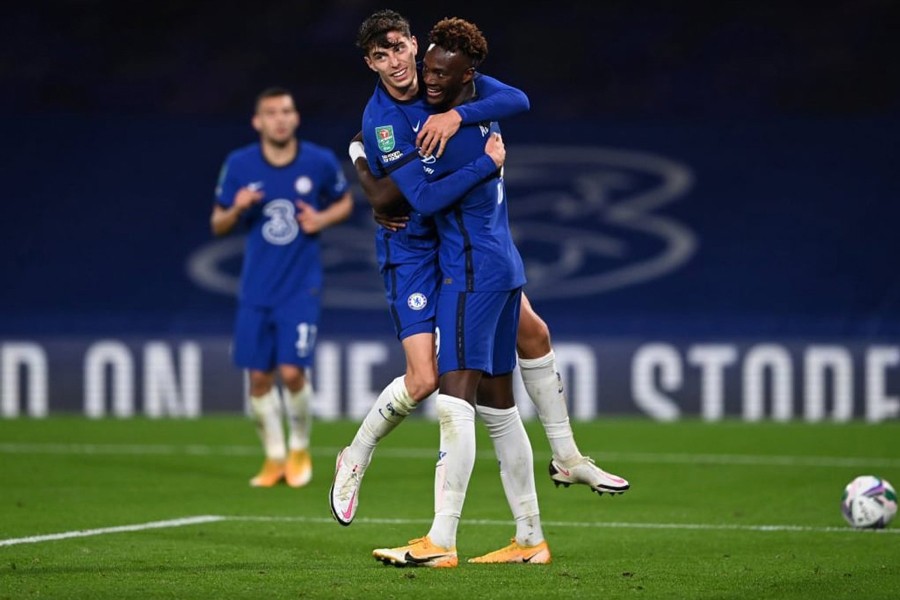 LONDON, Sept 24 (Agencies): Chelsea midfielder Kai Havertz got off the mark with a hat-trick in a 6-0 thrashing of Barnsley at Stamford Bridge in the third round of the League Cup on Wednesday.

Havertz, who joined Chelsea from Bayer Leverkusen for 71 million pounds, started both of his side's Premier League games against Brighton and Hove Albion and Liverpool but showed his class against Championship (second tier) side Barnsley.

The Germany international calmly slotted past Barnsley keeper Bradley Collins from close range to double Chelsea's lead midway through the first half after Tammy Abraham's early strike had put them ahead.

Ross Barkley further stretched Frank Lampard's side's advantage early in the second period before Havertz, 21, struck twice in the space of 10 minutes to complete his treble.

He fired into the net after a backheel pass from Abraham to make it 4-0, then raced on to a long ball from the England forward to round the keeper and dribble into the empty net.

Olivier Giroud completed the rout late on, setting up a fourth round tie away to either Leyton Orient or Tottenham Hotspur.

Meanwhile, Arsenal set up a potential Carabao Cup fourth-round clash with Liverpool after seeing off Leicester at the King Power Stadium.

A Christian Fuchs own goal and a last-gasp Eddie Nketiah tap-in saw the visitors secure a 2-0 victory - leaving them with a trip to either Lincoln or Liverpool next week. This was the only third-round clash between two Premier League sides but neither really resembled their strongest XI with both Jamie Vardy and Pierre-Emerick Aubameyang given the night off. Arsenal then enjoyed a period of dominance, Pepe should have done better when picked out inside the box but tried to cut back instead of shooting and the danger was cleared.

Nelson then passed up a glorious chance of his own as he shot well wide when in a good position, while Bukayo Saka saw a strong penalty claim turned down after being felled by Daniel Amartey.

Rodgers' side finally started to whir into life as the half wore on and Maddison was unlucky to see a curling effort hit the post.

The second half started slowly as torrential rain began to fall over the King Power Stadium as Arsenal took the lead in fortuitous circumstances.