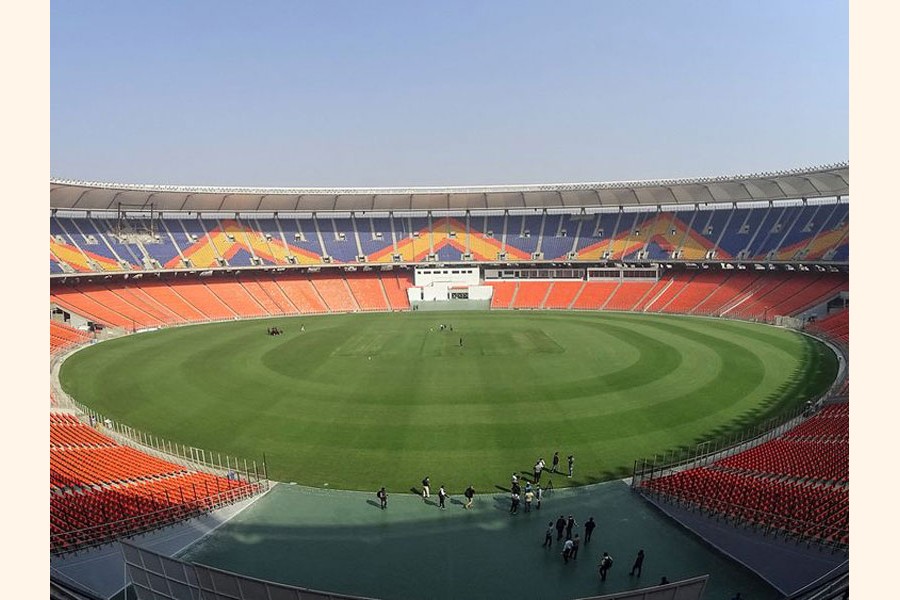 A general view of the Sardar Patel Stadium, the world's biggest cricket stadium, is pictured ahead of the third Test match between India and England, in Motera on the outskirts of Ahmedabad — AFP

AHMEDABAD, India, Feb 23 (AFP): India and England head into a crucial third Test starting Wednesday at the world's biggest cricket stadium with more than a series between two of the biggest rivals at stake, according to their pace spearheads Ishant Sharma and Jimmy Anderson.

With the four-match series tied at 1-1, both sides need a win in Ahmedabad to be able to keep alive their hopes of reaching the World Test Championship final against New Zealand.

India just need to win the series to get through, while England have to win by 3-1. A tied series would let Australia through.

The tension is rising in both camps who each registered a crushing win in the first two matches.

"We have got to win two Tests matches, it is as simple as it gets for us," said Anderson who took crucial wickets in England's 227 run win in the first game.

England have "put to bed the disappointment" of their 317-run defeat in Chennai last week, the 38-year-old added.

"I have just one thing on my mind," responded Sharma, India's 32-year-old veteran who will be in his 100th Test.

"That is to win the next Test, win the series and qualify for the World Test Championship," Sharma said.

"I have just one format to play and this is like a World Cup to me. So if we reach the Test championship final and win, so it's like winning an ICC World Cup."

Pace bowler Umesh Yadav has been added to India's squad for the final two Tests in Ahmedabad after he passed a fitness test following his recovery from a calf injury.

An intense atmosphere is certain at the 110,000 capacity Sardar Patel stadium that was used for a rally by US president Donald Trump last February.

Authorities have said more than 50,000 tickets will go on sale for the first cricket game to be played in the revamped ground.

The pink ball, LED lights instead of usual floodlights and the size of the ground add to the test of nerves, according to batsman Rohit Sharma.

"Whenever you play in a new stadium, that's always a challenge," said Sharma. "Getting used to the lights and the seats in the stadium, because its new seats so obviously it will be shiny."

India's last pink-ball outing ended in a disastrous show in Adelaide when Kohli's team were skittled out for their Test lowest of 36.

The hosts, who beat Bangladesh in under three days in their first day-night Test in Kolkata in 2019, are expected to stick largely to their winning side from Chennai.

Joe Root's England though will be forced to make changes because of their rotation policy.

Moeen Ali headed back home after the second Test loss when he was England's standout performer with eight wickets and a quickfire 43 with the bat.

Off-spinner Dom Bess is expected to get his place back and fast bowler Anderson should return.

"I believe this series is absolutely on a knife-edge," former England spinner Graeme Swann said.

"It is a brilliant place for England to be, and they've got a great chance to go ahead once more. I'm full of optimism going into this game, mainly due to Jimmy coming back.

"He was irrepressible in the first match, and he just keeps defying the odds and gets better and better."

Returning batsman Jonny Bairstow and fast bowler Mark Wood will also be in contention, while Jofra Archer, who missed the second Test with an elbow problem, is expected to make the team.

"Always nice to be in competition for the squad," said a fit-again Archer.

The England paceman said he was looking forward to playing on the new "beautiful" ground in front of the crowd.