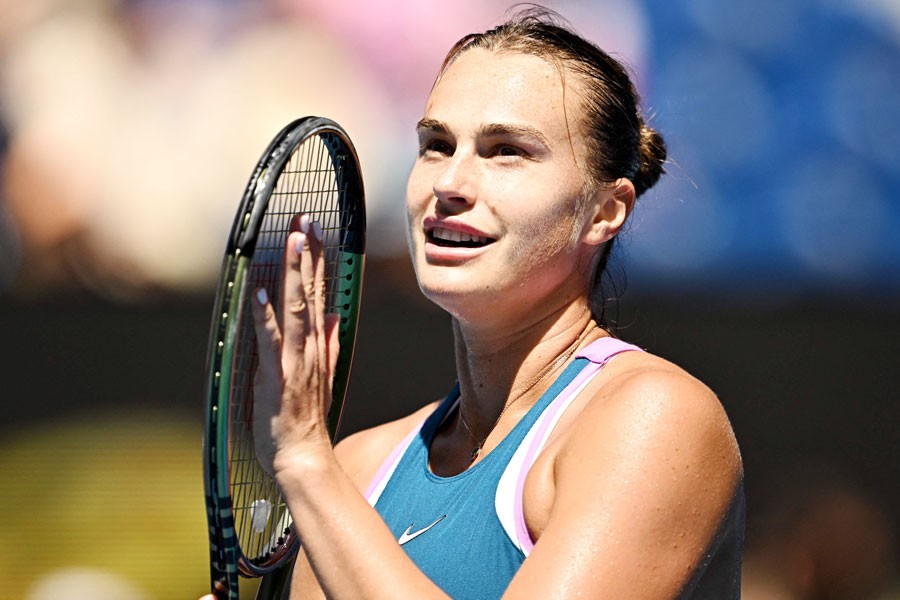 MELBOURNE, Jan 25 (AFP): Novak Djokovic was two wins away from a 22nd Grand Slam crown after bulldozing into the Australian Open semi-finals on Wednesday, while Aryna Sabalenka was equally impressive in reaching the women's last four.

Serbia's Djokovic delivered a masterclass to crush Russian fifth seed Andrey Rublev 6-1, 6-2, 6-4 on Rod Laver Arena and set up a meeting with Tommy Paul for a place in Sunday's final.

Djokovic's quest to go level with great rival Rafael Nadal on a leading 22 major titles carries an air of inevitability.

The 35-year-old has struggled with a hamstring injury in the early rounds at Melbourne Park but was dominant during his fourth-round demolition of Alex de Minaur and was equally clinical against the outclassed Rublev.

"I cannot be happier with my tennis, honestly," Djokovic told an adoring Rod Laver Arena.

"I've been playing very solid from the back of the court and I really love playing in these conditions and this court."

Victory for the red-hot favourite propelled him into a 44th Grand Slam semi-final to close the gap on Roger Federer's all-time record of 46.

Anything other than a rampant win for Djokovic against unseeded Paul would amount to a massive upset, albeit at a tournament that has seen numerous shocks in the men's and women's draws.

But former world number one Djokovic, who can return to the top of the rankings if he wins the Australian Open for a record-extending 10th time, will be a whole new prospect.

Paul, ranked 35, and the Serb great have never played each other before.

"I saw him in the locker room after I finished my match. He said, congrats," said the 25-year-old, adding they had practised together before.

"Obviously he's pretty comfortable here in Australia," the American added. "It's going to be a challenging match but I'm playing some of my best tennis, so it's a good time."

The other semi-final is between third seed Stefanos Tsitsipas and Russian 18th seed Karen Khachanov.

Sabalenka set up a semi-final with surprise-package Magda Linette after once again displaying the kind of form and finesse which has made her favourite for the women's title.

The match was closer than the score suggested, but Sabalenka was in scintillating form -- she is yet to drop a set in Melbourne and has won all nine matches in 2023.

It is a far cry from a year ago, when she struggled badly with her serve and was reduced to tears at an Australian Open warm-up tournament.

"It feels really special to be in the semi-finals here, it was a tough match," said Sabalenka, 24, who was competing in her first Australian Open quarter-final.

"I'm super happy with the win and it was so great to play here today, the atmosphere was unbelievable."

Sabalenka will play unseeded Linette for a place in Saturday's final after the Pole marched into her first major semi-final at the age of 30.

"I'm so emotional, I can't really believe it," said Linette, ranked 45 in the world. "It's a dream come true. I'm super grateful and happy. Thank you for cheering and supporting, I really needed this. "So we keep going. I don't want to get too excited because we are still in the tournament," added the Pole.