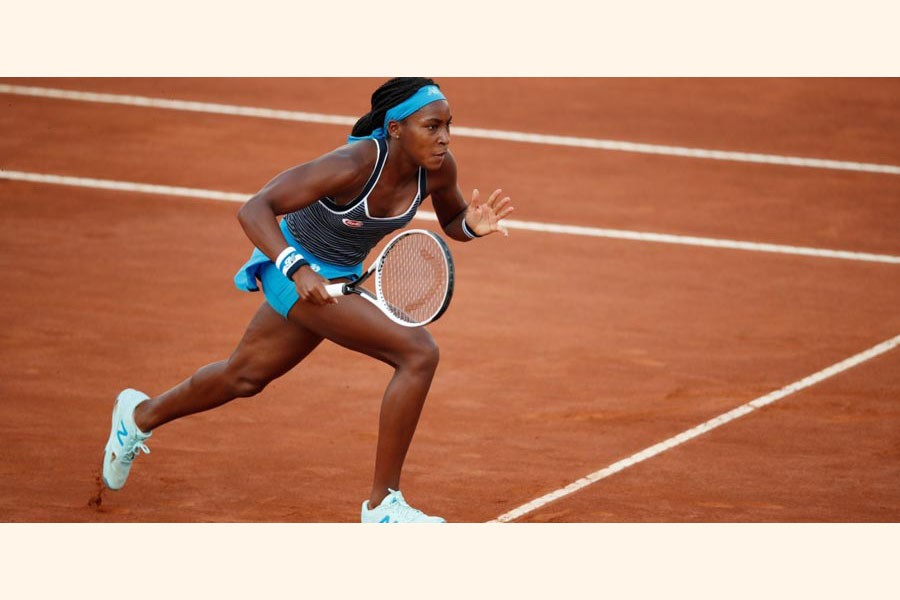 USA' Coco Gauff in action during her first round match against Tunisia's Ons Jabeur at Italian Open at Foro Italico in Rome, Italy on Tuesday — Reuters

NEW YORK, Sept 16 (Reuters): American teen Coco Gauff arrived in Rome on the heels of two early exits in New York and was glad to get her season back on track with a victory over Ons Jabeur at the Italian Open in her first Tour-level main draw match on clay.

The 16-year-old made the fourth round of this year's Australian Open and reached the same stage at Wimbledon last year but suffered a first-round exit at her home Grand Slam at the US Open two weeks ago.

That defeat came after she lost her opening match in the Western & Southern Open, which was also held in the bio-secure environment in New York due to the Covid-19 pandemic.

"I'm definitely happy to get a win today, especially after a couple of tough losses back in New York," Gauff told reporters after Tuesday's 6-4 6-3 win over Tunisian Jabeur.

Australian Open quarter-finalist Jabeur had also lost to Gauff last month in the last-eight in Lexington. She reached the same stage at the Western & Southern Open before advancing to the third round at Flushing Meadows.

Gauff fell in the qualifying rounds of the French Open last year in her only Tour level claycourt event but says she feels at home on the surface.

The French Open, originally scheduled for May-June, was postponed to September 27-October 11 due to the Covid-19 pandemic.

Meanwhile, coming into just his second Tour level match Lorenzo Musetti did not expect to beat three-time Grand Slam winner Stan Wawrinka at the Italian Open on Tuesday but the teenager says he fully deserved his stunning 6-0 7-6(2) victory.

A straight-sets loss to Andrey Rublev in Dubai in February was Musetti's only Tour-level appearance before the claycourt matchup against Swiss Wawrinka, who counts the French Open among his three major titles.

"I think it's a dream that came true. I'm still not believing what I did tonight," Musetti said, adding that he used to visit the Foro Italico complex in Rome with his friends to watch the likes of Rafa Nadal, Roger Federer and Wawrinka play.

As a junior the Italian finished runner-up at the 2018 U.S. Open and won the Australian Open in 2019, the same year he turned professional.

The 18-year-old, ranked 249, needed a wildcard to play the qualifiers in the Masters 1000 tournament and was getting close to matching his career earnings of $70,000 from just one event.

"I don't know how many points I got, how much money," Musetti told reporters. "I just enjoyed the match and I had a lot of fun tonight.