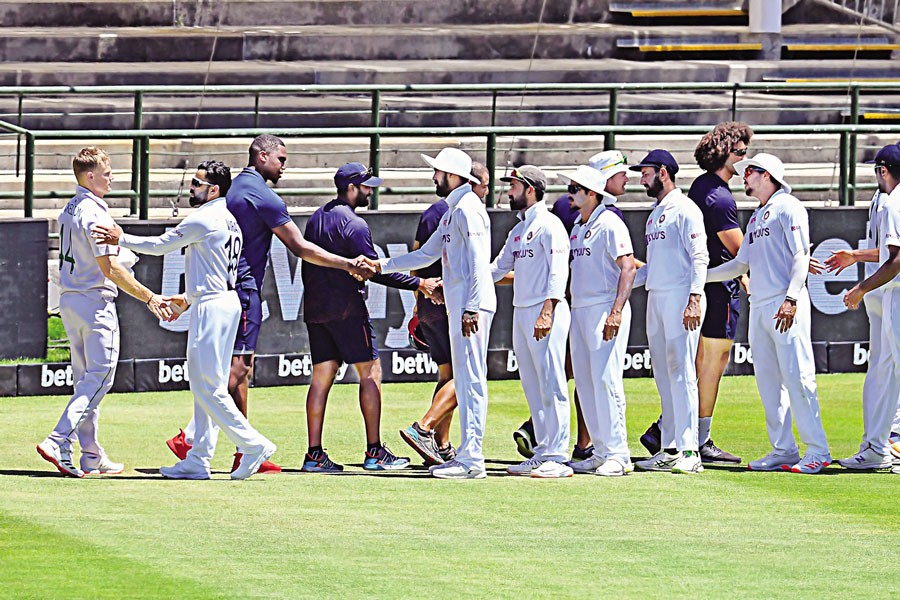 CAPE TOWN, Jan 14 (AFP): Keegan Petersen hit 82 and set up a series win for South Africa on the fourth day of the third Test against India at Newlands on Friday.

It was a remarkable comeback by an inexperienced South African team, who were outplayed in the first Test in Centurion but came back strongly to win the next two matches despite losing the toss and having to bat last in all three matches.

It was a tense chase before lunch on Friday, with South Africa having to work for almost every run after being set to make 212 on a pitch which gave assistance to the fast bowlers.

Petersen, on 59, survived a straightforward chance to Cheteshwar Pujara at first slip off Jasprit Bumrah in the seventh over of the day.

Petersen went on to add 23 more valuable runs as he and Rassie van der Dussen (41 not out) put on 54 runs after resuming at the overnight 101 for two.

South Africa reached lunch on 171 for three and the Indians seemed resigned to their fate as the remaining 41 runs were scored at better than a run a minute.

Van der Dussen and Temba Bavuma (32 not out) took South Africa to victory with an unbeaten stand of 57.

Bumrah and Mohammed Shami both beat the bat several times at the start of the day but it was the lesser pace of Shardul Thakur that brought a breakthrough when Petersen chopped on to his stumps with 57 runs still needed.

The series was dominated by fast bowlers with the South African trio of Kagiso Rabada (20), Marco Jansen (19) and Lungi Ngidi (15) heading the wicket-takers, all conceding fewer than 209 runs a wicket.