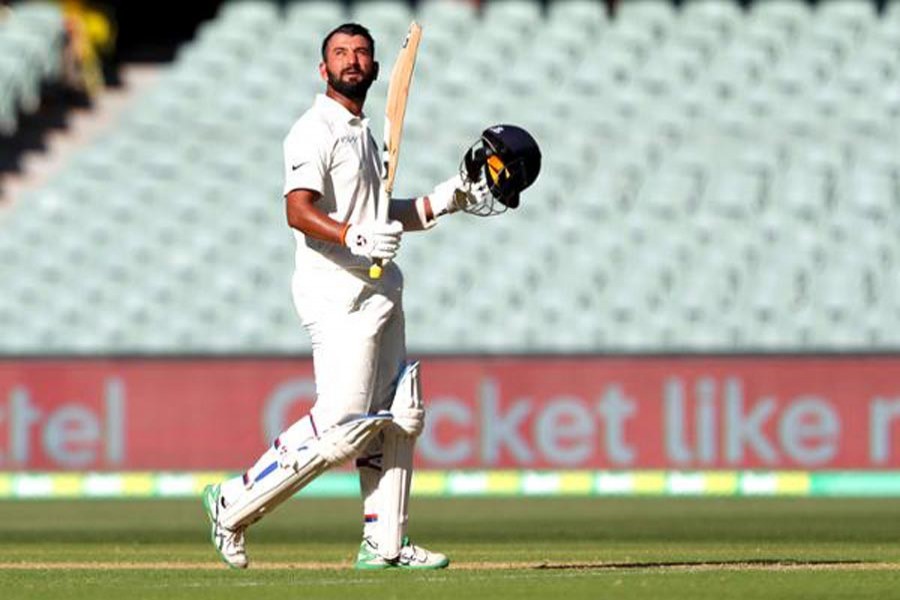 ADELAIDE, Australia, Dec 06 (AFP): Cheteshwar Pujara scored a gritty 123 in punishing conditions to claw India back into the opening Test in Adelaide on Thursday after Australia seized early control with some blistering bowling.

Nathan Lyon, Pat Cummins, Josh Hazlewood and Mitchell Starc all grabbed two wickets each as temperatures topped 36 Celsius (96.8 Fahrenheit) and the tourists wilted to 250-9 at stumps on day one.

The experienced Pujara faced 246 balls in his gutsy knock -- passing 5,000 Test runs for his 16th Test century -- as the wickets tumbled around him, including superstar captain Virat Kohli for three.

At the end of a day characterised by poor shot selection, Pujara went for a quick single on the second last ball and was removed in a brilliant run-out by a diving Cummins.

Batting after Kohli won the toss, the visitors crumbled in a disastrous morning session under a pace barrage before digging in later in the day with Pujara and Ravi Ashwin (25 off 76 balls) staging a fightback as the bowlers tired.

In their first home Test since the ball-tampering scandal in March, Australia took four wickets before lunch with the batsmen guilty of playing at deliveries they would have been better off leaving alone.

Australian bowling coach David Saker said it was a premeditated plan for the quicks to pitch it up and lure India's batsmen into false shots.

"We got the wickets the way we thought we might get the wickets," he told the Seven Network.

Opener KL Rahul, who has been struggling for runs, flopped again, caught by Aaron Finch at third slip off Hazlewood for two.

Veteran Murali Vijay, in the side after young gun Prithvi Shaw suffered ankle ligament damage, didn't last much longer, caught behind by skipper Tim Paine off Starc for 11.

In marched Kohli to a huge roar from the crowd, but Usman Khawaja at gully spectacularly caught him off a Cummins delivery as he attempted a drive, out after facing only 16 balls.