Three defeats in a row for Mohammedan 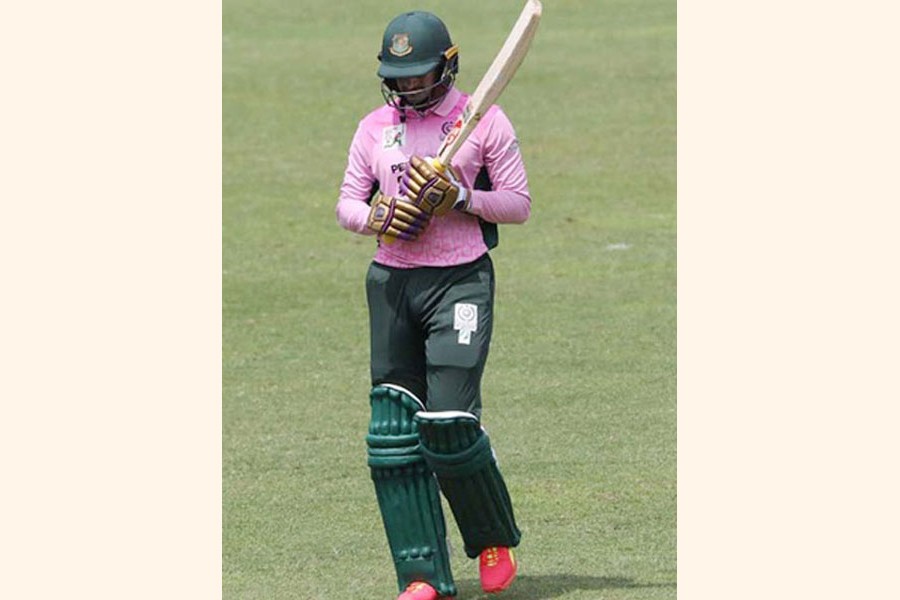 Mohammedan Sporting Club captain Shakib Al Hasan walks off dejected after getting out for a duck against Legends of Rupganj in the DPL at the Sher-e-Bangla National Cricket Stadium in the city on Thursday — bdnews24.com

Before this game, Mohammedan lost to Prime Doleshwar Sporting Club and Sheikh Jamal Dhanmondi Club by 22 and 16 runs respectively.

On Thursday, Mohammedan won the toss and opted to bat first, but their batsmen failed to impress with the bat as they tumbled for 113 runs for nine wickets in 20 overs.

Shuvagata Hom was the highest run-getter scoring 52 off 32 balls with five sixes and one four while Abu Hider and Parvez Hossain Emon were the only two other batsmen to have reached double-digit scores of 15 and 10 respectively.

For Rupganj, Sohag Gazi was the best bowler who bowled four overs and conceded only eight runs to take two wickets. Gazi failed to grab any wicket in the last five matches. Along with him, Mohammad Shahid, Naim Islam and Qazi Onik also bagged two wickets each.

In reply, Rupganj chased down the target in 18.1 overs riding on the fifty of Pinak Ghosh, 51 off 51 with five fours and one six, who was playing only his second T20. Mehedi Maruf also played well scoring 41 off 46 balls.

Mohammedan captain Shakib Al Hasan suffered a duck in this game, which his second in the season. The southpaw having a real bad patch in this league with the bat.

In other games of the day, Prime Bank Cricket Club beat Prime Doleshwar Sporting Club by only three runs, while Gazi Group Cricketers beat Old DOHS Sports Club by six wickets. Mohammad Mithun won the player of the match award for his second fifty of the season for Prime Bank while Mahmudul Hasan Joy also won the award for his 55-ball 85 for Old DOHS, however, his team ended up losing the game.