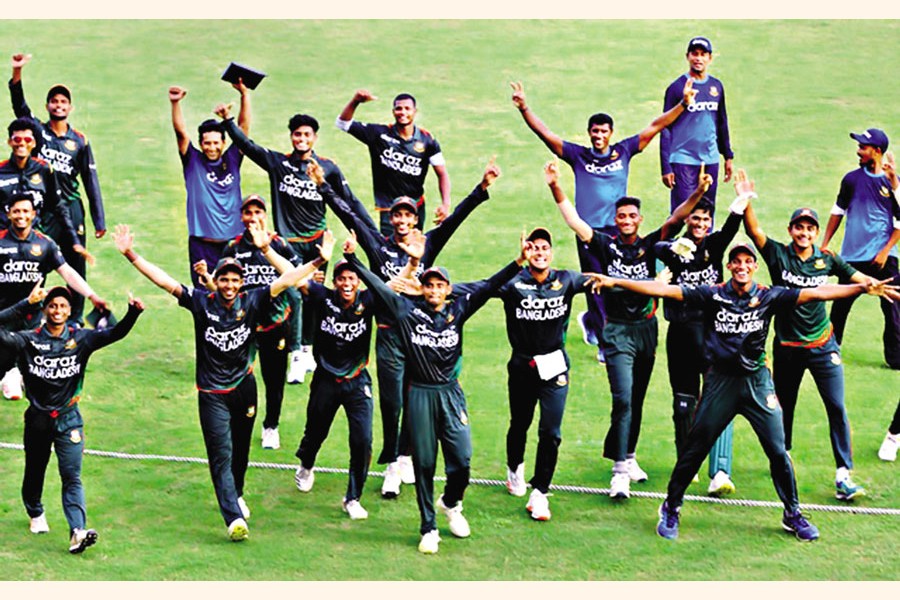 Cricketers of Bangladesh U-19 team celebrating after beating Afghanistan U-19 team in the 3rd match at Sylhet International Cricket Stadium in Sylhet on Tuesday — bdnews24.com

A brilliant century by Aich Mollah guided Bangladesh U-19 team to clinch the five-match Youth ODI Series 3-0 crushing Afghanistan U-19 team by a massive 121 runs in the 3rd match at Sylhet International Cricket Stadium on Tuesday, reports UNB.

Earlier, the Young Tigers took a 1-0 lead in the five-match series beating Afghanistan team by 16 runs in the first match and consolidated their claim to win the series beating the visitors by three wickets with 161 balls to spare in the 2nd match on Sunday

Bangladesh team will play the remaining two Youth ODI matches on September 17 and 19, both at the Sylhet International Cricket Stadium and will play one-off Youth Test from September 22-25 at the same venue.

The young Tigers earned the feat following the footprints of their seniors, who smartly won two consecutive T20 series against mighty Australia and New Zealnad on home soil very recently.

In the day's match, Bangladesh opted to bat first after winning the toss and piled up a comfortable 222 runs for 6 in stipulated 50 overs, featuring 61 runs in the 3rd wicket stand by Aich Mollah and Mofizul Islam.

The 19-year-old right hand batsman Aich Mollah came to bat on number four, hammered a century scoring 108 runs off 130 balls, hitting eight fours and four sixes and was adjudged man of the match.

Chasing a huge target of 223 runs, touring Afghanistan youth team were bundled out cheaply for 101 runs in 39.4 overs to concede an embrasing defeat .Among the Afghans, Bilal Sayedi (22), Ijaz Ahmed (21), Sulaiman Safi (18) and Zahidullah Salimi (13) were the notable batsmen reaching the double digit.

Bangladeshi slow left arm orthodox bowler Naimur Rahman made the major damage in Afghan innings grabbing five wickets, conceding only 17 runs in his 7.4 over spell with a maiden.