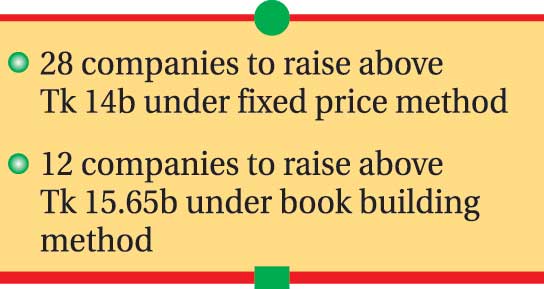 Some 40 companies will raise an aggregate amount of capital worth around Tk 30 billion from the country's capital markets.

The companies have intended to raise the capital floating IPOs (initial public offerings) under the book building and fixed price method to expand their business capacities.

Besides, many of the companies will also repay bank loans with the funds to be raised from the capital market.

Of the companies, 28 are expecting to raise an aggregate amount of capital worth above Tk 14 billion under the fixed price method.

And the remaining 12 companies are working to complete relevant processes to raise above Tk 15.65 billion under the book building method.

Of these companies, Delta Hospital has recently conducted price bidding required to sales shares to eligible investors (EIs) but the cut-off price of the shares is yet to be declared.

Of other companies, Lub-rref (Bangladesh) has also moved to raise Tk 1.5 billion and Mir Akhter Hossain Tk 1.25 billion under the book building method.

Walton Hi-Tech Industries has almost completed the process of raising capital worth Tk 1.0 billion under the book building method.

After the conducting the bidding, the cut-off price has been fixed at Tk 315 each and the value of the shares to be allotted to the EIs stood at above Tk 609.65 million, of which above Tk 595.86 million is the premium which will come from over 1.37 million shares.

Now, the company is awaiting the regulatory approval to its IPO proposal to raise remaining Tk 390.35 million from the general public.

Of other companies, Robi Axiata has already signed an agreement with IDLC Investment to raise around Tk 5.0 billion under the fixed price method.

The securities regulator recently has approved the IPO proposal of Express Insurance whose public subscription is set to start on April 13 and close on April 20.