22nd anniversary of the bank 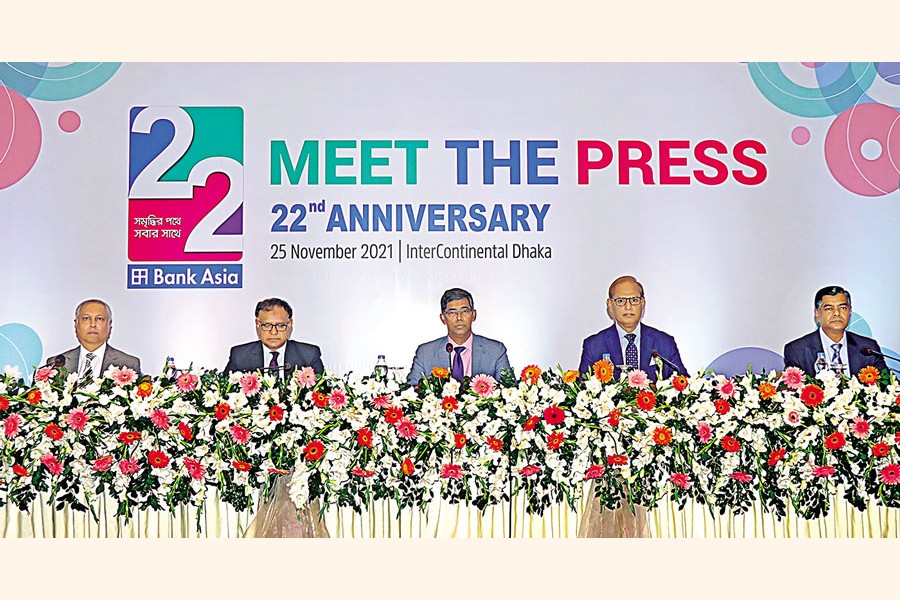 Bank Asia Limited organised a 'Meet the Press' on the occasion of the bank's 22nd anniversary at a city hotel on Thursday. Md. Arfan Ali, President & Managing Director of Bank Asia, was present at the programme.

Bank Asia Limited has committed to expand its agent banking activities in each village of Bangladesh by 2025 aiming to bring more unbanked people in the banking network, the bank's top executive said.

"We want to expedite our agent banking operations to facilitate the ongoing financial inclusion initiatives for ensuring sustainable development of Bangladesh," Md. Arfan Ali, president and managing director of Bank Asia, said while sharing his future plans at a press meet programme on Thursday.

As part of the moves, the leading private commercial bank (PCB) has planned to extend loan facilities to 500 clients each working day using its agent banking network in 2022 instead of the existing level of 250-300 clients.

The maximum ceiling of such loan has been fixed at Tk 0.50 million, according to the MD.

He also said Bank Asia has planned to use agent banking network along with branches to provide loans to micro, small & medium enterprises (MSME) and marginal people across the country.

The PCB has also decided to diversify its investment portfolios focusing retail and small and medium enterprises (SME) instead of corporate one in the next five years.

"Actually, we are working to re-fix the ratio of investment in retail and SME sectors and corporate entities at 50:50 within the next five years," Mr Ali told the FE after the press meet.

The third generation PCB organized the press meet programme at a city hotel on the day just two days before the bank's 22nd anniversary.

Bank Asia started its journey on November 27, 1999 to materialise the dream of a group of successful and renowned entrepreneurs of the country with a mission to assist in bringing high quality service to the customers and to participate in the growth and expansion of national economy, the MD noted.

"Our vision is to build a society where human dignity and human rights receive the highest consideration along with reduction of poverty," he explained.

Since its inception, Bank Asia has dedicated itself to meet the financial needs of the people through innovative customer service and diversified financial services, he added.

As part of the vision, Bank Asia is set to launch two innovative services -Voice Banking and Eurogiro - by the end of this calendar year to bring more unbanked people in the banking network.

He also said such Voice Banking will run without internet connectivity.

On the other hand, Bank Asia is going to introduce Eurogiro services, a cross border payment system, by the end of this calendar year to expedite inward remittance services across the country with using Postal Pay Apps.

The payment system will work through two Apps, Mr Ali said, adding that one app will hold beneficiary and another will be used by remitters.

More than 60 of country's banks, financial institutions and postal offices are now members of the payment system, according to Mr Ali.

"We will be able to provide remittance services to the beneficiaries very shortly through using the payment platform," the MD explained.

Actually, the Eurogiro financial supermarket is the next-generation open payment platform that empowers postal organisations to actively engage in financial services, both locally and globally.

In 2014, Bank Asia introduced agent banking services for the first time in Bangladesh aiming to help minimise the social inequality through empowering particularly the small and vulnerable income groups across the country.

Bank Asia has already been able to collect more than Tk 31.71 billion so far as low-cost deposit mostly from rural people through setting up nearly 5000 agent banking points across the country.

Currently, Bank Asia serves a large customer base comprising individuals and institutions through a network of 129 branches across the country.

Besides, the PCB is providing services to the clients through around 45,000 micro-merchant points at different parts of Bangladesh.