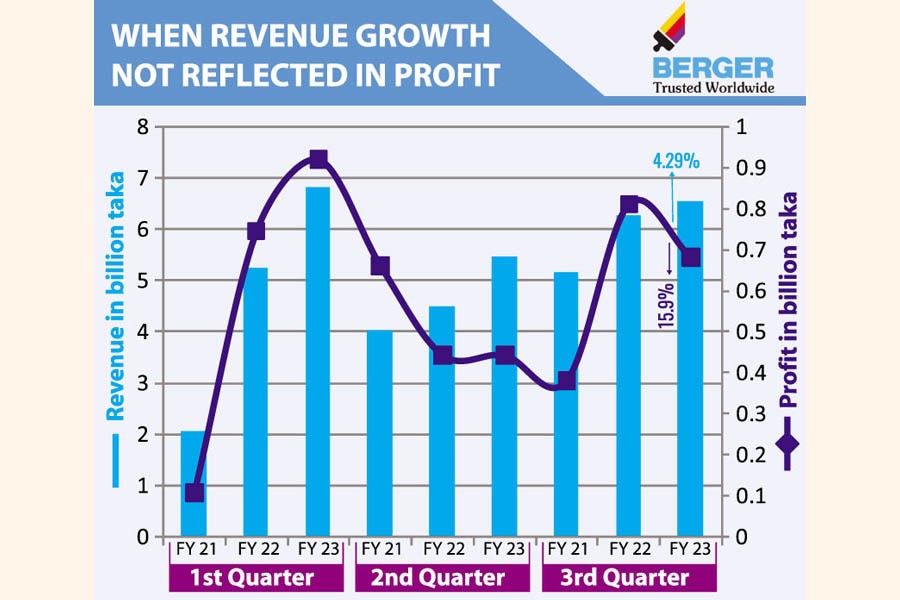 Berger Paints reported a 15.9 per cent year-on-year fall in profit in the third quarter of the FY23 ended in December despite a 4.29 per cent revenue growth during the time.

It saw its profit slide a bit at 0.09 per cent year-on-year in the previous quarter as well.

The company said its profit had shrunk as raw materials became pricier.

It seems the cost hike dug deeper into the profit in Q3 of the FY23.

The consolidated earnings per share (EPS) declined 16 per cent to Tk 14.72 for the October-December quarter of the FY23, compared to the same quarter a year ago.

In disclosures, the company explained that the cost of raw materials had gone so high against the currency devaluation that the revenue growth was not reflected in profits.

The consolidated EPS for the nine months through December 2022, however, advanced marginally to Tk 44.16 from Tk 43.18 for the same period of the previous year.

Ms Rupali Chowdhury, managing director of Berger Paints Bangladesh, said the company was supposed to see a good bottom line growth because of the rise in top line growth.

"But the significant devaluation of the local currency and excess payments for L/C opening did not help the company see the bottom line growth at the expected level."

The company could not increase the product price in tandem with the currency devaluation, said Ms Chowdhury.

"The company increased price a little bit but it was not enough to overcome the gap created by the currency devaluation."

The company witnessed a steep fall in the net operating cash flow per share for April-December of the FY23, compared to the same period of the previous year.

The NOCFPS plunged 76 per cent to Tk 6.23 for the period, compared to what was a year ago.

It fell mainly due to an increase in payments to the suppliers for strategic inventory built-up, advance payments made to bank for opening letters of credit, and a higher payment of advance income tax at import stage, according to a disclosure.

Berger Paints Bangladesh, presently an 'A' category company, was listed on the bourses in 2006.

The share price of Berger Paints Bangladesh dropped 5.43 per cent between September 1 and October 17, 2022 on the Dhaka Stock Exchange (DSE) to the floor price of Tk 1711.60 each.

The stock traded at the same price until the end of November 2022.

The share price rose marginally and closed at Tk 1,723.60 each on Wednesday.

The company's sponsor-directors hold 95 per cent shares, institutes 3.70 per cent, foreigners 0.20 per cent and individual investors 1.10 per cent, according to data available until the end of 2022.