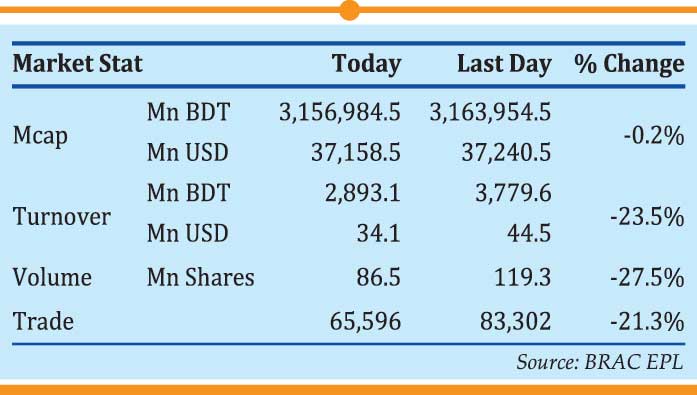 Stocks extended the losing streak for the second day in a row on Tuesday as risk-averse investors continued to gain some profits on major sectors' issues amid ongoing pandemic.

The market opened on positive note, but after first half the prime index reversed the trend which continued till the end as the shaky investors liquidated their holdings from most of the major sectors.

Market analysts said cautious investors continued their profit booking sell-offs as many investors remained worried about the adverse impact of the pandemic on the macro-economic indicators of the country.

Turnover, another important indicator of the market, came down to Tk 2.89 billion on the country's prime bourse, which was nearly 24 per cent lower than the previous day's turnover of Tk 3.78 billion.

Block trade contributed Tk 390 million to the day's total turnover where 50 companies' shares were traded on the block trade board.

Lack of institutional buyers coupled with the current floor price mechanism is preventing many investors from selling shares, said a leading broker.

Most of the shares remained stuck at the trading. Of the issues traded, 184 remained unchanged while 43 issues advanced and 120 declined on the DSE floor.

Most of the major sectors suffered losses while optimistic investors took position on general insurance and textile sectors.

A total number of 65,596 trades were executed in the day's trading session with a trading volume of 86.45 million shares and mutual fund units.

The market-cap on the premier bourse also fell to Tk 3,156 billion on Tuesday, from Tk 3,163 billion in the previous session.

Republic Insurance was the day's best performer, posting a gain of 9.90 per cent while City Bank was the worst loser, losing 6.89 per cent.

The Chittagong Stock Exchange also drifted lower with its All Shares Price Index (CASPI)-losing 5.53 points to close at 11,601 and the Selective Categories Index - CSCX -falling 2.64 points to finish at 7,031.

Of the issues traded, 41 gained, 61 declined and 88 remained unchanged on the CSE.