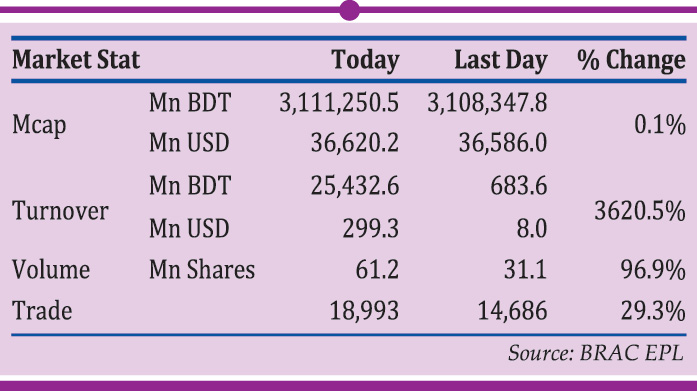 Daily trade turnover on Dhaka Stock Exchange (DSE) crossed Tk 25 billion-mark on Sunday after nine and a half years, thanks to block transaction worth Tk 22.25 billion of GlaxoSmithKline (GSK) Bangladesh shares.

Turnover, a crucial indicator of the market, stood at Tk 25.43 billion on the country's premier bourse which was Tk 683 million in the previous session.

It happens to be the biggest single-day transaction in the past nine and a half years since December 6, 2010, when the turnover totaled a record Tk 27.10 billion.

Market operators said the sudden jump in turnover came as a surprise for capital market investors amid the prolonged bearish trend in the market.

"Sales of entire shares of SETFIRST Ltd, one of the corporate directors of the GSK Bangladesh, to Unilever Overseas Holdings B.V on block market at Tk 2,046.30 each, was the main reason behind the sudden jump in turnover on DSE," said a merchant banker.

The GSK Bangladesh accounted for 87.9 per cent to the day's total turnover as 10.87 million shares of the company worth Tk 22.25 billion changing hands in the block market.

"As per the earlier disclosure, shares transaction of GSK Bangladesh executed on Sunday on the block market through City Brokerage, maintaining all rules and regulations," said a high official of the GSK Bangladesh.

On June 25, SETFIRST Ltd, one of the corporate directors of the GSK Bangladesh, expressed its intention to sell its entire holding (more than 9.87 million shares) of the company at prevailing market price in block market.

As per the disclosure, Unilever Overseas Holdings B.V. purchased the entire holding of SETFIRST Ltd, which is more than 9.87 million or 81.98 per cent shares of the total number of shares of GSK Bangladesh.

The GSK, one of the worlds's leading research-based pharmaceutical and healthcare companies, shut its medicine manufacturing unit in Bangladesh in 2018 after six decades of operation due to incurring huge losses.

The UK-based multinational company continued with its consumer healthcare unit that produces Horlicks, Sensodyne and Glaxose-D in Bangladesh as the company makes a healthy profit from this segment.

GSK Bangladesh, which was listed on the Dhaka bourse in 1976, made a Tk 986 million net profit in 2019 thanks to closure of its unprofitable pharmaceuticals business in Bangladesh.

United Power Generation & Distribution Company also contributed 8.70 per cent to the total day's turnover as 10 million shares of the company worth Tk 2.20 billion were traded on the block mark on Sunday.

"The turnover stood at Tk 25.43 billion, the highest since December 6, 2010 thanks to the huge block transactions of GSK Bangladesh and United Power which contributed 87.9 per cent and 8.7 per cent respectively to the total trade," commented International Leasing Securities.

A block trade is an order of trade submitted for the sale or purchase of a large quantity of securities at an arranged price between two parties.

Along with huge turnover, DSEX, the key index of the DSE, went up by 4.94 points or 0.12 per cent to settle at 3,974 during the three-hour trading session.

Most of the shares, however, remained stuck at the trading floor amid floor price limitation. Of the issues traded, 235 remained unchanged while 44 issues advanced and 12 declined on the DSE floor.

DSEX, the key index of the Dhaka Stock Exchange, went up by 4.94 points or 0.12 per cent to settle at 3,974 during the three-hour trading session.

The core index added 12 points in the past four consecutive sessions.

Meanwhile, a group of investors staged demonstration and formed a human chain in front of Crest Securities Ltd, a brokerage firm of the DSE, as its owner went into hiding after embezzling clients' money.

A number of investors complained that the directors of the brokerage firm sold off their (investors) shares without informing them and left the country.

The prime bourse has suspended its depository participant account and also requested the Bangladesh Bank to freeze bank accounts of the company and its directors.

Most of the shares remained stuck at the trading floor amid floor price limitation. Of the issues traded, 235 remained unchanged while 44 issues advanced and 12 declined on the DSE floor.

A total number of 18,993 trades were executed in the day's trading session with a trading volume of 61.18 million shares and mutual fund units.

The market-cap on the premier bourse rose to Tk 3,111 billion on Sunday, from Tk 3,108 billion in the previous session.

Paramount Insurance was the day's best performer, posting a gain of 4.27 per cent while Exim Bank was the worst loser, losing 2.52 per cent.

The Chittagong Stock Exchange also edged higher with its All Shares Price Index (CASPI)-advancing 22 points to close at 11,284 and the Selective Categories Index - CSCX -gaining 12 points to finish at 6,830.

Of the issues traded, 29 gained, 9 declined and 99 remained unchanged on the CSE. The port city bourse traded 14.96 million shares and mutual fund units.