Foreign investors' sales volumes have been much higher than buy volumes in the stock market in the six months through September, indicating their intention to pull out of the market.

The depreciation of the taka against the dollar portrayed a bleak picture of future returns from stocks as the translated income will be lower than earlier even if stocks maintain a price rise. The market volatility only added to the grim outlook.

Md Moniruzzaman, managing director at IDLC Investments, said foreign investors had continued pulling out their investments from the frontier markets, including that of Bangladesh, to reduce their investment risks amid worries over the foreign exchange reserves and the market volatility.

As the possibility of good returns from Dhaka stocks has dwindled, US treasury bonds began paying higher interest rates. The private bonds in the US followed suit, driving funds to the developed economy from other markets. 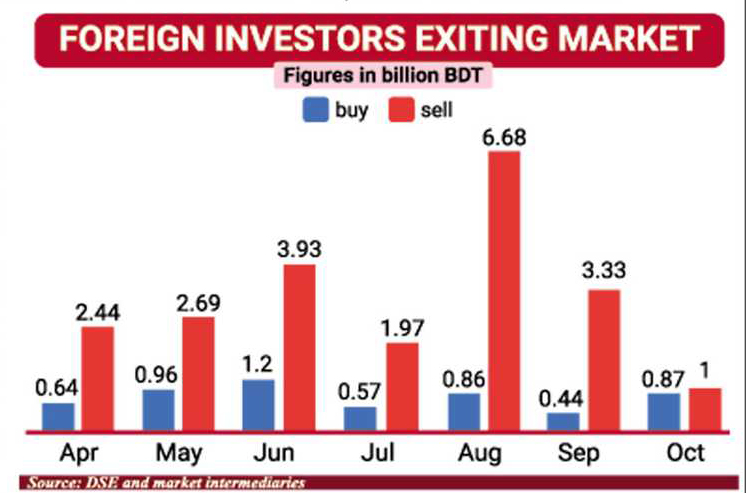 The benchmark 10-year US Treasury note yielded just 1.5 per cent at the end of 2021, which gradually increased this year to 4 per cent in October.

"There is no conversion risks in the investments made in their own countries," said an official of the LankaBangla Securities.

In such a scenario, good stocks on the Dhaka and Chittagong bourses also suffered erosion of investments.

One of the most transparent and profit-making listed banks, BRAC Bank saw its foreign stake shrink to 34.10 per cent from 37.88 per cent in the 10 months through October.

Small-cap companies had significant erosion in foreign stakes. In some cases, the stake has fallen to zero. For example, ML Dyeing lost its 19.52 per cent foreign stake altogether in just four months to the end of October.

Foreign investors have brought down their stake in VFS Thread Dyeing from 18.30 per cent to only 0.12 per cent from June last year to October this year.

According to IDLC Finance, the foreign share of the Dhaka Stock Exchange hovered between 4.2 per cent and 6.8 per cent from 2015 to 2021. The stake dropped to 3.9 per cent in June this year against the backdrop of a significant fall of the market.

The liquidation of some assets at the end of their tenure was also another reason behind the decline in overseas funds, said Ahsanur Rahman, chief executive officer at BRAC EPL Stock Brokerage.

Sales by overseas investors, however, slowed down in October as most of the stocks got stuck at the floor.

The price movement restriction is another reason why foreign investors feel discouraged to inject fresh funds into the capital market, insiders say.

Foreign investors look at fundamentals of a company before investing and that helps the market determine prices of stocks based on their strength.

In doing so, the investors always seek help from local research institutes, thus encouraging better analysis of stocks and their performance in the market.

But, in some cases, frontier markets do not have the capacity to handle aggressive foreign sales due to their insufficient institutional capacity.

As a result, the markets' decline escalates amid mounting selling pressure.

Recently, fresh investments have started to come in as the stocks on the Dhaka bourse are almost at their lowest level due to the long episode of price erosion.

"They [foreign investors] try to adjust their portfolios when the market is downward and recently some of our clients placed fresh buy orders," said a senior official of the LankaBangla Securities.