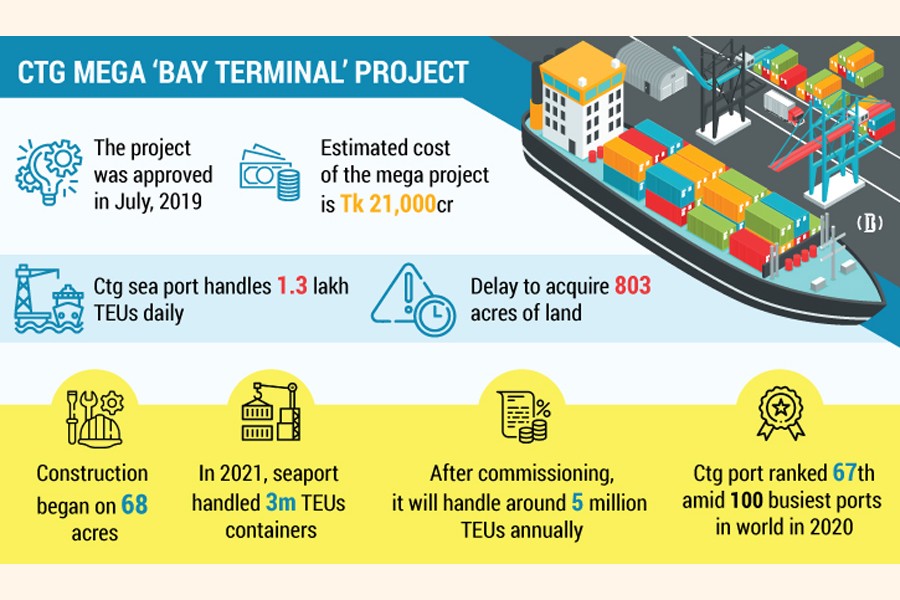 The Republic of Korea (ROK)'s joint venture companies were appointed as consultant for the Bay Terminal project in April this year. They have also been tasked with crafting the master plan and making design of the Bay Terminal. They would get Tk 1.1 billion for the task, officials at the CPA said.

The CPA is the implementing authority of the project being implemented on over 900 acres of land on the port city's Patenga coastline.

CPA Chairman Rear Admiral M Shahjahan said the construction of the main Bay Terminal will begin in January next and is expected to be completed in 2025.

Addressing a views-exchange meeting with other stakeholders and senior journalists on the Bay Terminal's master plan at CPA hall today, Mr Shahjahan said the CPA was all set to kick off the construction work in January 2023.

Noting that the Bay Terminal project taken in 2016, he said, all other preparations had already been done, including feasibility study, site selection, land acquisition and appointment of an internationally reputed consulting firm for crafting the master plan and design had already been completed.

Once built and made operational, the Bay terminal will substantially boost the Chittagong Port's container handling capacity.

At present, the Chittagong Port can handle containers equivalent to a total of 3.1 million TEUs (twenty-foot equivalent unit) a year. Once completed, the Bay Terminal will handle an additional 19 TEU's of containers, increasing the seaport's total handling capacity to 5 million TEUs, CPA officials said.

They said the Bay Terminal is also expected to contribute 2 to 3 per cent to the growth of the national economy.

Talking with the journalists, Mr Shahjahan said of the total land, the local administration had handed over 68 acres to the CPA in October last year to implement the project. He disclosed that the CPA had requested the authority to lease the land at a nominal price.

They made the master plan, including detailed engineering design, drawing and making the estimation of constructing the multipurpose terminal, he also said. The South Korean joint venture will also supervise the construction of the Bay Terminal he informed.

After going into full operation, ships with a draft of 10-12 metres and carrying a maximum 6,000 TEUs will berth at the multipurpose terminal, he added.

Sources at both the CPA and the ministry concerned said, Bay Terminal, a fast-track project, will be equipped with most modern cargo-handling cranes and tools and it will facilitate berthing of vessels with more length and draft at the port's jetties for quick loading and unloading of cargoes. It will also immensely reduce goods transportation costs and bring dynamism to overall activities of the port, they said.