The Dhaka bourse on Sunday closed marginally lower due to price corrections witnessed by the major sectors.

On the day, most of the major sectors declined marginally on the Dhaka Stock Exchange (DSE). 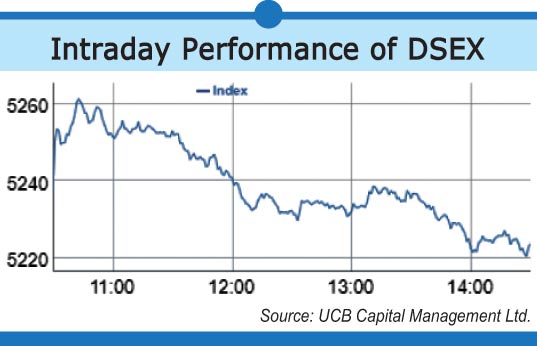 Later, the DSEX continued its declining trend till mid session amid price corrections witnessed by the major sectors.

Before closing the session, a weak recovery stance was observed but the DSEX failed to recover the initial loss.

"The price correction of some large cap stocks like GP, BATBC and UPGDCL were the main constituents of the day's market correction," said a market review of EBL Securities.

The share price of British American Tobacco Bangladesh Company declined 1.3 per cent or Tk 15.60 to close at Tk 1189.80 each.

At the end of the session, the turnover stood at above Tk 4.68 billion which was 2.08 per cent less than the turnover of the previous session.

Of the sectors which advanced, jute witnessed 0.9 per cent price appreciation, services & real estate 0.8 per cent and travel & leisure 1.0 per cent.

Investors' participation was concentrated mostly on pharmaceuticals & chemicals which grabbed 19.50 per cent of the market turnover followed by engineering 15.80 per cent, textile 13.10 per cent and fuel & power 8.60 per cent.

KDS Accessories was the number one gainer with a rise of 9.98 per cent to close at Tk 63.90 each.

The turnover stood at above Tk 431.51 million on the port city bourse CSE.