The board of directors of MI Cement Factory Ltd., which produces Crown brand cement, has decided to expand its production capacity, officials said.

The decision was taken at a meeting of the board of directors on Thursday.

As per the decision, the company will set up its 6th cement unit at Muktagachha in Munshiganj at a cost of Tk 6.0 billion.

The new production line with a capacity of 8,400 tonnes per day is expected to go into commercial operation by 2021.

After completion of the new unit, the total production capacity of the company would increase by 76 per cent to 19,400 tonnes per day from 11,000 tonnes. 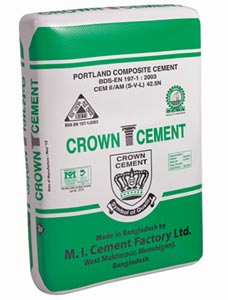 An official of the company said the growing demand for their cement has encouraged its board of directors to expand the production capacity.

The Crown cement has been used in several big infrastructure projects, he said, adding that the brand has also gained traction in northeastern states of India because of its good quality.

The company's paid-up capital is Tk 1.48 billion and authorised capital is Tk 5.0 billion, while the total number of securities is 148.50 million.

The sponsor-directors own 67.08 per cent stake in the company while institutional investors own 17.25 per cent, foreign investors 0.31 per cent and the general public 15.36 per cent as on December 31, 2018, the DSE data show.

The Credit Rating Agency of Bangladesh (CRAB) has assigned the entity rating (surveillance) of 'AA2' to the company along with a stable outlook based on audited financial statements up to June 30, 2018, bank liability position as on November 30, 2018 and other relevant quantitative as well as qualitative information up to the date of rating declaration.

MI Cement Factory is one of the leading cement manufacturers in Bangladesh. The company started its journey on December 31, 1994, with the commitment to providing high quality cement. Its Crown brand cement is well-known both at home and abroad.

Initially, the plant was set up with a capacity of producing 600 tpd (tonne per day) of Portland cement. But the demand for Crown cement continues to rise over time.

Crown Cement pioneered in export of cement in 2003 and paved the way for earning hard-earned foreign currency, according to the company's website.