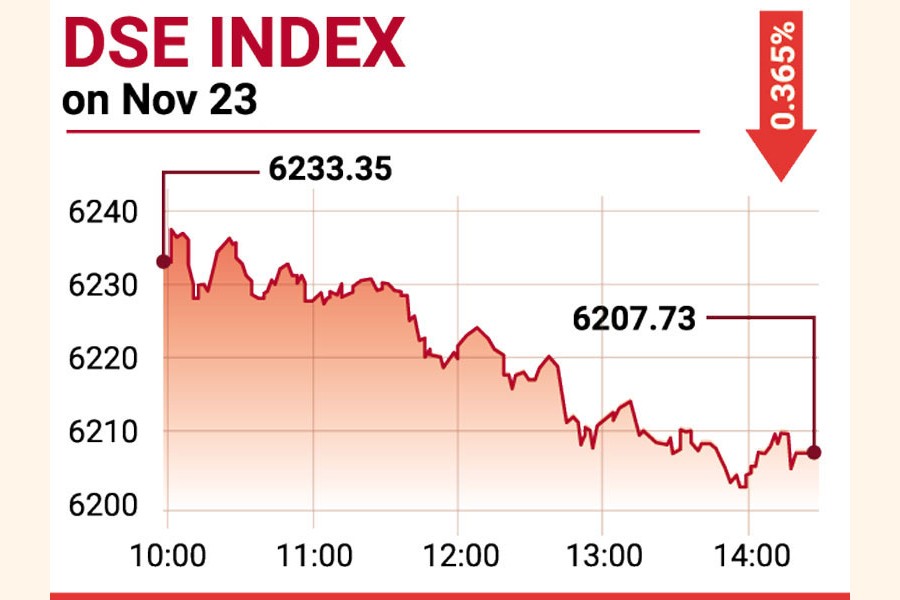 The securities regulator ordered removal of the five-minute pre-opening session from today (Thursday) to shun any negative impression on investors, created by daunting selling pressure during the time.

The session was introduced in November 2020 in order to give a window to investors to decide their moves for the day, aligned with global practices.

The Bangladesh Securities and Exchange Commission observed that the session had let selling orders to pile up even before the trading began, discouraging investors who would like to buy stocks.

"Pre-opening sell orders overly outstripping buy orders created a negative impression [on investors] about the market. That intensified sell-offs when the market was downward. The commission wants to avoid that," said Mohammad Rezaul Karim, spokesperson of the regulatory body.

The move adds to the latest measures by the regulator as it scrambles to rein in the falling market and to keep it up.

The pre- and post-opening sessions were put in place to help determine justified opening and closing prices of the listed securities.

The pre-opening session has been withdrawn for the second time on regulatory instructions, said a DSE official.

"It may be temporary," he added.

Yesterday's market started the day's session with a high selling pressure that refused to cool down until the day's end.

Investors were busy liquidating their holdings on IT, services, travel, life insurance and pharmaceuticals sectors, pushing down the DSEX, said International Leasing Securities.

Of the issues traded, the number of stocks that declined surpassed those that went higher. Only 20 stocks advanced while 63 fell and 230 remained unchanged, which were mostly stuck at the floor.

"Equity indices of the Dhaka bourse failed to extend the upward momentum from the previous session as investors' confidence in taking long-term positions in equities weakened, prompting them to liquidate their portfolios and sit on cash in the absence of a major trigger in the market," said EBL securities.

The stock resumed trading on Wednesday after the one-day break set for deciding the entitlement of dividends declared for the fiscal 2021-22.

Bashundhara Paper Mills declared 10 per cent cash dividend for the year ended in June this year on the back of an impressive 207 per cent jump in earnings per share in the three months through September.

The top-gainer chart for the day was dominated by small-cap companies.

The newly-listed Chartered Life Insurance Company was the top gainer for the day, gaining 9.96 per cent to Tk 59.6.

Navana Pharmaceuticals was also listed as one of the top losers, having lost 6.65 per cent to Tk 87.10 after it broke a five-day spell of declines by rising 9.26 per cent on Tuesday.

Eastern Housing and Orion Infusion also queued up on the top losers' chart on Wednesday.

Investors were particularly active trading stocks in the pharmaceuticals and chemical sectors, leading to their 19.8 percent contribution of the total turnover.

IT sector occupied 17.6 percent of the market turnover, as it endured the highest price corrections - up to 4.3 per cent, followed by the services and real estate sector 2.8 per cent and the travel and leisure sector 2.2 per cent.

"Investor participation has yet to recover across the bourse, as the majority of scrips remain stuck at the floor price, limiting liquidation opportunities in the market," said EBL Securities.

The benchmark index of the Chittagong Stock Exchange lost 76 points or 0.41 per cent to 18340. Of the stocks traded, 19 advanced, 46 went down and 75 remained unchanged.