The net profit of Premier Cement Mills declined moderately for the fiscal year (FY) 2018 compared to previous year due to various reasons including the increased cost of raw materials.

In accordance with the economic growth of the country, the company has also witnessed a stable performance,

"But due to an increase in the cost of raw materials in the international market coupled with unfavourable foreign exchange loss, our cost of sale and operation increased remarkably, and the company's net profit declined," Mr. Haider said in his message in the company's annual report of the FY 2018. 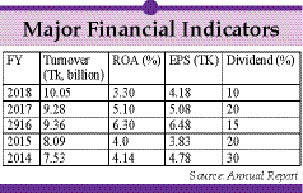 Meanwhile, the Premier Cement Mills has disbursed 10 per cent cash dividend for the year ended on June 30, 2018.

"Sometimes, a cement manufacturer has to sell products at a lower rate due to tough market competition. This competition is one of the reasons behind the decline in net profit amid increased amount of revenue," Mr. Rahman told the FE.

He said recently the price of clinkers declined a little bit and it may leave a positive impact on the company's net profit for April-June, 2019.

A mixed trend was also observed in the percentage of the company's return on asset (ROA), an indicator of how profitable a company is relative to its total assets, reported in last five years.