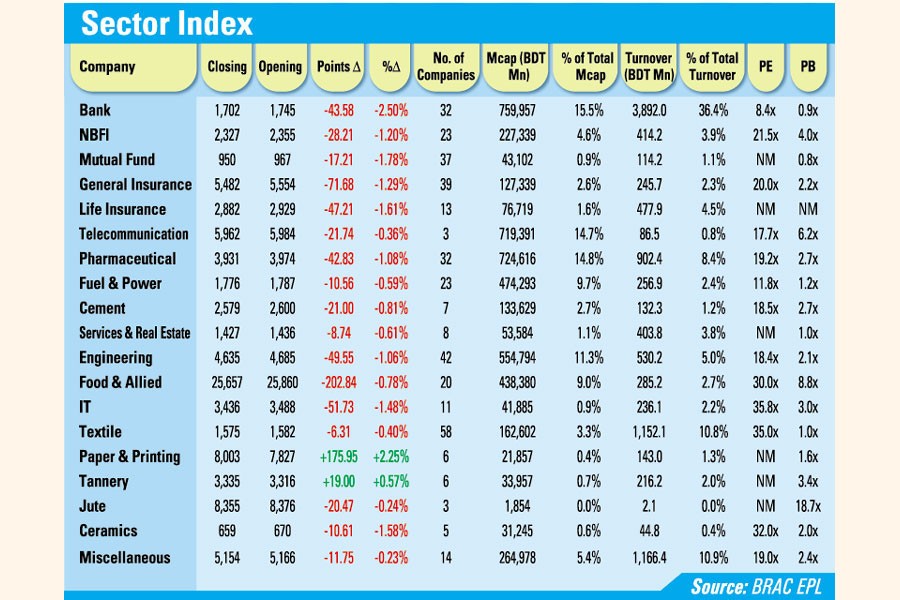 Dhaka bourse saw a straight fall on Wednesday as most of the listed securities including large cap issues lost prices amid selling pressure executed by shaky investors.

On the day, investors' participation also declined and DSEX, broad index of Dhaka Stock Exchange (DSE), went down below 7000 points.

The market opened the day's session positively but soon later the DSEX started to decline and continued the falling trend till closure.

The price correction witnessed by all listed banks intensified the fall of the broad index.

Asked, the president of Bangladesh Merchant Bankers Association (BMBA) Md. Sayadur Rahman said it's difficult to mention about any specific reason behind the corrections observed recently.

"Investors became panicked following the market's down trend and start offloading shares. On the other hand, they arrived at the market with a buying mood following the upward trend of the market," Mr. Rahman said.

According to a market review of EBL Securities, equity indices on the Dhaka bourse were in the doldrums as the market momentum weakened due to the tightening liquidity scenario in the money market.

"Investors were quite shaky and engaged in selling spree in recent market outperforming stocks while correction in banking stocks, the largest market cap shares, aggrieved the situation further," said a market review of EBL Securities.

The premier bourse DSE posted a turnover of Tk 11.29 billion which was 14.08 per cent less than the turnover of previous session.

Of total turnover, Tk 593 million came from transactions executed in block board.

Investors' participation was concentrated mostly on banking sector which grabbed 34.7 per cent followed by textile 10.6 per cent, miscellaneous 10.3 per cent, pharmaceuticals & chemicals 9.8 per cent, and financial institutions 5.6 per cent.

LR Global Bangladesh Mutual Fund One was the worst loser after declining 10 per cent or Tk 0.9 to close at Tk 8.10 each.

Of 285 issues traded, 87 advanced, 171 declined and 27 were unchanged and the port-city bourse CSE posted a turnover of Tk 586 million.