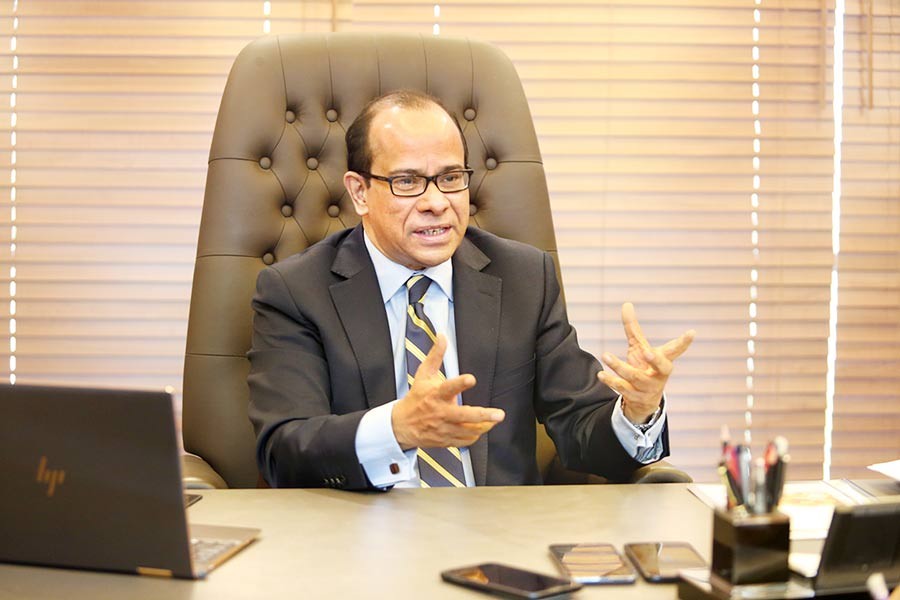 Shimanto Bank Limited has planned to develop a new rural banking model aiming to bring unbanked people particularly from rural areas of Bangladesh into the banking network, the bank's top executive has said.

The bank will formally announce the model shortly, according to the top executive.

The private commercial bank (PCB) also prefers progressive banking instead of aggressive one to ensure its sustainable financial growth in the coming years.

"This is not proper time for aggressive banking mainly due to presence of higher non-performing loans (NPLs) in the country's banking system," the senior banker explained.

Mr. Rahman has a portfolio of 35 years of experience in reputed local and foreign commercial banks. He played a pioneering role in different areas, ranging from retail banking to risk management.

"Actually, we want to develop Shimanto Bank as a techno-centric, advanced and inclusive bank in the country with launching different innovative products and services," the private banker noted.

He also said the bank has already emphasised on financing in micro, small and medium enterprises (MSMEs) to help creating employment opportunities through developing entrepreneurship across the country.

"Our main goal is to contribute for achieving sustainable economic development through providing banking service to the marginal people of the country," Mr. Rahman said while replying to a query.

He also said the bank has already started distribution of loan to farmers through its rural branches directly instead of using NGOs (non-government organisations)-linkage like other PCBs.

The bank, owned by Border Guard Bangladesh (BGB) Welfare Trust, started its journey on September 01, 2016 with a view to build a sound and healthy financial institution which will provide technology-driven customer centric inclusive banking solutions and contribute to the growth of national economy with deep social commitment.

Currently, the bank is running its businesses with 15 branches across the country.

"We've planned to open four new branches in both rural and urban areas by the end of 2019 as part of our business expansion plan," the top executive said while replying to another query.

As part of the plan, Shimanto Bank is now working to launch different products and services including school banking, home loan product and expansion of network for distributing salary of all BGB members countrywide.

"We've also planned to offer collateral free loan to doctors particularly young ones by the end of this calendar year for setting up their business entities," Mr. Rahman added.

"We're developing the rural banking model that will help bringing the people, whose are involved in illegal businesses in the border areas, into normal lives with social dignity," the CEO said while replying to another query.

Most of the banks now face different problems mainly due to weak governance in the country's banking sector while Shimanto Bank is governed by its sound policies and regulations properly.

"There is no interference by the board of directors and it helps us establish good governance in the PCB," the CEO noted.

He also said the SMBL is giving much importance to key parameters of corporate governance such as complete separation of ownership and management, independent board room culture, efficient of board committees, accountability among shareholders, board, the committees and the management, fair financial reporting, disclosure and compliance.

"There are no NPLs in the Shimanto Bank till today," the CEO said while replying to a query relating to the ongoing trend of NPLs in the banking sector.

He also said the country's present NPLs position in the banking industry is a vital concern for all and we need to work out the legal framework to realise these classified loans and also to discourage wilful defaulters in the community like China.

"We've to impose social restrictions on wilful loan defaulters that will help bringing down the amount of NPLs in the banking sector," Mr. Rahman, a career banker recommended.

The private banker also sought strong judiciary support to speed up recovery process of classified loans, saying that it would also help improving financial health of the banks.

"Legal reforms are mandatorily to improve financial health of the country's banking sector," he noted.

"Being a new bank we are struggling in acquiring new deposit due to high interest rate prevailing in the market," he added.

Monitoring and supervision will have to be strengthened to ensure discipline in the country's banking sector, according to the senior banker.

After completing Master Degree in Management from the University of Dhaka, Mr. Rahman joined the City Bank Limited in 1983. After that, he had worked in different foreign and local PCBs including United Commercial Bank Limited, Standard Chartered Bank, Citi NA and Eastern Bank Limited.

Before joining the Shimanto Bank as its first MD and CEO in 2016, he was the founder MD and CEO of NRB Bank Limited.