The earnings per share of Singer Bangladesh Ltd rose 12.50 per cent year-on-year in 2019 thanks to record sales and continued focus on managing operating expenses.

The company has reported consolidated (EPS) of Tk 10.35 for the year ended on December 31, 2019 as against Tk 9.20 in the previous year, according to an official disclosure on Sunday. 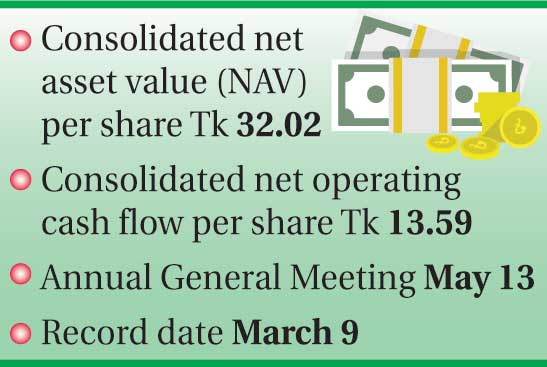 The company's consolidated net operating cash flow per share stood at Tk 13.59 for the year ended on December 31, 2019 as against negative Tk 4.66 for the same period of the previous year.

The board of directors of the company has recommended 77 per cent cash dividend for the year ended on December 31, 2019.

The board has also decided to increase authorised capital to Tk 2.50 billion from existing Tk 1.0 billion, according to the disclosure.

The annual general meeting will be held on May 13 at 10am at Spectra Convention Center in Dhaka. The record date is on March 9.

The company disbursed 30 per cent stock dividend for the year ended on December 31, 2018.

The company's paid-up capital is Tk 997.03 million and authorised capital Tk 1.0 billion while total number of securities is 99.70 billion.

The sponsor-directors own 57 per cent stake in the company, while institutional investors own 19.27 per cent, foreign investors 5.36 per cent and the general public 18.37 per cent as of December 31, 2019, the DSE data showed.

Singer is the largest retailer of consumer durables in Bangladesh, with 384 company owned stores. Singer commenced operation in the region in 1905, being famous for sewing machines and hire purchase finance, according to its website.