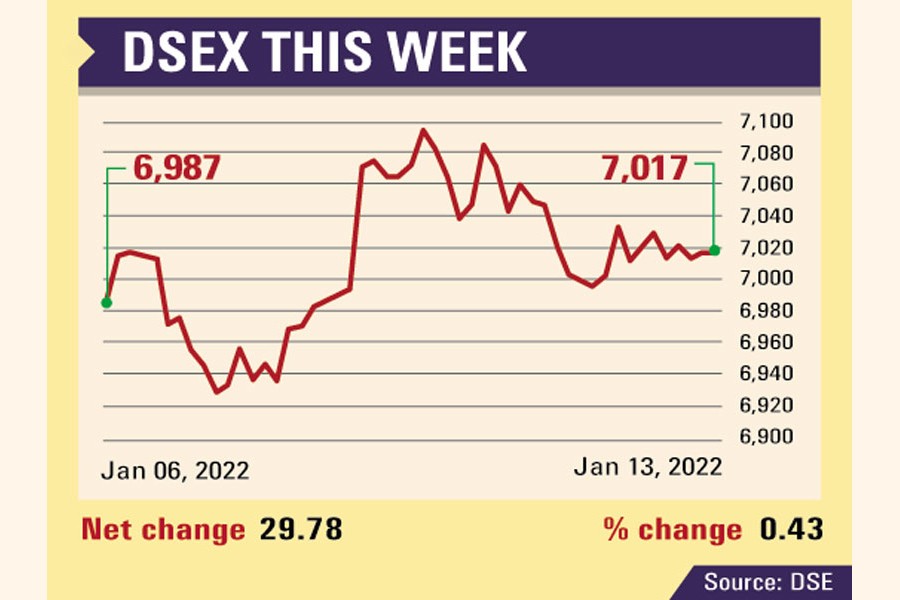 Stocks posted a marginal gain in the outgoing week, extending the winning streak for the third straight week, with investors putting fresh bets on the state-owned listed firms, keeping aside Omicron worries.

Week on week, the benchmark DSEX index of Dhaka Stock Exchange (DSE) climbed 29.78 points or 0.43 per cent to settle at 7,017. The DSEX added 315 points in the past three consecutive weeks.

Of the five trading days in the week, three sessions gained while two other saw corrections.

The week's total turnover stood at Tk 78.32 billion on the prime bourse as against Tk 64.88 billion the previous week.

The daily turnover averaged out at Tk 15.66 billion, up 21 per cent from the previous week's average of Tk 12.97 billion.

Market analysts said the investors, shrugging off worries about the rising Covid-19 cases in the country, continued pouring their funds into large-cap stocks, pushing the stocks higher.

Share price surge of the government-owned listed companies helped the market to close higher, they said.

The investors put their fresh bets on stocks anticipating that the Omicron variant would not be as devastating as previously thought, said a merchant banker.

Market capitalisation of the DSE also jumped 1.25 per cent to Tk 5,649 billion on Thursday, up from Tk 5,580 billion in the week before.

Major sectors posted mixed performances with telecom logging the highest gain of 3.50 per cent, followed by power (3.0 per cent), pharma (1.10 per cent), and engineering (0.30 per cent).

On the other hand, banking, non-bank financial institutions and food sectors suffered losses of 1.30 per cent, 1.0 per cent and 0.20 per cent respectively.

Of the traded issues, 219 issues declined, 146 advanced and 19 remained unchanged on the DSE trading floor.

The Chittagong Stock Exchange (CSE) also ended higher, with the CSE All Share Price Index (CASPI) rising 50.69 points to settle at 20,545 and its Selective Categories Index (CSCX) gaining 32 points to close at 12,342.

Of the issues traded, 203 declined, 124 advanced, and 16 remained unchanged on the CSE trading floor.

Meanwhile, Beximco's Tk 30 billion green sukuk, the first shariah-based green bond in the corporate sector of Bangladesh, made its trading debut on the bourses on Thursday.