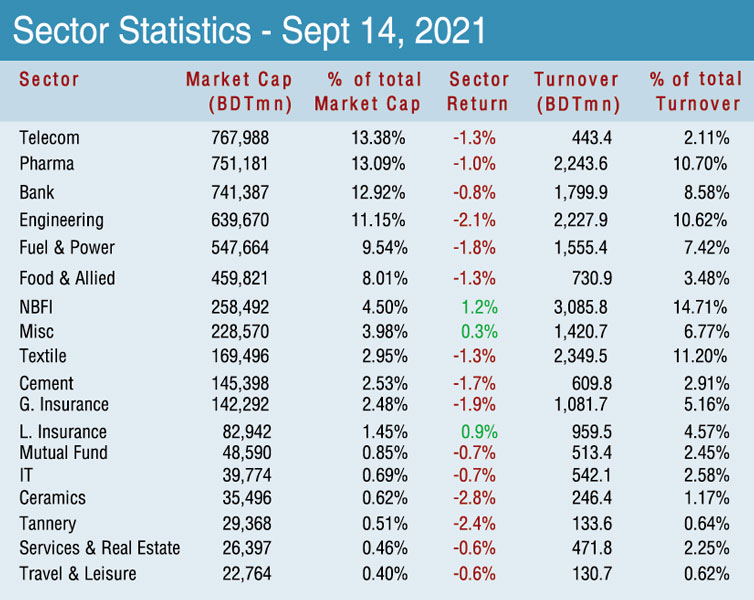 The market opened the day's session positively and soon later the benchmark index of Dhaka Stock Exchange (DSE) failed to sustain and no strong recovery stance was observed till closure.

Market insiders said investors adopted cautious stance following some issues including the news regarding the conflicting stances by the securities regulator and the central bank over the use of unclaimed dividends.

On Monday, in a meeting held among different regulators the central bank said it would not allow the securities regulator to use the unclaimed or undisbursed dividends of banks and non-banking financial institutions by the Capital Market Stabilisation Fund (CMSF).

The market insiders also said the price correction witnessed by some large cap companies including Walton Hi-Tech Industries and Berger Paints Bangladesh also played a role in the decline of index.

The companies' share prices declined as many investors offloaded shares amid the regulatory instruction regarding offloading more shares by those companies.

According to a market review of International Leasing Securities, investors remained watchful and preferred to book profits on Tuesday.

On Tuesday, the DSE featured a turnover of Tk 20.97 billion which was 2.74 per cent higher than the turnover of previous session.

Of total turnover, Tk 524 million came from transactions executed in block board of the premier bourse DSE.

Of the sectors which witnessed price appreciation, financial institutions advanced 1.3 per cent, life insurance 0.9 per cent, and miscellaneous 0.3 per cent.

Investors concentrated mostly on textile sector which grabbed 11.3 per cent of market turnover followed by engineering 1.8 per cent, pharmaceuticals & chemicals 1.7 per cent, and bank 8.6 per cent.