Many investors created buying pressure in the stocks of some sectors following the price correction of previous week. 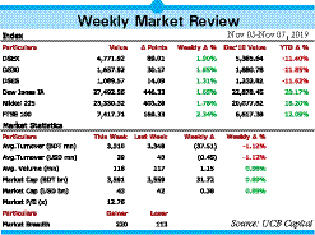 The major sectors such as bank, financial institutions, engineering, and pharmaceuticals observed investors' increased participation and helped the broad index to close higher.

Out of five trading sessions executed in last week, the broad index advanced in four sessions on the Dhaka Stock Exchange (DSE).

The premier bourse closed the week's first session with a marginal rise in DSEX, the core index.

In the following day, the DSEX witnessed correction and closed the remaining three sessions positively.

On Thursday, the market capitalisation stood at above Tk 3.59 trillion on the main bourse with a rise of 0.89 per cent from the closing mark of previous week.

Of the sectors which displayed price appreciation, bank advanced 2.5 per cent, financial institutions 7.0 per cent, engineering 1.8 per cent, life insurance 4.2 per cent, pharmaceuticals & chemicals 0.6 per cent and textile 2.4 per cent.

Of the sectors which witnessed price correction, fuel & power declined 0.3 per cent, miscellaneous 0.1 per cent, tannery 2.8 per cent and telecommunication 1.1 per cent.

Investors mostly focussed on engineering sectors which captured 16.9 per cent of the weekly turnover followed by pharmaceuticals & chemicals 13.5 per cent, textile 12.4 per cent, and bank 11.4 per cent.

Small cap companies dominated the gainers chart and Hakkani Pulp & Paper was the number one gainer with a rise of 35.07 per cent to close at Tk 46.60 each.

Rahim Textile Mills was the week's worst loser after declining 14.62 per cent to close at Tk 249.30 each.

The port city bourse CSE featured a total turnover of above Tk 1.48 billion in five sessions of last week.