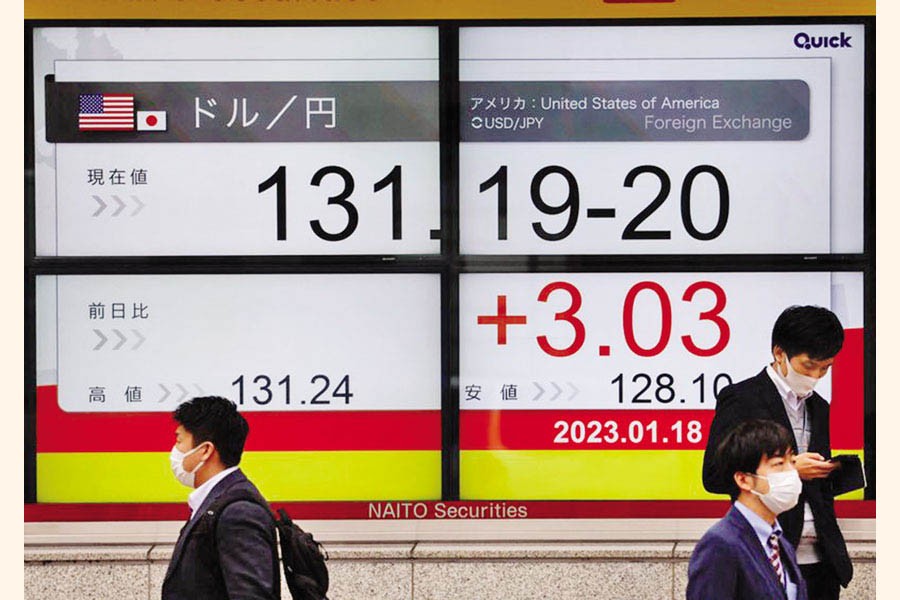 Australia's dollar shot up over 0.7 per cent to its highest in over five months after data showing inflation rose to a 33-year high of 7.8 per cent last quarter bolstered the case for another interest-rate hike from the Reserve Bank of Australia (RBA) next month.

Trade in European stocks was lacklustre and the broad Euro STOXX 600 slipped 0.3 per cent. US stock futures pointed to a soft open for Wall Street.

Globally, stocks have posted strong gains this year after a rout in 2022, on expectations that inflation has peaked and that US interest rate rises will taper off. The dismantling of COVID controls in China and the re-opening of its borders have further boosted investor sentiment.

MSCI's world equity index, up more than 6 per cent this month, was broadly steady near five-month highs on Wednesday.

"Our view is that the move in risk assets is overdone," said Guy Miller, chief market strategist at Zurich Insurance Group.

"Broadly speaking, the problem that we have is that economic conditions are getting worse and the data we are looking at points in that direction."

In Asia, MSCI's broadest index of Asia-Pacific shares outside Japan hit a seven-month high. Trading volume was depressed as Chinese and Taiwan markets were still closed for the Lunar New Year holidays.

Shares in Microsoft gave up most of their 4 per cent gains posted in after-hours trade. The tech titan's better-than-expected results showed some strength in the face of a weak economy but weak revenue growth signalled tougher times for the sector.

Microsoft on Wednesday said it was investigating a networking issue that impacted multiple services.

In currency markets, the Australian dollar surged to $0.7123 after the latest inflation data. Australia's currency has risen almost 2 per cent this week and is poised for its biggest weekly jump in over two months.

Investors sharply narrowed the odds on the RBA lifting its cash rate by a quarter point to 3.35 per cent when it meets on Feb. 7. Previously, some analysts had thought there was a chance the RBA might pause its tightening campaign.

"The RBA is hiking the cash rate by 25 basis points a meeting, and we do not believe this will change," ING analysts said in a note.

The euro was flat at around $1.0887 and holding below recent nine-month peaks.

Germany's Ifo institute said its business climate index rose to 90.2, in line with consensus according to a Reuters poll of analysts and up from 88.6 in December.

The New Zealand dollar fell after New Zealand reported annual inflation of 7.2 per cent in the fourth quarter, below a central bank forecast of 7.5 per cent.

Oil prices edged higher, with Brent crude futures last up 0.4 per cent at $86.46 a barrel after declining 2.3 per cent in the previous session. West Texas Intermediate (WTI) US crude rallied 0.3 per cent to $80.36, after a 1.8 per cent drop on Tuesday.

Gold prices dipped 0.5 per cent to $1,928 per ounce, off a nine-month peak touched in the previous session.