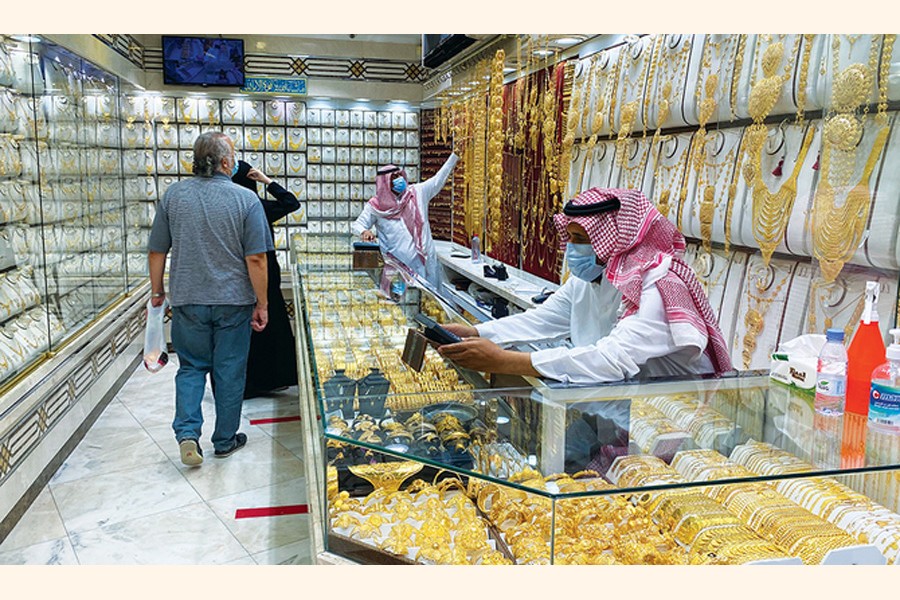 After months of lockdown, customers are back shopping for gold in the jewelers of Riyadh's Diriyah district — AN

BENGALURU, June 30 (Reuters): Gold hovered close to its highest in nearly eight years on Tuesday and was set to post its biggest quarterly gain in over four years as a spike of coronavirus cases fuelled demand for safe havens.

Bullion, with more than 12 per cent gains this quarter, also eyed a third straight monthly gain.

The rise in coronavirus cases in the United States along with the ongoing US-China conflict are "all really pointing towards safe haven gold buying," said Afshin Nabavi, senior vice president at precious metals trader MKS SA.

But most traders are on the sidelines into the end of the month and quarter, and on the technical front, a break above $1,775-80 could prompt a rally toward the $1,800 level, he added.

US states have reversed re-openings and closed businesses to combat a spike in cases, while infections in countries like India and Brazil continued to rise.

Casting further doubts over an economic recovery, US Federal Reserve Chair Jerome Powell on Monday said the outlook for the world's biggest economy is "extraordinarily uncertain".

Escalating tensions with the US and the European Union, China's parliament passed a landmark national security legislation for Hong Kong on Tuesday.

On the flip side, demand in the physical bullion market, especially in top consumer China, continued to be weak, Commerzbank said.

China's net gold imports via Hong Kong in May fell below its exports for a second straight month, as domestic supply remained abundant amid a bleak demand outlook, data showed on Monday.

Also keeping a lid on gold's advance was a steady U.S dollar.